You’ll no doubt hear a lot of noise this morning about how terribly the amalgamated law-enforcement contingent working the Alton Sterling protest scene has treated its “victims,” but for two nights in a row the police force – consisting chiefly of the Louisiana State Police, Baton Rouge Police Department and East Baton Rouge Sheriff’s Office – has won.

How have they won? Two big reasons.

First, nobody has been seriously hurt in any of these protests, and that’s after some 150 people have been arrested. The worst injury occurred on Saturday, when some imbecile threw a frozen water bottle at the police line outside of Baton Rouge Police headquarters on Airline and Goodwood. Said imbecile managed to hit a police officer in the face and knocked several of his teeth out. In response to that, the police have simply made arrests where necessary, and they didn’t beat anybody up in doing it. 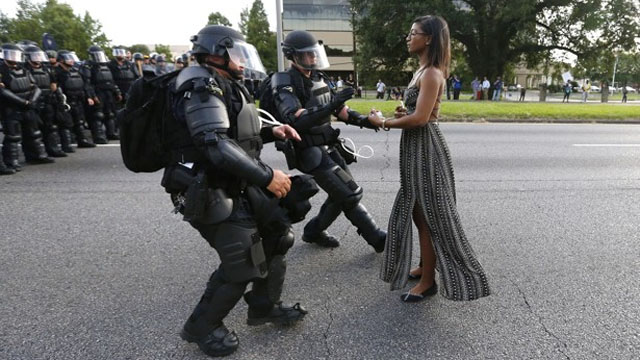 You’ve likely seen the photo just above, and it’s going to be iconic in showing the “brutality” of the police. But the fact is it shows the opposite. The very elegant and fetching woman in the picture is Ieshia Evans of New York City, and she’s being arrested for, like the vast majority of the rest of the protesters, standing in a roadway. She was breaking the law and she was arrested for it, but she wasn’t hurt and the cops simply came and grabbed her and whisked her off to jail, where she was shortly thereafter released. The cops might have been kitted out in riot gear, but she wasn’t tear-gassed, she wasn’t hit with a night stick and she wasn’t physically abused.

We know because she said so.

Second, and while the first part is very important this is a lot more important, the cops have stopped something from happening that other police forces around the country were not able to prevent – which is that protesters have occupied bridges on the interstate.

This was what they did in Memphis…

And here’s what they did in Atlanta…

This is something Black Lives Matter protesters have done countless times across the country, and as we said yesterday it’s what they tried to do on Saturday. The protesters in front of the BRPD headquarters marched down Airline Highway toward the I-12 interchange and attempted to occupy the road, but the police picked them off in sufficient numbers to deny them the interstate.

And then yesterday, they co-opted what was a very peaceful, positive demonstration consisting of a march from a church near downtown to the State Capitol steps and tried to turn it into a march up onto the I-10 bridge over the Mississippi. And it’s telling where this happened – Government Street, or most particularly the I-110 onramp near France Street. That’s the last onramp southbound on I-110 before the bridge.

The police, who obviously had intelligence this is what they were going to do, were waiting for them. The cops had all the hardware necessary to keep that crowd from going onto the interstate, and they made some 50 arrests.

Who got arrested? WAFB has some interesting information on that question…

According to the EBR Parish Prison booking sheet, all but seven of those arrested were from outside of the Baton Rouge area. The rest of those arrested are from Minnesota, North Carolina, Missouri, Georgia, New York, Washington D.C. and other cities from around Louisiana.

Among those arrested over the weekend was this whiner…

.@deray: “The rhetoric of the protest in no way matches the violence that police have been inflicting on people” https://t.co/U4RaKOkBr9

That’s Deray Mckesson, who is a “leader” of the Black Lives Matter movement and perhaps the best known of the tourists descending on Baton Rouge to stir up the mob. Mckesson was present at both Saturday’s and Sunday’s demonstrations, and he was among the people marching for the interstate both times. When Saturday’s protesters made a break down Airline Highway for I-12, Mckesson was among them and was pinched for being in the roadway. And the whining ensued on his Twitter to match what was in that CNN clip.

And there was a good lie thrown in…

.@Deray Mckesson speaks after being released from jail: Baton Rouge PD “only people that were violent last night.”https://t.co/DV3Pul4o3J

Tell that to the cop who had his teeth knocked out.

Apparently, the Parrish jail is now only taking money orders today & all of the banks are closed. #BatonRouge

We were temporarily detained in the downtown courthouse & my bookbag was apparently too big for the Parrish jail so they still have it.

You’d think somebody would explain to him that there is only one “R” in parish.

If you read through his Twitter what you’ll notice is Mckesson is one of the biggest crybabies in the history of civil disobedience. He bitches about everything – jail food, the lights, the fact the police had a high-frequency sound amplifier on hand yesterday (that they didn’t use), how the sheriff’s deputies at the jail said mean things, his charges not getting dropped.

Civil disobedience means you’re being disruptive and breaking the law, knowingly. It means if you get arrested you don’t complain about it; you accept that’s part of the territory and your willingness to be arrested for your cause is what makes you strong.

Martin Luther King, Jr. and his guys all knew that. They knew it because they had an actual cause, it was righteous, it was based on the truth. This bunch has none of those things – they’re little more than poseurs and naked revolutionaries in it for a paycheck and 15 minutes of fame on CNN. And it shows in their conduct.

This movement is going to fail, and badly. It’s going to fail because its premises are lies – the statistics make it clear that there is no discernible police violence directed at black people out of line with the amount of police contact with black people in crime-ridden neighborhoods, and the vast majority of police shootings happen in the middle of violent encounters the police didn’t initiate – which is just as true of the white people killed by cops as it is of the black people killed by cops. Not to mention BLM’s pet causes are almost always fraudulent – BLM created the “Hands Up, Don’t Shoot” slogan, which was an abject lie built around a false narrative that Mike Brown had his hands up when he was shot by a Ferguson police officer.

Black Lives Matter is an unofficial lobby for street criminals. MLK led a movement that was made up mostly of middle-class law-abiding citizens. The differences are obvious. 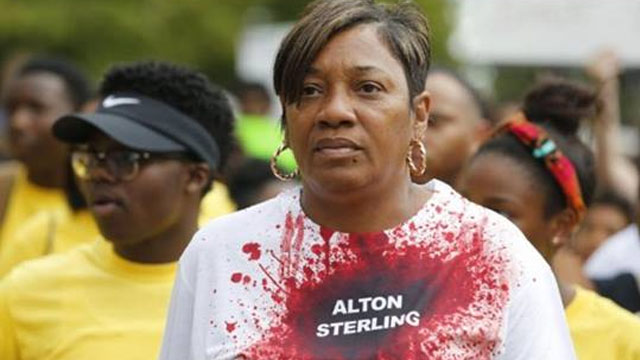 And now, for Today’s Last Thing. Something for the foodies… I know, right? Here’s how you make this…

Prep time:  15 mins
Cook time:  40 mins
Total time:  55 mins
Serves: 8 sservingss
You will need a 10 or 12 inch cast iron skillet for this dish. Please be careful flipping the cornbread out of the pan, do this at your own risk
Ingredients
Instructions

The thinking here is that maybe broccoli might not quite be the best bet as the vegetable here. Maybe bell peppers or even green beans would do better. But this is going to be good eatin’ regardless.