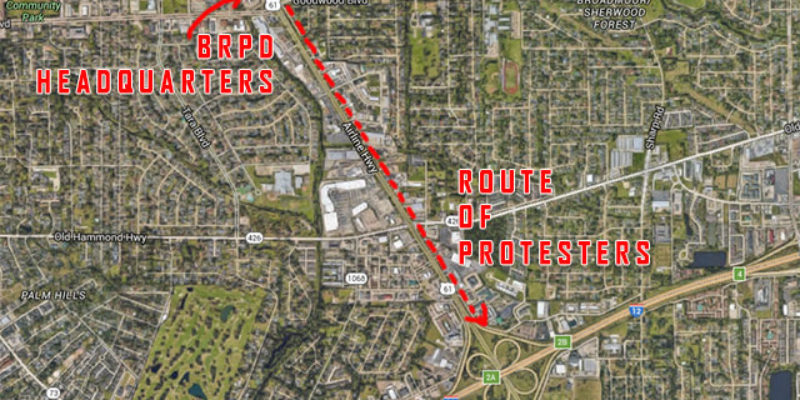 Lee Stranahan was one of many people arrested in Baton Rouge on Saturday night, and on Breitbart Daily News he went on and on about how unfair it was that he was arrested along with many other protesters (and two other journalists). He is really, really upset about it, and is blaming others for the fact that he broke the law.

“You know, obviously, anybody who’s heard me on the show or reads my work knows that there’s nobody who’s a more strident supporter of law enforcement or critic of Black Lives Matter than I am,” Stranahan began to explain on Sirius XM’s “Breitbart News Daily,” discussing his work on an upcoming documentary.

“And I gotta point out that at no point was anything ever explained to the protesters. At no point did anyone from leadership come out and talk to the protesters. And when we talk about the police here, I just want to be very clear on something — this is not individual police officers I’m talking about, because these guys didn’t decide on a Friday night, hey let’s just show up with long guns,” Stranahan said. “They’re ordered by people, and the Baton Rouge police have been getting horrible orders. Stand down was an order. Show up in full force and don’t explain anything is an order, it’s a policy. And this is a state that’s run by a Democrat governor, and it’s a city that’s run by a black Democrat mayor. OK? So that’s what the power structure here is. And they’ve been horrible.”

Now, the best case scenario here is that Stranahan is giving the right diagnosis to a problem using the wrong symptoms. Yes, Democratic administrations increase the power of the state to such an extent that police force and authority grows. That is absolutely a problem that we have seen in many places where similar incidents have happened.

John Bel Edwards nor Kip Holden had anything to do with the arrests. There is a law, one that says don’t clog up the streets, and he broke it. Even if the cops didn’t tell them why they were out there, that means nothing. Ignorance of the law doesn’t exempt you from punishment for breaking it. Stranahan is refusing to acknowledge this and instead wants to publicly whine and moan about the fact that he got to spend the night in prison instead of being a journalist and coming up with a really fantastic story on the people who were arrested and why they were out there in the first place.

But, it’s none of my business how he chooses to seek his attention, I suppose.

Interested in more news from Louisiana? We've got you covered! See More Louisiana News
Previous Article HITHER AND YON: Baton Rouge 2, Black Lives Matter 0
Next Article The Numbers Don’t Lie, The Baton Rouge Protests Are Being Led By Out Of Town Radicals