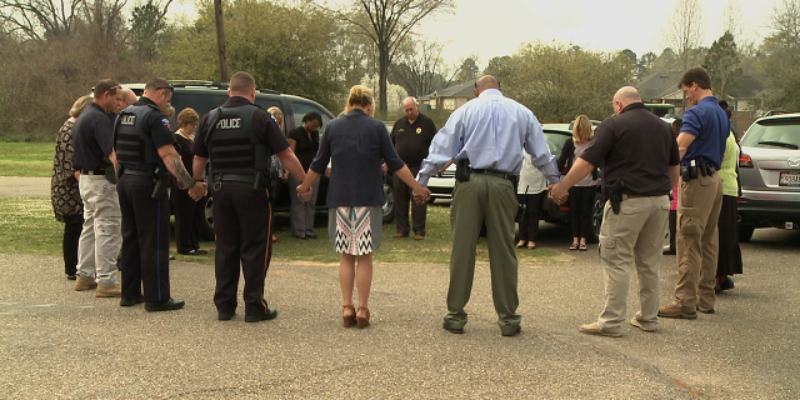 People all across Louisiana and the country have been trying to show their support for police since the Baton Rouge shooting. This is in stark contrast to many in Black Lives Matter who chant “What do we want? Dead cops.”

Slidell went out of its way to show that Blue Lives Matter. On July 26, 1,500 people got together and prayed for police at the Slidell Auditorium at an event called “Prayers for Our Peacemakers.” It was organized on Facebook.

Like many others around the nation, Eddie Junior “E.J.” Wells was concerned with the morale of law enforcement following the attacks on officers in Dallas and Baton Rouge. Wells lead the charge for “Prayers for Our Officers,” an event that started with inviting a few friends on Facebook to pray over the Slidell Police Department on July 26.

[…]After seeing the Facebook post, Carrie Calvin reached out to Wells and offered to make a Facebook event page. Within nine days, more than 13,000 people had been invited to the event. Nearly 1,500 people came to the event and local business owners reached out with swells of support.

Copeland’s of New Orleans restaurant fed a meal to officers and their families prior to the ceremony. Local businesses donated gift cards to be raffled off to the officers. Dominoes, CiCi’s Pizza, Hooters and NOLA Southern Grill donated and served food to the participants.

“I was blown away by the response, but at the same time I was not surprised because of how close everyone is in Slidell,” he said. “I want our officers to be treated like our pro football and basketball players are treated.”

America will be saved by ordinary people stepping up to support their communities. It will not be done by politicians writing laws.

Interested in more national news? We've got you covered! See More National News
Previous Article They’re Both Awful, And The Only Solution Is To Make Whoever Wins As Irrelevant As Possible
Next Article Why Is Rent So High In New Orleans (And The Rest Of The Country)?