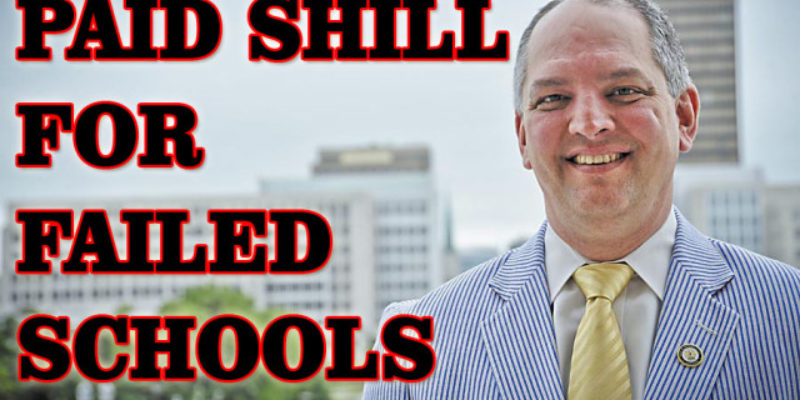 Louisiana schools are still terrible, according to WalletHub. The personal finance website surveyed Louisiana’s government schools and found them to be the worst in America.

Students here ranked 48th in math; 48th in reading; 45th in the dropout rate and 47th in average ACT scores, a measure of college readiness.

Also, the state finished 30th in student/teacher  ratios;  33rd in school safety and 37th in its percentage of licensed/certified teachers for students from kindergarten through 12th grade.

The state latest push to improve academic achievement began around 1999.

In addition, the state’s measuring sticks for key education indicators often ranks among the tops in the nation.

The state Department of Education acknowledges the survey results, calling them “unacceptable for our students and our families.”

The state points to improvements made in various areas. For example, Louisiana 4th graders had the highest growth of all states in reading and the second highest growth in math, according to the Federal government’s 2015 NAEP assessment. High school graduation rates are at all-time highs and Louisiana students improved their ACT scores. Louisiana is making progress and has made progress for nearly a decade.

But the little progress that has been made in this state is under threat. John Bel Edwards is nothing more than a shill for the teachers’ unions and school boards who would love to turn back the clock to the bad ol’ days. He wants to undo Louisiana’s education standards and teacher accountability. Finally, he wants to trap Louisiana’s children in failing schools.

We’re making progress, but we’re so far behind the rest of the nation that it won’t show up for years in national surveys. John Bel Edwards wants to take us further behind and undo that progress.

This survey shows that we can’t let him.

Interested in more news from Louisiana? We've got you covered! See More Louisiana News
Previous Article The FBI Alleges That Newell Normand Is Getting Kickbacks Through His Company
Next Article Newell Normand Says He’s Not A Crook