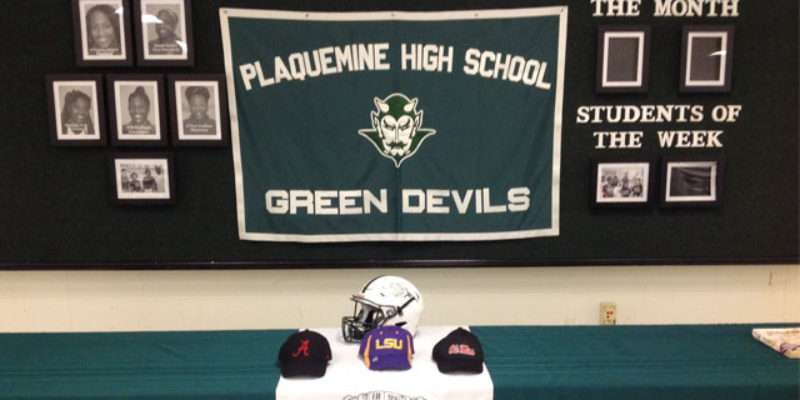 For the uninitiated, the world of high school athletic recruiting, a spinoff of college football and basketball fandom and the ESPN and Fox Sports and internet coverage which fuels it, has every ounce of the strangeness that describes other irrational subcultures. There isn’t quite a Comic Con for football recruiting, for example, but the various events surrounding national signing day in February are fairly close.

And in Baton Rouge, where LSU’s Gridiron Club does put on a Comic Con of sorts on national signing day, complete with jambalaya, beer and highlight videos from a site called Hudl which is something of a YouTube for high school football players, the subculture is as healthy – or unhealthy – as it is anywhere.

Given that backdrop it shouldn’t have been much of a surprise that the Todd Harris fiasco on Sunday would have made the impact it did.

Harris is a senior-to-be at Plaquemine High School, just across the Mississippi River from Baton Rouge. He’s a safety, one of the highest-rated in the country, and one of the top five or six players in Louisiana for the 2017 recruiting class. Most people seem to think Harris is set to sign with either LSU, Ole Miss or Alabama in February.

So when Harris put out the word on social media that Sunday afternoon he would announce his commitment for next year, the little town of Plaquemine became a big deal for a day. The recruiting world tuned into his Twitter account in rapt observance to find out what the 17-year old would say.

And after the big buildup, Harris made his choice…

Yeah. He committed to his high school team. So all the adults who put their Sunday afternoon plans on hold so that they could gawk at Twitter and be the first of their friends to know where a 17-year old was going to college became…disappointed.

And then this happened…

Todd Harris has me questioning my career choice.

Jimmy Smith is the recruiting writer for the New Orleans Times-Picayune. Mike Farrell is the national recruiting director for Rivals.com.

The conversation became, well, predictable from there.

@rivalsmike Disrespectful to ask folks to interrupt thier weekend to come see/cover that announcement. And then trick everybody.

what if someone got in a serious car accident on the way to this thing? https://t.co/gDm6aX7s5h

I don't blame kid, I blame adults in his life who let it happen https://t.co/SLn1mpHPQS

It turned out that Harris was only going along with a plan that Distefano, the high school coach, had put together in an effort to motivate his team…

“Look, it was my idea,” Distefano said. “Please, I don’t want anybody taking shots at Todd, because I asked him to do it and he agreed. There’s so much going on with social media and recruiting. It can overshadow everything. Our deal was this: We want our guys to understand how fortunate they are to go to a school like Plaquemine High, where they have opportunities academically and athletically.

“Todd is very committed to Plaquemine High and always has been. Today was just a way to show that as we get focused on our season.”

Whether you agree with what Distefano asked Harris to do, you have to admire the guts it took to do it. We’re in an age where high school football players climb out of sports cars to announce their commitment or do it in a slick video presentation.

It was an incredibly old-school ploy in a modern world. And it leaves us with one huge question: What will Harris do when he really does commit?

Chances are, we’ll have to wait a while for that.

But that wasn’t Smith’s take at all…

In a brief interaction with Distefano, it became apparent that he has no issue with what transpired, and that is troubling.

The responses from fans and college coaches was more harsh than the sentiments shared on Twitter by reporters. One college administrator sent me a text that reads: “Crazy man. I can’t believe Coach D thought that was a good idea…The kid is about to get killed.” And he was right.

Numerous threads showed up on message boards bashing Harris, stating that he was seeking attention and didn’t have any regard for the reporters solicited to cover the announcement.

Distefano is the leader of young men and it is his duty to protect his players at all cost. The business of recruiting is difficult to swallow for some, as an entire business has developed around tracking young 16-, 17- and 18-year-old kids, but it is here to stay and coaches need to develop an understanding of how to manage it.

Harris isn’t troubled by what happened, at least not yet, but others in the future may be. As someone who has spent the majority of my adult life in the recruiting world, I see both the good and bad in the business.

Unfortunately, some of the bad comes from high school coaches who put themselves ahead of the kid, as is the case here. Rivals National Director Mike Farrell, who has spent 18 years covering recruiting, is disturbed by what he witnessed Sunday evening.

“It’s honestly the most ridiculous thing I’ve ever seen in recruiting when it comes to live commitments,” Farrell stated. “It’s irresponsible and insulting to those who cover recruiting to ask them to come to a phony press conference and I think there should be some sort of repercussions. It leads by a very poor example in a copycat world.”

Things like this can not happen and there should be outrage by others in the community, at the school and from anyone who believes in protecting kids from being manipulated. Young men like Harris deserve better, especially from the head coach he has given himself to; the man he bleeds for on the field, sacrifices his body for nearly every day and obviously holds in high enough regard to follow his lead without questioning his motives.

One can sympathize with Smith’s position. After all, the way he sees it he has a job to do and being made a pawn by a high school football coach to essentially have his time wasted on a Sunday afternoon probably doesn’t quite feel like a Swedish massage.

On the other hand, Distefano is under zero obligation to make Smith and Farrell comfortable. Frankly, the hype and celebrity engine that media organizations like the newspapers and Rivals and other recruiting sites, not to mention TV networks and stations with their practice of airing stupid commitment spectacles – like this one…

…is so idiotic that it’s just crying out to be mocked.

And Distefano, who has athletes nearly every year being pursued by major programs and therefore fights off distractions the “recruiting media” imposes on him, decided to fight back a little.

For that, we’re supposed to be outraged? Really?

It’s worth it to chalk this up to competing agendas, and leave it at that. Is it dumb to make a mock commitment announcement? Sure. Is it a bad thing to mock the dopey subculture that recruiting has become, with the irresponsible way that 17-year olds are turned into celebrities whose every move is now given scrutiny by grown men?

If Distefano was able to chase attention away from his star safety and allow him to conduct training camp with fewer distractions as a result of Sunday’s stunt, he’s not going to be bothered one little bit by the “outrage” of Smith and Farrell and their colleagues. He has a job to do, and he’s well within his rights to trample over them to do it – all’s fair in love and war, after all, and it isn’t like the media attention on his individual players doesn’t make Distefano’s job more complicated.

For the rest of us who are more casual observers, this fiasco is a nice signal that maybe it’s time to leave those kids alone a little. They’ll choose a college when they want to choose a college, and while it’s not quite none of our business (as an LSU fan I’m interested in seeing Harris choose the Tigers; I won’t deny it, though it isn’t the end of the world if he doesn’t) it’s also not all that big a deal.

Perhaps if the adults would back off a little and be less fanatic about where these kids commit to a college we’ll have less stupid stunts with hats and gloves. And that, we could get excited about.

Interested in more national news? We've got you covered! See More National News
Previous Article HITHER AND YON: The David Duke Gnashing Of Teeth Has Begun
Next Article We’re Less Than Two Months Away From The Premiere Of Deepwater Horizon, And Here’s The Trailer