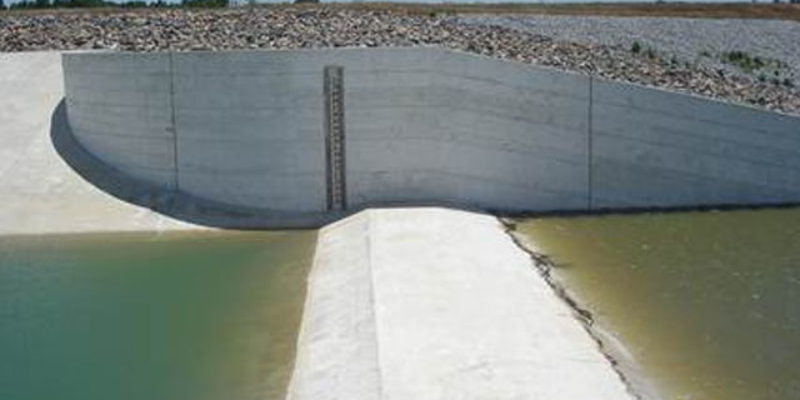 …especially since Rep. Garret Graves, who is not only the congressman for most of the Baton Rouge area but also something of an expert on coastal and water management given his former tenure running the state coastal protection agency, has gone absolutely ballistic about how the project has been on the drawing board for decades but never has seemed to get off the ground.

In case you don’t know what the Comite River Diversion Canal Project is, let’s start with a satellite image… 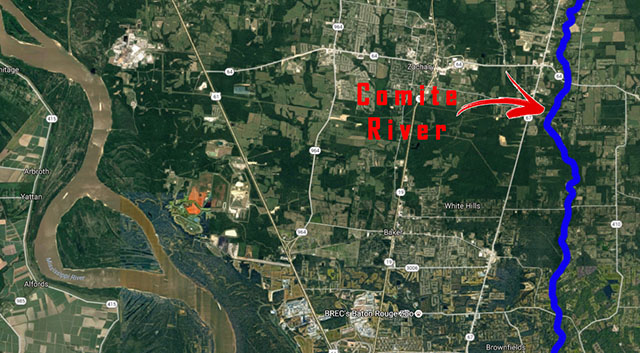 Obviously that blue line on the right side of the image is a little larger than normal – though not this past weekend.

You’ll notice that the middle part of the image shows a swath of undeveloped land running west from the Comite to the Mississippi, south of Zachary and north of Baker. And that’s the area where this project is supposed to be built… 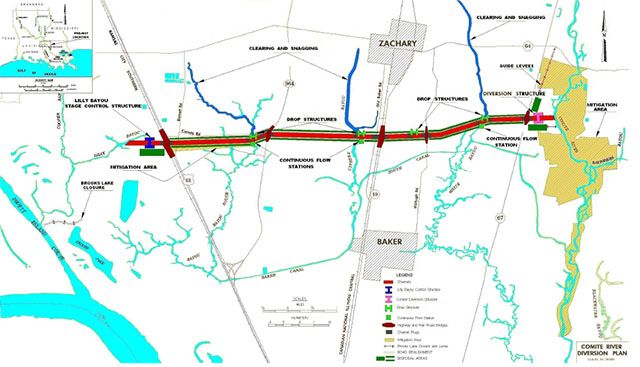 Lily Bayou is one of the very few bodies of water in the Baton Rouge area which actually does flow into the Mississippi.

You can see the beauty of this idea here – when there is an enormous amount of rain north of Baton Rouge which fills the Comite and makes for potential flooding downriver when it flows into the Amite River, if you have a diversion canal structure you can just open it up and let all that water run to the Mississippi. That should greatly reduce the potential for flooding – in Baker, in Zachary, in Central, in Greenwell Springs, in Denham Springs, in eastern Baton Rouge and downriver in Prairieville, Port Vincent, French Settlement, St. Amant, Gonzales and Sorrento.

There was a big flood in 1983. Two years later somebody dreamed up the idea of the Comite River Diversion Canal. We’re talking about 1985 here.

Naturally, 15 years went by and nothing overly significant was done about making that project a reality, though the Army Corps of Engineers greenlit the project in 1992. But in 2000, voters in East Baton Rouge, Livingston and Ascension Parishes approved a 10-year, 3 mill property tax to fund the project. At the time it was supposed to carry a price tag of $63 million.

Nothing good, that’s for sure.

Graves posted on Facebook a slide he’d found in some presentation on water projects, which perfectly illustrates how bad USACE is and how long they’ve been this bad… 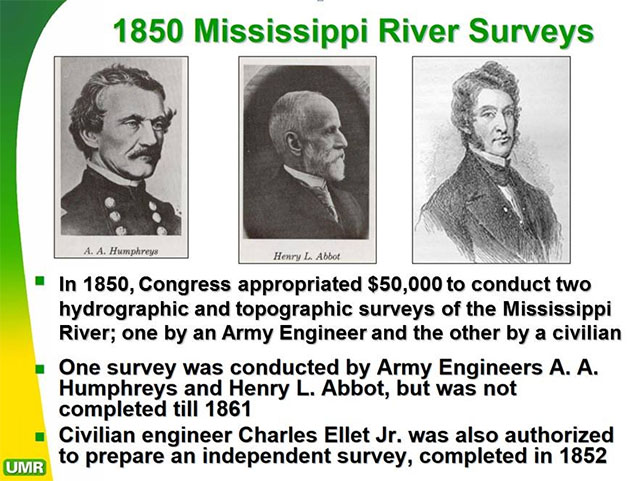 Nothing has changed since before the civil war.

The Corps of Engineers has bogged the project down with study after study, and even after that property tax was renewed for another 10 years barely anything has been done. In 2011, the Lily Bayou Stage Control Structure was finished, and that was a $35 million piece of the puzzle – that structure, if the canal is ever completed, would insure that Mississippi river water won’t backflow through the canal into the Comite. Construction has begun on a highway and railroad bridge on U.S. 61 and the Kansas City Southern line which runs next to it; that’s obviously going to have to be completed as part of this project.

Other than that? Bupkis.

The Amite River Basin Commission, which was set up as the state government agency tasked with spending that property tax money, is supposed to be in charge of securing the land for the diversion canal. A spot on that commission has for a long time been known as a nice political plum; you don’t have to do much of anything, and yet you get a nice per diem to go with a title. The commission collects that money, a couple of million dollars a year, and because of the bureaucracy of the Corps standing in the way only has the ability to spend it on little things ancillary to actually digging a canal. We’ve even heard they throw a hell of a Christmas party, though we can’t confirm that.

Meanwhile, it’s been three decades of haggling over things like “wetlands mitigation,” since the canal would displace a swampy area running between Baker and Zachary. Baker, Zachary and half the Baton Rouge metropolitan market is now a swampy area thanks to the canal never having been built, but it doesn’t appear that’s going to qualify as wetlands mitigation under the government’s stupid rules.

The ARBC is supposed to be buying land for those mitigation efforts, and two years ago it found itself on the receiving end of Sen. David Vitter’s ire for not having bought much of anything. But ARBC executive director Dietmar Rietschier has said all along that he’s dependent on USACE to actually have a project in progress before he’s able to engage in a systematic effort at land acquisition. Vitter didn’t buy that, but nobody is giving the Corps much of a pass for its efforts – or lack thereof.

And the Corps now says the project will need $211 million before it’s finished, which means this whole thing is impossible because the Corps doesn’t have any money. Graves gets red-hot at such statements, pointing out that 20 years ago the Corps was given money for the project and, rather than actually doing the work, sat around and allowed those funds to be redirected elsewhere. Now the project is nearly four times as expensive as it was supposed to be then, and there’s a $35 million flood control structure sitting off U.S. 61 with no water to control. One wonders if perhaps a wave pool could be installed there; maybe that way it could turn some revenue which could be used to fund the project.

When Richard Baker, who was Graves’ predecessor twice removed (Don Cazayoux and Bill Cassidy were the two holders of that seat in the interim), first fought to commence this project, he recounted having been told by a colleague that “As complicated and as big as this project is, Baker, we’re probably going to have to roll you up to the edge of the canal in a wheelchair when it’s done.” That was prophetic, obviously, though now that billions of dollars in damage has been done we probably will see some movement on the canal.

Back in April, Graves demanded the Corps be fired as the overseer of the project. In June, he wrote this…

Federal government failures impact each one of us. This was the topic of a recent discussion I led at the Association of Levee Boards of Louisiana held its 31st Annual Workshop.

Like LSU football in the fall or crawfish boils in the spring, paying for flood insurance is a fact of life for many home and business owners in Louisiana. Most of us are willing to deal with the threat of water because being a Louisianan is worth it. But the steady rise in flood insurance costs across South Louisiana are intolerable, and the fact that federal government failure contributes to those rising costs is unacceptable.

The US Corps of Engineers — the federal Rube Goldberg machine responsible for flood protection — is a posterchild for government inefficiency. Its inability to complete projects designed to improve our resiliency hurts our communities and increases our cost of living.

In places where flood protection projects have been completed, we’re seeing a downward trend in flood insurance rates — but those places are few and far between. The majority of Corps projects resemble Livingston Parish’s 30-year-old Comite River Diversion Canal project, which still sits incomplete.

Later this year, Congress will have the opportunity legislate the change taxpayers deserve through an important waters resources bill. We are working right now on amendments to that bill that will fundamentally change the bureaucracy for the better. If you’d like to learn more or share your ideas about this or other issues, email me.

Graves managed to get Congress to appropriate $10 million last year for the project. He’s got another $4 million coming this year. The flooding is likely to shake loose more – in fact, it’s not out of the question that some federal guilt might get the whole thing done.

But it’s like what Graves said back in April – talk about prophetic: “The federal government spends more money on FEMA claims than it would cost to complete this project.”

At a maximum of $32,000 per house, which is the number FEMA is talking about paying to the flooded folks in Baton Rouge who don’t have flood insurance, $211 million would cover only 6,600 of the tens of thousands of homes ruined by the storm. So yeah – the failure to build that canal is a perfect example of stupid, costly government.

Meanwhile, Baton Rouge mayor Kip Holden has been hustling to secure $175 million for a tram on Nicholson Drive between LSU and downtown that almost no one will use. If you haven’t seen much of Holden since the rain started falling, maybe that’s a reason.

Maybe Holden’s been drowning his embarrassment with the Corps of Engineers. They make good bedfellows, no?

Interested in more news from Louisiana? We've got you covered! See More Louisiana News
Previous Article This Is How You Can Help Teachers And Students Affected By Flooding
Next Article Finally Some Good News Out Of Baton Rouge As A School Plans To Reopen