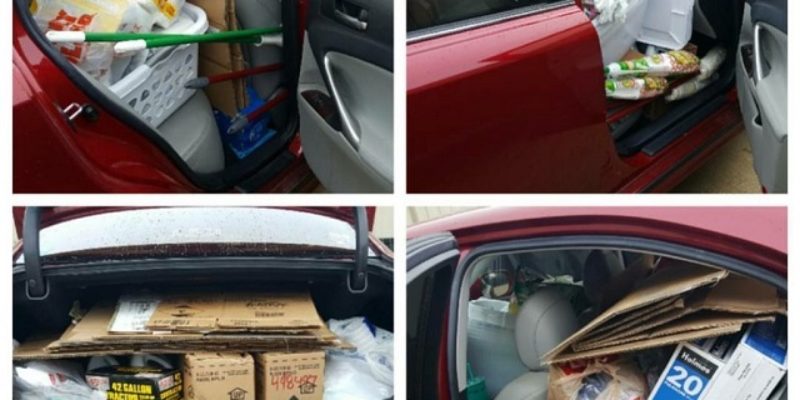 One of the things about the recent flooding here in Louisiana that should be inspiring is that private citizens have consistently outperformed government in disaster relief. The people of Louisiana have rescued, sheltered, and fed themselves pretty well.

Now we have a woman who is distributing more relief supplies than FEMA has so far. Sarah Joy Hays is a Baton Rouge area event planner who has used a GoFundMe account to nearly $18,000 so far to buy relief supplies. In addition, people all over the country have been sending her items. How she’s getting this stuff to people is the very interesting part.

Hays has become a point person in the entire city and now finds herself the point of contact for the mail carriers’ union and Trader Joe’s Community Outreach. The former contacted her because Hays home has become somewhat notorious among mail carriers both for the volume of mail being delivered daily — multiple truck loads arrive with just items from her Amazon wishlist several times daily — and for her generosity. Hays’ own mail carrier lost her home, and goes “shopping” in Hays’ living room for essentials such as underwear, undershirts, diapers and wipes. Word spread among other mail carriers, and now the union president has Hays’ personal cell phone number. Early this week Trader Joe’s contacted Hays to ask where food deliveries could be made.

Less than 10 days ago Hays’ living room was filled with her son’s laundry, toys and various work projects. Since the rain started, more than $40,000 of merchandise has passed through her home (not including over $14,000 donated via her GoFundMe), with 30 volunteers working to help open boxes, sort and deliver items.

When a carload of sorority sisters arrived, Hays sent them out in Ubers — with fares generously covered by the company — to make deliveries. Hays is also a liaison for a nursing home, a single mothers’ charity and several shelters that share their immediate needs for displaced residents in their care.

We have a new model for disaster relief developing here. Crowdfunding, social media, and the sharing economy are being combined to deliver immediate relief for people in need with a lot less red tape.