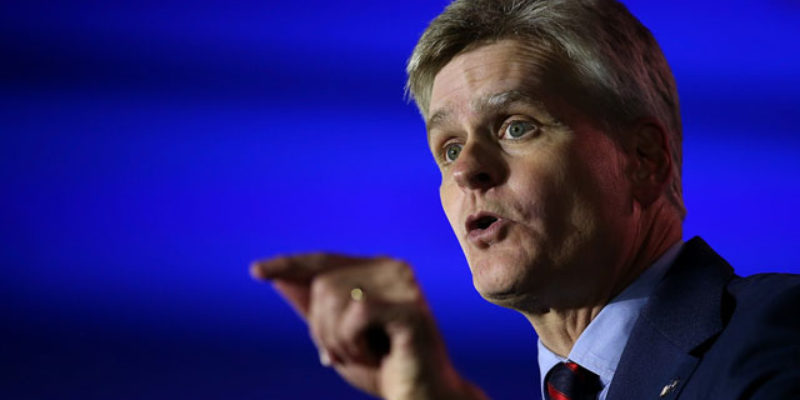 …Bill Cassidy is especially going to be beaten up on the issue. WWL-TV had a piece by David Hammer last night covering the “difficulty” involved for Cassidy, John Fleming and Steve Scalise since the three of them voted in the House against the $50 billion package for Sandy relief in January of 2013 – and since they’re going to be asking for a multi-billion dollar relief package for South Louisiana with respect to this flood, it’s obviously a political “problem.”

Hammer’s piece does include Cassidy’s response, though, which is a good one.

But Cassidy says he’s being consistent.

“I voted for Sandy relief,” he said. “What I didn’t vote for was $20 billion or so tacked on as pork unrelated to Sandy relief…. I want this to be related to disasters, and obviously, we’ve had a disaster in our state.”

Indeed, Cassidy voted for an early version of Sandy relief that would have cost $17 billion. But as it wound through the legislative process, that plan ballooned to more than $50 billion and ended up including money for NASA and oil spill research, along with other programs that appeared to have little to do with Sandy’s destruction.

Conservative critics of the Sandy spending called $16 billion of Community Development Block Grant money split among the affected northeast states and New York City “pork,” because of the flexibility for locals to spend the housing aid.

But CDBG Disaster Relief funds provided $10 billion for the single largest housing recovery program in U.S. history in Louisiana after Katrina and Rita, the Road Home, and Cassidy said he’s in favor of that type of funding for the flood victims of 2016, too.

“CDBG does have tremendous latitude in how it can be spent, but in a sense that increases the complexity. That’s not my job, that’s the state’s job. My job is to advocate once the state has given us that figure,” Cassidy said.

The question is whether you can get that message across – namely, that disaster relief is not something fiscal conservatives oppose, but disaster relief larded up with political goodies and patronage should be considered a disgrace and rejected outright by a responsible legislative body – in a hyper-partisan, dumbed-down media environment.

A trio of GOP Louisiana pols who showed little sympathy when they refused to vote in favor of funding for the Sandy-ravaged Northeast have asked for similar relief for the flooding that’s brutalized their state.

At least 13 people have died in the catastrophic Louisiana floods and some 60,000 homes have been damaged in what the Red Cross is calling the worst natural disaster to strike the country since Superstorm Sandy in 2012.

Three Louisiana lawmakers — Reps. Steve Scalise, John Flemming and Sen. Bill Cassidy — were able to get much needed relief from the federal government when President Obama declared a disaster in their state the same day they made a request.

That federal money will go towards grants for temporary housing, home repairs and low-cost loans to cover uninsured property loss, among other dire needs.

But those same pols were part of the 179 Republicans who refused to vote in favor of $50.5 billion in disaster relief when Sandy decimated New York and New Jersey in the fall of 2012.

Fleming, Scalise and Cassidy, by the way, are also climate change deniers, a sign that they’re unable to process evidence in front of their own eyes. Fleming has claimed that evidence of climate change is the product of a “radical environmental agenda.” Scalise has griped that it’s an effort by radicals “to prop up wave after wave of job-killing regulations that are leading to skyrocketing food and energy costs.” Cassidy in 2014 claimed that global temperatures had not risen in 15 years, which happened to be untrue. Remarkably, both Fleming and Cassidy are medical doctors.

No one is saying that the flood-stricken communities of Louisiana don’t deserve all the assistance that the U.S. government can provide them. But so did the residents of the Sandy zone. How do the lawmakers’ 2013 votes to deny relief to those Northeast communities square with their demand for emergency flood assistance now?

“Apples and oranges,” says T.J. Tatum, a spokesman for Scalise. To begin with, he explains, the money sought under the disaster declaration has already been appropriated; the declaration is merely a formality needed to authorize the Federal Emergency Management Agency to start spending it in the disaster zone.

The Sandy relief, by contrast, wassupplemental relief to cover recovery and rebuilding in the wake of the disaster. Scalise and Cassidy, according to their spokesmen, actually voted for a $17-billion initial appropriation for that purpose. But they balked at a further $33-billion chunk. A spokesman for Fleming’s office didn’t return our call.

So not being on board with global warming theory means you don’t have standing to ask for disaster relief. Check.

The opposition to the fat Sandy package including that $33 billion in extras wasn’t even to the extras per se. Scalise’s position was that if that money was so necessary then surely Congress could find other places in the budget to cut as an offset. But, says Hiltzik, there were no places worthy of $33 billion in cuts and surely the places Scalise suggested weren’t “responsible…”

But they almost certainly knew that their proposed offsets were sure bill-killers: They would have eliminated mass transit subsidies for federal workers and certain agricultural subsidies, among other things.

God knows we couldn’t squeeze any money out of agricultural subsidies. It would be devastating to the agricultural economy of Manhattan, for example, if the 1,500 recipients of farm subsidies in New York City were to have their freebies phased out. And mass transit subsidies for federal workers? Heaven forfend that should go away.

Initial estimates in Baton Rouge, covering about half of the parishes hit by the flooding, are that 110,000 homes worth a total $20 billion have been damaged. Business losses and reconstruction costs will come to much more.

Not to minimize the damage from the floods, or to lowball what the people of Louisiana are going to need, but those 110,000 homes are not all total losses; in fact, very few of them are. Most of them took a few feet of water and thus need new flooring, drywall, cabinetry and so forth; it’ll be a lot of work but the full value of the home doesn’t need to be replaced or anything close to it.

Not to mention that while most of the inhabitants of those homes did not have flood insurance, approximately a quarter of them did – meaning federal flood aid wouldn’t necessarily have to be spent on them.

And somebody who’s a “business” writer for the Los Angeles Times probably ought to know this.

As Cassidy said, there isn’t any inconsistency here. Louisiana’s delegation needs to ask for recovery aid from the federal government to make the affected areas whole, and no more. That will be a multi-billion dollar package, but one doubts it would need to be the absurd $50 billion spent on Sandy relief, much of which even Sandy victims would agree was waste. So long as that request is not irresponsible or excessive, the criticism of that vote back in 2013 as some sort of barrier to supporting aid for Louisiana’s flood victims is simply invalid.

But should that aid request contain cash for every boondoggle in sight, like passenger rail between Baton Rouge and New Orleans or Kip Holden’s tram up Nicholson Drive, there could well be a problem.

And there ought to be.

We have faith that’s not what’s coming, even though there are whispers Gov. John Bel Edwards and his staff see this as an opportunity to go for broke. Our guess is that Louisiana’s delegation is going to act in a fiscally prudent way and, other than using this opportunity to fund the Comite River Diversion Canal project and get it finished once and for all as a means of mitigating any future flood losses, limit the request to damage actually inflicted by the floods.

When they do that, perhaps Louisiana can set a standard for how to handle federal disaster relief in an ethical, defensible and responsible way. That will shame the partisans and media clowns who are now having a field day over those Sandy relief votes.