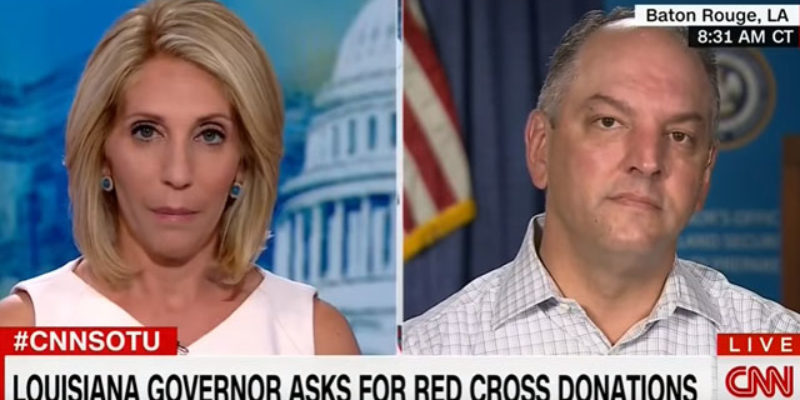 This isn’t exactly the worst appearance a Democrat governor of Louisiana has ever made on CNN; that honor would go to Kathleen Blanco for her admitting on a hot mic that she should have called for the military to help with the Katrina rescue operation in a more timely fashion.

But it isn’t the best, either.

You could see this one of two ways – either Edwards is admitting that it was wrong of him to trash Donald Trump in advance of his visit to Baton Rouge as seeking a “photo op” (which, in fairness, wasn’t actually Edwards’ statement but rather that of his media flack Richard Carbo, who might well be leaving soon to “pursue other opportunities” or “spend more time with his family” as a result), or he’s attempting to deny he reacted in such a fashion to the news Trump was coming.

But it’s awkward. One imagines it would have to be; Edwards committed a stupid mistake by suggesting Trump’s visit would be a photo op, and he got paid off for that stupidity when Trump showed up with a tractor trailer full of toys, diapers and other items flood victims needed and then dropped a $100,000 check on Greenwell Springs Baptist Church. So now he’s The Governor With Egg On His Face, and he had to go on CNN to try to rehab his image.

Judge for yourself whether he was able to pull it off…

Interested in more news from Louisiana? We've got you covered! See More Louisiana News
Previous Article CAGNOLATTI: Thoughts On The Great Flood Of 2016
Next Article VIDEO: Sean Hannity Makes His Way Down To Louisiana For Special On Flood Victims Airing Tonight