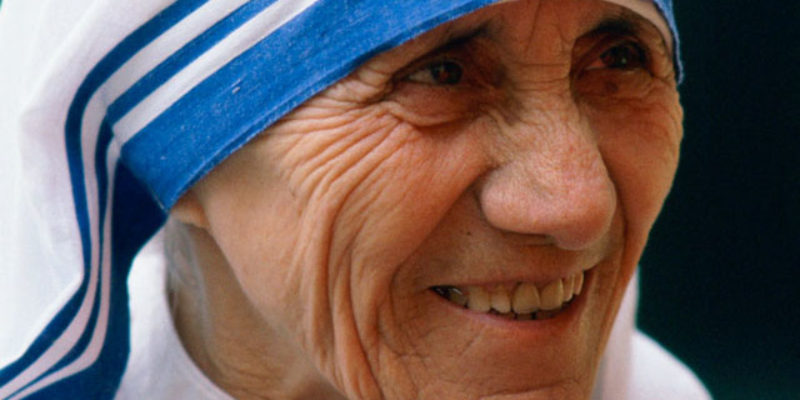 A few decades ago Mother Teresa was considered the international gold standard for goodness.

The diminutive nun born Agnes Gonxha Bojaxhiu in what would later become the capital city of the Republic of Macedonia had dedicated most of her 87 years to serving the most destitute people in the world clinging to existence in the slums of Calcutta, India.

As a leader she formed the Missionaries of Charity, which has drawn thousands of selfless women in their ranks to serve the poor.

In recognition for her work Mother Teresa received the Pope John XXIII Peace Prize, the Nobel Peace Prize, the Medal of Freedom, and was one of only two individuals bestowed with honorary American citizenship while alive.

When she died in 1997, India gave her a sendoff befitting of a national hero.  The place where she grew up in Macedonia has been transformed into a museum, Albania named their largest airport after her, and the Roman Catholic cathedral in the Kosovar capital of Pristina was dedicated in her honor.

Mother Teresa was one of the most respected, admired, and highly regarded individuals on the planet.

Yet in the almost twenty years since her passing, this remarkable woman whose name was synonymous with compassion is no longer universally revered.

Going into her canonization last week articles began popping up aimed at tarnishing the nun’s reputation.

“Why Mother Teresa Is Still No Saint to Her Critics” read one Washington Post headline.

“Troubled Individual Mother Teresa No Saint to Her Critics” read an oddly similar headline from CNN.

Earlier this year in anticipation of her sainthood, the Leftist Huffington Post ran a story titled “Mother Teresa Was No Saint”.  One sees both a pattern of belligerence and lack of creativity with the media’s smears.

NPR was a bit more merciful towards the Missionary of Charity running a story with the headline “Mother Teresa, Now A Saint, Was Not Without Flaws”, which ran with a commentary dubbing her benignly God crazy.

So what were Mother Teresa’s alleged sins?

For not doing enough for the Calcutta poor and for failing to run Manhattan-grade health care facilities in a corner of the world containing unfathomable misery.

That she rubbed elbows with the Duvalier clan of Haitian infamy.  If that was so terrible then such criticism should be replicated in the obituary of every Secretary and Minister of State who deals with odious individuals in positions of power.

If only Mother Teresa was given the same pass that the luxury living Clintons receive from big check-waving despots.

She vociferously opposed abortion wherever she went, though most notably while in the presence of the militantly pro-abortion Clintons. No need to justify this one.

Mother Teresa, by her own tremendous example, demonstrated how she valued human life at all stages, ministering in particular to those who have been treated like human refuse (those stricken with polio, infected with AIDS, and suffering from other fatal maladies).

And perhaps most “heinously” for propagating the Roman Catholic faith.  Apparently Mother Teresa was apparently only allowed to save lives not souls as well.

And it was not just the established media that has caused profound disappointment with their “fair and balanced” trashing of Mother Teresa, but regular shmoes on social media.

Links to the suicidal polemicist Christopher Hitchens’s attacks on Mother Teresa were en vogue on Facebook pages of folks who have problems with the modern day saint.

Why the urge to take a dump on someone who represented the very best of humanity?

Are we such a cynical society that we must engage in herculean attempts to level the moral standing of everyone, so none seem so high, mighty, and holy?

Or do we live in such a partisan world that anyone who opposes abortion is grouped as a right-winger whose reputation must be wrecked for the benefit of the progressive agenda and political movement?

The heat Mother Teresa has drawn is indicative that the once Christian nation is becoming something different.

In a period of seven years, affiliation with the three major Christian branches in America (evangelicalism, Roman Catholicism, and Protestantism) have fallen while non-Christian and unaffiliated have risen.

We are trading eternal truths for fashionable posturing, caring more how we are judged by our followers on Twitter than by our Creator.

America is transitioning into not just an irreligious country but to an anti-clerical society, where the only respected religious will be the Sister Simone Campbells types who distinguish themselves by their defiance from their own faith.  Their uniform isn’t the nun’s habit but deep blue Democratic jerseys.

If we live in a world where someone like Mother Teresa no longer commands broad respect, then we are going to a very bad place- first spiritually and then inevitably as a species.