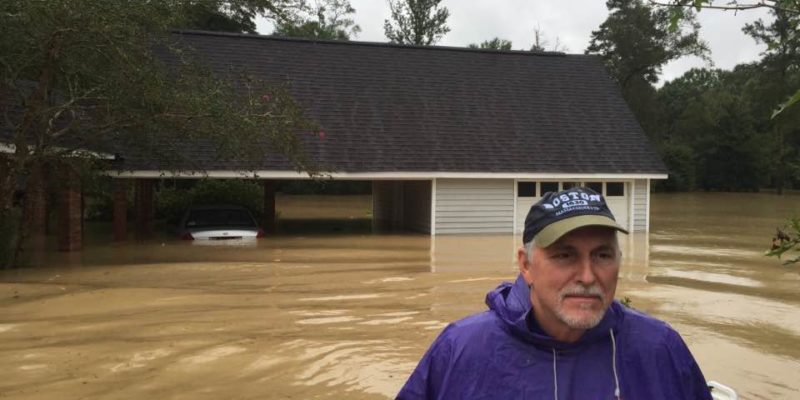 This is Rushing’s new daily uniform. His house flooded a month ago, and his days now consist of demolishing most of what he’s worked his entire life for.

Rushing’s life changed on August 13, 2016. His wife Jodi awoke to the sound of the Emergency Alarm System alerting the Florida Parishes in Louisiana of heavy flooding at around 2 that morning. The alarm goes off frequently, so South Louisianans pay little mind to it.

Jodi crawled out of bed to “just check” on her backyard this time. She is an avid gardener with draping crepe myrtles, knockout roses and towering magnolia trees shading the patio. The backyard boasts almost 20 years of work. The house sits on a hill about a half-mile from the Amite River, and while the pasture behind the house floods frequently their hill serves as protection from water.

However, this time was different. When Jodi checked on her flourishing yard, Amite River water lapped against their hill, only a couple of feet from their pool. Jodi, a typically unemotional person began hyperventilating; she knew her house was in trouble.

Dana jumped in his F-250; his mother and two of his brothers lived across the pasture and closer to the river. River water touched his brother Joel’s front door. Joel and his wife recently completed a kitchen renovation; the couple stood in their new kitchen, taking in their hard work one last time before Dana shoved them out into his truck.

Next, Dana went to his mother’s home. 12 hours ago she sat on Dana’s couch, holding a bowl of gumbo in one hand and a glass of merlot in the other. “If I flood, Dana, start building an Ark because God’s going to flood the whole earth again,” she said. Her comment was sarcastic, but she faced the next 12 hours completely unprepared for what those hours held.

Finally, Dana made it to his brother Perry’s home. Perry is the warden of the Livingston Parish jail, which flooded the day before. On Friday, hundreds of prisoners depended on Perry for their safety; Saturday his wife did the same.

Meanwhile, Jodi woke up her two kids and her kids’ visiting friends. They figured they had 30 minutes before the water arrived at their door. Pictures, birth certificates, old family VHS tapes and rugs piled onto elevated surfaces.

Her son Victor backed his F-150 into their garage. They loaded carpenter bags full of computers, shotguns, pistols and Bibles into the bed of the truck. Jodi grabbed an ice chest and filled it with good steaks, boudin, champagne and tasso.

Dana’s business partner showed up in his Jeep. At 3:00 a.m. Victor followed him out of their house. All the lights remained lit in the house and a load of dishes hummed in the dishwasher. The bottom of the driveway filled with water that touched Victor’s headlights.

They reached Dana’s business partner’s home, and as they sat down to drink a cup of coffee, Victor summoned them. Once again, everyone piled into the F-150 and headed back into the danger zone to awake their unaware neighbors.

Victor and his friends swam to the door of an elderly neighbor. She struggled walking, so Victor carried her as he paddled through the water. One of his friends swam with her walker above his head; the other waded through holding her Beagle. They passed snakes, opossums, turtles and sticks in the water, but they did not stop.

An operation of true country grit took place at the end of the Bend Road where the Rushings deposited the refugees. Tractors hauled people in trailers through an open pasture to safety. From there the people rode to Live Oak United Methodist Church where some slept that night.

After several rescues, Dana told Victor that it was time to leave. An old Ferguson tractor hitched to the front of Victor’s truck pulled the truck through the flooded pasture to safety.

There, clad in an LSU poncho, Turner Industries baseball cap and work boots, Joel greeted Jodi. “Can you find Jill and ask her to find a hotel room and a rental car?” he asked. Jodi complied and left for the church.

The same Ferguson tractor pulled Dana’s truck to dry land. However, unlike his family, Dana and his brothers loaded into a sheriff’s office boat in search of more people.

They rescued families from their attic. The family of a local Watson businessman floated on a mattress to their ceiling. They waited for help with their chins touching water and their bodies submerged. Perry arrived in time to save their lives.

By 5 o’clock Saturday evening, Dana and his brothers saved everyone they could. Dana tried to drive out of Denham Springs to Baton Rouge where his family sought refuge at his daughter’s apartment, but the streets filled with rushing water and he was unable to escape. He stayed at his nephew’s dry house in Watson that night instead.

The next morning felt like the next year. The Rushing brothers boated back into the area they worked so diligently to escape in order to check on their homes. The waters sat at 10 feet high, but receded out of all of the Rushing homes.

Dana, a contractor, went to work on his home. He recruited the help of men who did not flood to rip out drywall and insulation. The water line in his home sat at a foot; they cut the drywall at two feet.

The next day Jodi and the kids arrived with water and Gatorade and sandwiches and beer. Livingston Parish still sat completely underwater, so they drove up through Port Hudson, down through Jackson and out through North Watson to get to Bend Road.

That week, Jodi’s family arrived from Lake Charles. They cleaned some things and threw away most things. Dana’s younger brother Lane did the same in their mother’s home. By the following Saturday, Dana and Jodi slept in their own bed in their own house with half of their own walls and bare floors; they called it heaven.

Trash piles sit at the end of practically every driveway in Livingston Parish. The piles grow daily with wood floors, couches, children’s dressers and China cabinets. Dana uses his Kubota to push the trash out of his yard. He also finds serenity in the grumbling engine and squeaky loading box.

“My family has been here for 300 years and I’ve been here for 57 years,” Dana said. “I’ve never seen anything like this and I hope I don’t ever again. But I’m fine. My family is fine. I know God has a reason for this and we trust Him.”

Dana’s family has a long ways to go. They still have no walls or floors, but Jodi’s yard blooms brighter than before the flood. “I think that God is showing me something with how bright these flowers are,” she said. “I thought surely that they’d all be dead.” Maybe the Rushings are like the flowers; maybe they’ll come back stronger than they were before.