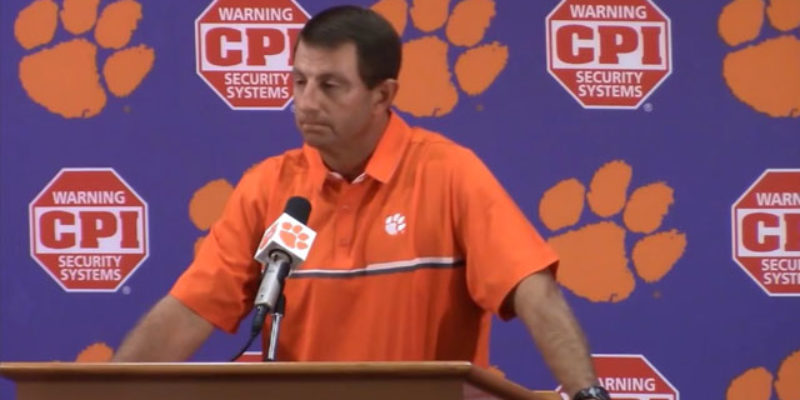 Dabo Swinney comes off as a good ole country boy with lots of personality and redneck charm, but the coach of the almost-2015 national champion Clemson Tigers showed in a press conference yesterday that he has a better understanding of the world around him than a lot of the sophisticates who purport to shape national opinion. Asked about the Colin Kaepernick/national anthem controversy and whether he’d discipline one of his own players who sat or kneeled at the playing of the anthem at a Clemson game, he said no, he wouldn’t discipline the player.

But then he offered his own opinion on using football as a platform for social awareness, in not so many words, and the message was extremely powerful. Swinney said all such public displays do is create division, and if Kaepernick wanted to do his Black Lives Matter thing all he had to do was call a press conference. “People would show up,” the coach said.

Then he launched into what he sees as the real problem. “We have a sin problem in this country,” said Swinney, who noted that there are good and bad people in every walk of life and in every demographic. He talked about Martin Luther King and how he changed the world, and the things which are reality now that King could only dream of half a century ago. And, though he warned that it isn’t politically correct to say it, he said that a bit more Jesus would drain away some of the problems the social justice crowd driving the national anthem controversy are pushing.

It was a tour de force of a cultural assessment, from an unlikely source. Swinney spoke the truth in larger amounts than perhaps anyone else on this issue.