When this all came out last week, we weren’t sure exactly what effect the allegations, contained in a chapter of investigative journalist Ethan Brown’s new book Murder In The Bayou about eight Acadia Parish ladies of the evening who apparently fell victim to foul play, that Rep. Charles Boustany was a customer of some of them would have on the Senate race. First of all, the allegations don’t really seem like something anybody would expect of Boustany, and second, there is a decent chance the public is hookered-out after last year’s governor’s race and the endless hype about David Vitter’s 15-year old allegations.

Then again, Vitter lost. And the last-minute dredging-up of scandalous allegations by a woman alleging to have serviced the Senator likely had some effect in letting air out of his campaign – particularly before the primary. So maybe hooker allegations still have a heart of gold where Louisiana politics is concerned.

But one thing is true – if your campaign gets hit with something like this, you need to be very good, and very lucky, in your response.

Boustany’s camp is pretty good at messaging, and their response to last week’s hype came today in the form of his wife, Bridget, sending out an email to the campaign’s supporters…

The wife of Republican U.S. Rep. Charles Boustany is defending him against prostitution allegations raised in a new book, describing “false attacks” that she says are aimed at disrupting his bid for a U.S. Senate seat in Louisiana.

In an email sent to supporters Monday, Bridget Boustany suggests her husband’s opponents are spreading the information, which she called “lies.” Bridget Boustany doesn’t use the word prostitution in the email, but she talks of people who have “called his character into question.”

“He’s a good man, a loving husband, and an incredible father to our two children,” Bridget Boustany says in the email.

In her email, Bridget Boustany talked of “false attacks aimed at bringing down a candidate who threatens to take the lead and win the race for U.S. Senate.” She also said: “Charles’ opponents have resorted to lies about him.”

Jack Pandol, Boustany’s spokesman, had already issued a flat denial of the allegations in the book which read as follows…

“These allegations are completely false and don’t even deserve a response. Dr. Boustany has a professional and personal reputation of honor and integrity. We are confident the people of Louisiana will see these lies for the political tabloid fodder they are.”

So under the circumstances, those responses are pretty good, n’est-ce pas? A forceful denial and an attempt to put others on the defensive without naming names is probably the best way to get on top of a sleazy, scandally dustup like this, and Boustany’s camp did a textbook job of executing that maneuver.

They might have been good, but we’re not sure they’re lucky. Along comes John Kennedy’s campaign with a response to Mrs. Boustany’s email, and it’s about as vicious a bit of chin music as you’re ever going to see…

“Earlier today, the Boustany campaign sent out an email alleging that my campaign and other candidates’ campaigns for the U.S. Senate played a role in the shocking story alleging illegal behavior from Congressman Boustany and his staff.  I want to be very clear that my campaign played absolutely no role in creating this story alleging Congressman Boustany’s sexual relationships with prostitutes that were later murdered, his staff’s alleged involvement in running the bar and hotel where this illicit behavior took place, or publishing the book Murder in the Bayou written by Ethan Brown and published by Simon and Schuster.

With just a few weeks left before Election Day, my campaign is focused exclusively on talking about real solutions to address our country’s problems. My wife, Becky, and I are keeping the Congressman, Mrs. Boustany and their children in our prayers as they deal with this as a family.”

And he closed with prayers for Boustany and his family. After denying any role in Brown’s allegations or his book and then repeating the allegations.

You always repeat the allegations. “For those who aren’t aware, someone I don’t know accused my opponent of shtupping a bunch of now-dead hookers at a hotel one of his employees used to own. And I want to make it clear that neither me nor the independent journalist that I don’t know has made the allegation that those hookers are now dead because of my opponent. You’ll have to make that allegation yourself, if you want to.”

Boustany probably had to say something, and he’ll probably have to keep saying something. But while the polls have shown a bit of a peel-off from the sizable early lead Kennedy had before, some of that probably came from the fact Kennedy has done everything he can to conserve his money for the end of the race; he’s lived off earned media all year, and after the legislative session ended he’s had less opportunity to go on TV and make news.

The Boustany sex stuff now gives Kennedy an opportunity to go back into the limelight with his classic concern-trolling rhetoric. For the first six months of the year he gave John Bel Edwards both barrels of that and drove the man insane with it. Now he has Boustany as his foil.

It’s possible to take that stuff too far, and perhaps Kennedy will. But it’s rare that a Congressman accused of, well, congress with prostitutes would benefit politically from the accusation.

At least we know the race won’t be boring.

Also involving the Senate race is this, which you’re on Facebook you might have seen in the last few days… 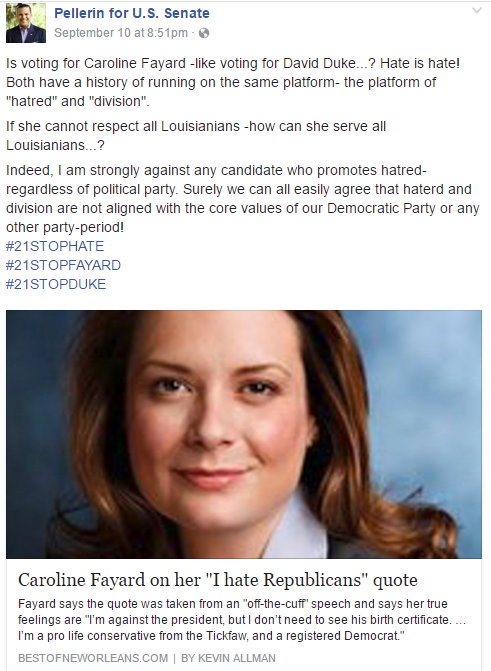 We figured it was a matter of time before somebody dragged Caroline Fayard’s infamous “I hate Republicans” quote back into the light, but what we didn’t figure was that it would be another Democrat, and that when it was done she’d be equated with David Duke. But that’s the kind of race we have.

Pellerin is little more than a blip in the polls at present. The conventional wisdom, or at least some of it, seems to be that it was Boustany who put him in the race in an effort to split the Democrat vote three ways between Fayard and Foster Campbell – which were it to happen, could very easily result in a Republican getting the runoff spot opposite Kennedy. Obviously the Murder In The Bayou stuff complicates that calculus and if Pellerin does make an impact on the race it’s not impossible that you might see John Fleming end up as the late-bloomer candidate who ekes his way into the runoff (current polling doesn’t show much chance of that, but with 24 candidates in the field who knows what can happen two months out?).

Regardless of where he comes from, it’s still pretty entertaining to see Pellerin tearing Fayard to shreds over that five year old dumb statement. We’re having almost as much fun with that as we are with the speculation over Hillary Clinton’s body double executing that photo-op with the kid outside Chelsea’s apartment in New York yesterday.

You already know what Today’s Last Thing is. Of course you do.

The Saints’ defense sucked yesterday and the Saints lost, which was eminently predictable. Drew Brees played a marvelous game, which was also predictable.

But what was not predictable was the 98-yard touchdown pass Brees threw to Brandin Cooks, which set a club record for the longest play from scrimmage. That should have been the play that put the game away, but it wasn’t – thanks to Delvin Breaux’s broken fibula and the complete abandonment of pass defense which ensued.

Anyway, here’s the video. You can forget about the game’s outcome and just watch it again and again.