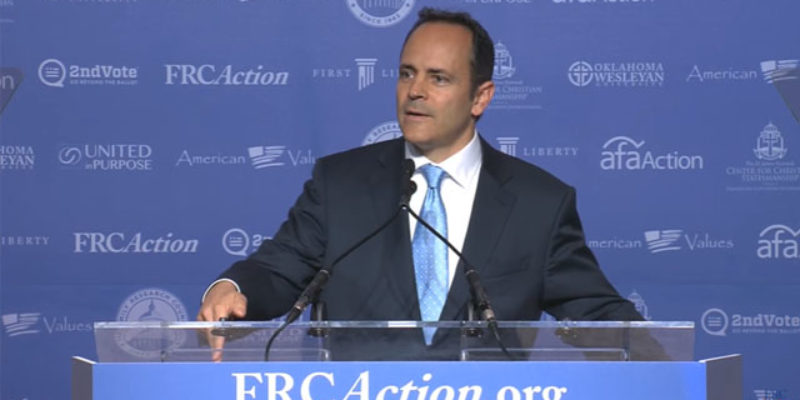 Kentucky Gov. Matt Bevin said conservatives may need to turn to physical violence in order to protect the United States against contemporary liberalism.

The Republican governor put forth the controversial suggestion after speaking of the “degradation of society” during an impassioned, 15-minute speech at the Values Voter Summit in Washington, D.C., on Saturday. The provocative comments started to gain national attention at the start of this week.

“America is worth fighting for ideologically. I want us to be able to fight ideologically, mentally, spiritually, economically, so that we don’t have to do it physically. But that may, in fact, be the case,” he told the crowd.

Bevin suggested that if Democrat Hillary Clinton were elected president, she would set the nation on a dangerous course that might require bloodshed to correct. He told the audience that the “candle” of liberty might go out “on our watch.”

To hammer home his point, he paraphrased a famous quote from Founding Father Thomas Jefferson: “The tree of liberty must be refreshed from time to time with the blood of patriots and tyrants.”

According to Matthw Yglesias at Vox, that statement was “really scary” and Bevin essentially was threatening violence against Hillary Clinton.

But of course that’s not what Bevin said at all – what he said was actually extremely sensible and a good wake-up call for the conservative movement.

Here’s Bevin’s actual speech. It’ll take up 15 minutes of your time, and it’s worth it.

What’s in that speech is not – NOT – a call to arms. It’s a call for conservatives to engage in the culture war and engage in political activism. To make phone calls. To speak up and speak out against the cultural and political aggressions of the other side, before those aggressions drive the country into such a state that recovery can only come at a terrible price.

And backing the call is a recognition that if you allow things to go so far down the tubes that liberty is all but dead and with it has gone our prosperity, the rule of law and the capacity for defense of not just the society at large against external threats but the individual capacity for self-defense, that price is blood.

This is the history of mankind, after all. It’s a never-ending struggle between liberty and tyranny. And while the founding of America was a great blow struck for liberty, we should never see that blow as decisive.

What Bevin is saying is that a bit of political and cultural boldness on the part of conservatives and traditional Americans now can obviate the need for a lot of desperation later. In this, his words aren’t any different from those of Ronald Reagan.

But that’s why Bevin has to be marginalized and made a lunatic by the mainstream media. He has to be cast as exhorting people to shoot Hillary Clinton, though her name isn’t spoken until almost 12 minutes of that video have passed.

Watch the speech. It’s one of the better political speeches we’ve seen in the past few years. And there is no exhortation to violence in it, only a recognition that on our current path the luxury and freedom we enjoy might require a physical defense – as it has throughout our history.