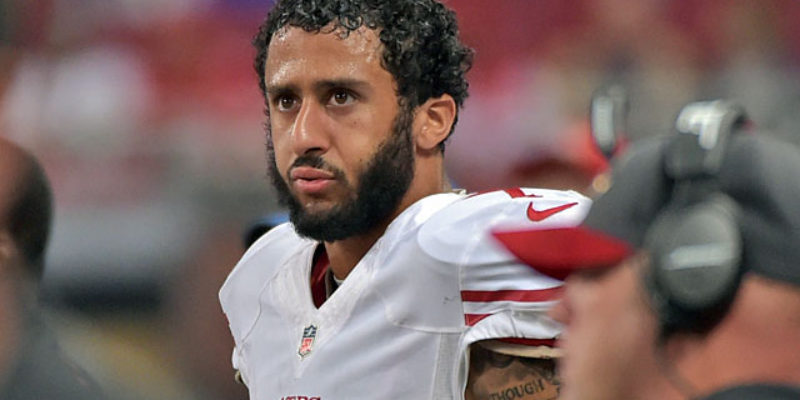 …I had an American Spectator column on the 49ers’ soon-to-be-let-go quarterback that went up last night, and in it I explained that what’s really going on with Colin Kaepernick is something like an a secret admission of failure.

It’s anything but shocking, then, that Kaepernick, who has reportedly converted to Islam and plans a Muslim wedding with Diab, cooked up the stunt of refusing to stand for the national anthem at his team’s games as a protest of the institutionalized racism Black Lives Matter makes such an issue of. One might be excused for seeing this as an exercise in goldbricking; if Kaepernick’s declining work ethic makes him unattractive to retain on the roster for football reasons, maybe pulling a PR stunt makes cutting him even more unpalatable for political reasons.

The piece talks about Black Lives Matter, which it looks like Kaepernick is attempting to position himself as a prominent figure in, as a smokescreen for the Left’s failure to successfully govern the nation’s urban areas. If America’s predominantly black neighborhoods were peaceful and law-abiding, if there were jobs to be had and schools which provided education and marketable skills, there would be little reason for aggressive police to come in contact with black youth on the streets and there would be fewer incidents to be styled as police brutality, racist conduct or “Hands Up, Don’t Shoot” style “murders” such as what Kaepernick says he can no longer stand for the national anthem as a protest against.

Therefore, what Black Lives Matter does is protect the Democrats from their failure to serve their own constituencies. They’re the Jewish trustees at the concentration camp. And their activities cover for the failure of their ideological cohort.

This matters with respect to Kaepernick not just because he says he’s going to embark on a career as a social justice warrior if and when he’s put out of the NFL, but because his turning to radical political activism is the same mask for failure.

Kaepernick is a talented player with a major flaw he doesn’t have the work ethic to fix – he’s always had a terrible throwing motion, and as a result he’s not a particularly accurate passer.

That’s a problem, because one thing which is true in the NFL is you can make a living as a running quarterback like Kaepernick has when you’re still a young player. But that’s not a prescription for a long career in the league; you’re going to get hit a whole lot if you’re running around with the ball, and you’re going to get beat up. As you get older, you’re going to have to learn how to stay in the pocket and deliver the football accurately to open receivers.

Kaepernick had that path in front of him, but what’s clear is that once he landed that $114 million contract and got the Egyptian communist/Muslim MTV presenter girlfriend, he no longer had the focus or commitment to become that fully-developed NFL quarterback he needed to be to justify the money he was going to make. Last year he was awful, and lost his job to Blaine Gabbert.

A quarterback with some character would take that failure as a challenge and redouble his efforts to improve his craft. He’d recognize that defensive coordinators around the NFL now understand the way to beat him is to contain him in the pocket and make him go through his progressions, and he was going to have to improve as a pocket passer. He probably would have to improve that throwing motion, which is really hard to do once you’ve established over the course of your life.

But he fell short with that. So instead, he took the easy way out just like the Left has. Rather than recognize you have to promote virtue among the citizenry and encourage individual freedom and achievement in the private sector, the Left engaged in more and more nanny-state socialism in the cities they governed and created ruins out of their jurisdictions, and to cover that failure they’ve now cooked up the distraction of Black Lives Matter. And in Kaepernick’s case, rather than face the music that as a football entity he’s too expensive and not productive enough he’s turned to social justice activism as a crutch. If San Francisco cuts him now it’s because they’re a racist organization which can’t tolerate certain points of view, and when the rest of the teams in the league similarly see him as toxic, well, that just proves the NFL is racist as well.

There’s a report out which says NFL general managers absolutely hate Kaepernick. The writer, Bleacher Report’s Mike Freeman (who sounds like a loyal Democrat), makes it sound like the front offices around the league are staffed with jingoists and right-wingers, but that’s not what’s going on at all. The one thing about the NFL which is also true of Major League Baseball, the NBA, the NHL and other pro sports leagues is that they make a living on producing results, and what they do is subject to immediate, clear accountability. They keep score, and they post standings. If you do good things you win, and if you don’t you lose and pretty soon you won’t be able to make the big money those leagues pay.

And for a general manager, the worst nightmare is that you spend a lot of money on a player you insert into your locker room, only to find out that instead of focusing on a job you’re paying him more than $10 million a year for, he’d rather focus on peripheral things that not only will he not change but will piss off your paying customers and create arguments in your locker room. That general manager knows if he’s responsible for introducing that kind of cancer to the roster he is inviting failure and rightly will soon lose his job.

For $12 million a year, it’s not a lot to ask that you spend your time contemplating hot routes and blitz pickups rather than trigger-happy cops in Ferguson. Once you’ve made that money and retired from the league after making yourself the best player possible you can spend the rest of your life as a left-wing activist, and nobody can tell you otherwise.

They hate Kaepernick because he’s wasting his talent. People who make a living identifying and developing talent cannot abide highly-paid professionals who waste theirs. It repulses them.

Kaepernick repulses them. He might have the right to express himself how he wants, but he should repulse us for his excuse-making escapism and underachievement. And the stupid cause he’s espousing ought to repulse us for the same reason.