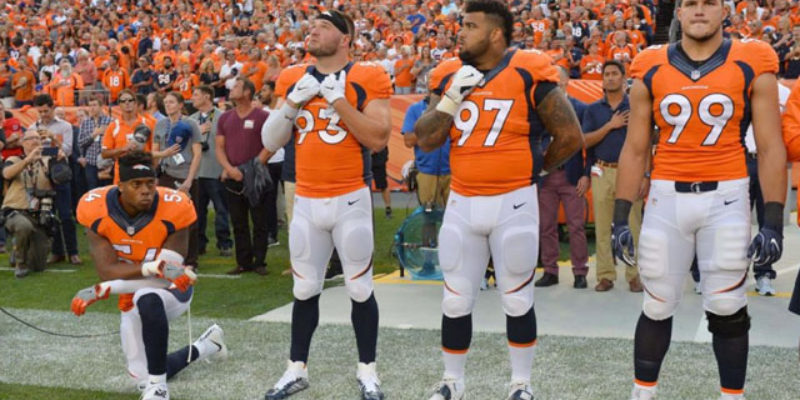 The big news you’ve likely heard by now is that on Sunday, the whole Seattle Seahawks’ team is threatening to sit, or kneel, or something in solidarity with Black Lives Matter for the national anthem prior to Sunday’s game.

This comes after Denver Broncos’ linebacker Brandon Marshall kneeled for the anthem last night before his team’s game with Carolina. In a case of cosmic justice, Marshall ended up with a concussion and a knee injury of indeterminate severity during the game.

And that came following the initial stupidity of Colin Kaepernick’s publicity crusade in the preseason, joined as he was by teammate Eric Reid.

This is an existential threat to the NFL. I’m not exaggerating.

One of the reasons the NFL has achieved such a prominent place in America’s entertainment pantheon is the unabashed patriotism the league has always been known for. The NFL has cultivated an image among its players elevating sacrifice, hard work, grit and teamwork to something like religious sacraments, and it has reached beyond itself to celebrate those traits in others. So there’s a big connection between the NFL and the military. There has always been a high level of appreciation between the league and first responders.

And yes, police as well.

And that civic connection between the NFL’s millionaire players and the tough guys in the armed forces or law enforcement who probably won’t make in a lifetime what some players will make in a single year has always been a cornerstone of the league’s public-relations success.

Allowing stupid assholes – and that’s what Kaepernick and his crowd are – to break that civic connection by bringing fringe left-wing politics based on a lie (Hands Up, Don’t Shoot, which was the basis of Black Lives Matter, is a lie, and so is the idea that racist white cops are systematically targeting innocent young black men on city streets across the country) is downright terrible for business.

It will destroy the NFL’s hold on the market. It will dry up the league’s profitability.

The NFL’s customer base is overwhelmingly white, middle class and suburban. I’m not going to say it’s overwhelmingly politically conservative or Republican, though there are studies showing that it tends more that way than other entertainment options or even other sports leagues (the NBA’s fan base, for example, skews more to the left than the NFL’s). It’s a good bet that the average NFL season-ticket holder is spending quite a bit larger fraction of his disposable income now on those tickets than he was 15 years ago given our stagnant national economy; it’s a lot larger sacrifice for many of those fans than it used to be to follow their team.

And you cannot piss those people off more than to have millionaire twenty-somethings, most of whom have been pampered all their lives as recognized talents on the way to pro sports careers, snub the United States of America at the national anthem out of some pose as oppressed people.

These are not oppressed people. Blue-chip athletes who got full scholarships to major colleges to play a sport and then multi-million dollar contracts, plus endorsement deals, are not oppressed people. Even if they grew up in lousy neighborhoods where cops struggle to keep the peace, few of them were ever oppressed. If they made it to the NFL it’s because people in their communities lifted them up out of the muck and put them in a position to be successful, and to their credit they took advantage of that opportunity.

And now they’re the one percent. Which, as football players, could only have happened in the good old US of A.

And when the fans of those teams gather before the game to sing the national anthem in celebration of the goodness of a nation in which such opportunity, prosperity, goodwill and enjoyment can be had, these people refuse to participate because of a protest of oppression?

You will not make those fans understand. They will reject this, and quickly.

BizPAC Review looked around on Twitter and found a hashtag the league office ought to be freaking out about. Namely, #BoycottNFL…

If more losers continue to disrespect our flag I will #boycottNFL I will hold owners and coaches accountable.

@Seahawks as a vet I will never watch a game that players sit for the Anthem. #myprotest #boycottNFL @NFL @espn

That’s just a taste. Search that hashtag on Twitter and you’ll see a major war going on.

And while no one should look at Twitter wars as reflective of society at large, it would be a major mistake for the NFL not to see the danger that pissing off its fan base, many of whom are so fed up with political correctness and leftist cultural aggression that they’ve actually decided to support Donald Trump for president of the United States, doesn’t constitute a threat.

Black Lives Matter has been bad for business for pretty much everyone who has stepped in it. If the NFL, and the 32 team organizations comprising it, allows a few stupid, entitled twentysomethings to present themselves as representative of the whole league without taking an official stand the fans are satisfied with then you will see fewer people in those seats. They’re expensive, after all.

It is Roger Goodell’s weak leadership which has allowed this. Goodell should have made sure the league stayed out of politics. He failed to do so and now the inmates are beginning to take over the asylum.