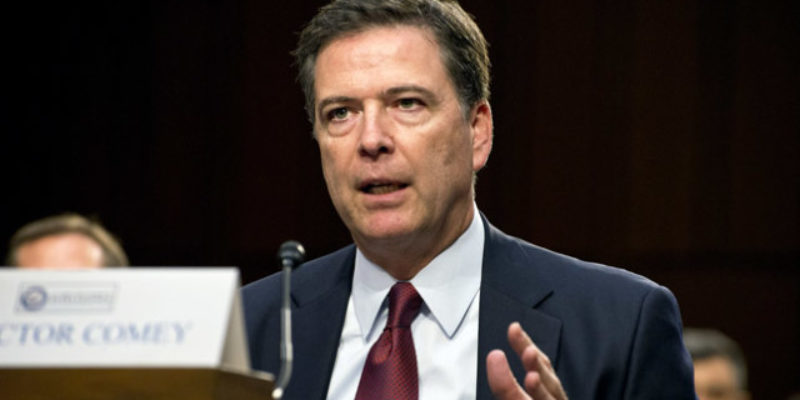 Seems so long ago.

We’re beginning to follow Joe DiGenova’s statements on a daily basis; after all, he’s the former U.S. Attorney for the District of Columbia and still has significant connections within the Department of Justice and the FBI, and with the Clinton e-mail scandal spreading a good deal of manure throughout the justice system DiGenova, who in his current practice represents a lot of government whistleblowers, becomes an interesting source for inside scoop.

And yesterday, DiGenova went on the air in Washington with WMAL Radio’s Larry O’Connor to talk about Comey and his conduct of the Clinton e-mail investigation. The results were pretty explosive.

“No trial level attorney agreed, no agent working the case agreed, with the decision not to prosecute — it was a top-down decision,” said the source, whose identity and role in the case has been verified by FoxNews.com.

A high-ranking FBI official told Fox News that while it might not have been a unanimous decision, “It was unanimous that we all wanted her [Clinton’s] security clearance yanked.”

“It is safe to say the vast majority felt she should be prosecuted,” the senior FBI official told Fox News. “We were floored while listening to the FBI briefing because Comey laid it all out, and then said ‘but we are doing nothing,’ which made no sense to us.”

That report made clear that there was never a grand jury empaneled in the e-mail investigation, which is almost unimaginable an a source for much consternation within the FBI. As Fox News’ source said, “I know zero prosecutors in the DOJ’s National Security Division who would not have taken the case to a grand jury. One was never even convened.”

Last week the New York Post also had a story about grumblings inside the FBI based on Comey’s conduct of the investigation, with this highlight…

“In my 25 years with the bureau, I never had any ground rules in my interviews,” said retired agent Dennis V. Hughes, the first chief of the FBI’s computer investigations unit…

“The FBI has politicized itself, and its reputation will suffer for a long time,” Hughes said. “I hold Director Comey responsible.”

If DiGenova is correct and the people he’s talking to within the Bureau are boiling over about Hillary’s e-mails and the fact Comey deliberately tanked the prosecution, which at this point is more or less a known item – even reliable Democrat Johnathan Turley called it a matter of legitimate Congressional concern when the news hit that five individuals were immunized from prosecution and then Clinton was cut loose – then this begins to get even more interesting.

After all, as we noted earlier today – at what point does the weight of the scandal surrounding Clinton so damage her that she can’t govern as president? What comes at that point?

Interested in more national news? We've got you covered! See More National News
Previous Article What Are The Chances Of Having A President Elected This Year Who’ll Be Too Damaged To Govern?
Next Article Tulane Expert: It’s Going To Take A While Before Anybody Is Drilling For Oil In The Gulf Again