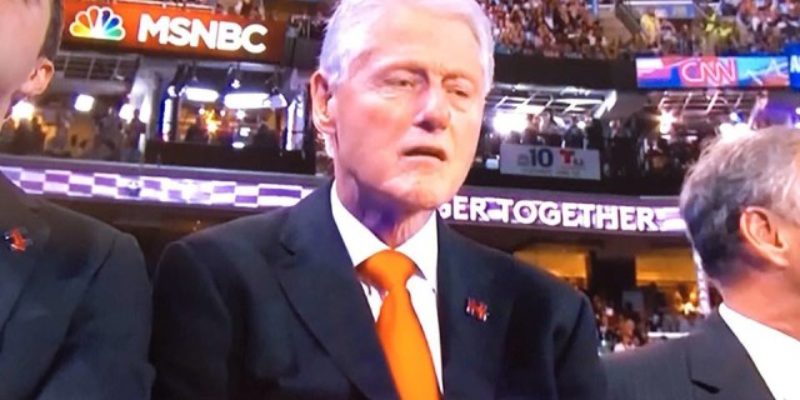 Have you seen the Drudge Report today? 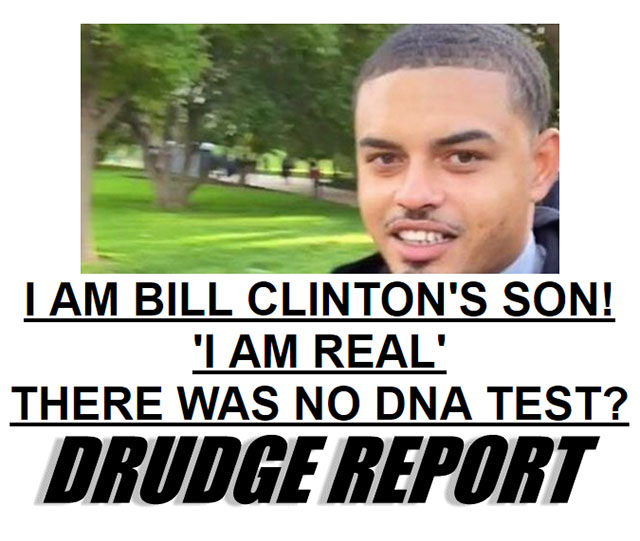 His name is Danney Williams, and his mother is Bobbie Lee Williams, who was a cocaine-addicted prostitute in Little Rock in the 1980’s and 1990’s. She claims that at the time Bill Clinton impregnated her in 1985 she had no other white clients.

Roger Stone, who is absolutely beneath contempt and is also Donald Trump’s political hit man, has been responsible for spreading this accusation. He’s been at it for some time. This clip is from January when he made it with Alex Jones…

Sure, it’s salacious, gossipy junk. And sure, the Trump campaign is dropping into the gutter dredging all this up.

But here’s why this fun – first, when you consider the size of the audience the Drudge Report gets, when Drudge runs with this stuff you can’t dismiss it as “nobody’s gonna see or care about that.” When it makes the top of Drudge, it’s going to be watercooler conversation everywhere.

But most importantly, what makes this interesting is the denial.

First of all, if Stone is correct – and I don’t know that he is, but it shouldn’t be all that hard to find out – that there was never a DNA test done to see if Danney Williams is Bill Clinton’s son, then it’s perfectly reasonable in the interest of transparency and full disclosure for the public to demand an independent one. The owners of The Star ought to come out and release what they have on the subject, so that we’ll know whether this allegation is debunked or not.

And second, if what we suspect is true and that Danney Williams is not actually Bill’s son there is another item.

Which is this – Bill Clinton used to comfort the women he sexually abused by telling them they wouldn’t get pregnant by him because he was sterile.

Following her 1978 encounter with Clinton, she says he told her not to worry about getting pregnant, because a bout with the mumps had left him sterile. If Broaddrick is a calculating liar looking to embroider her account, inventing such a detail would seem foolish, since two years later Chelsea Clinton was born.

But, as with most allegations against the president, the claim that he would say such a thing becomes, upon closer inspection, all too believable. For one thing, in his book Blood Sport, James Stewart reported that the Clintons in the late 1970s were concerned over not being able to conceive, and at one point “contemplated a visit to a doctor at the University of California.” It’s quite possible that in the spring of 1978, Clinton did believe that he was sterile, and he might well have ascribed this to a case of the mumps.

But whatever Clinton actually believed in 1978, there is evidence that he was in the habit of making this sort of claim to the women he encountered.

Two authorities on Clinton — Gennifer Flowers and Dolly Kyle Browning — provided THE SCRAPBOOK with further detail. Neither remembers Clinton saying that he’d had the mumps. But Flowers, who claims a 12-year sexual relationship with Clinton, says that Clinton “indicated he had a fertility problem. He never used the word ‘sterile,’ but he was pretty positive he couldn’t have children.” Browning, who claims a 30-year sexual relationship with Clinton, and who has known him since they were both children, says that she confronted Clinton about his habitual refusal to use a condom after she’d heard rumors that he’d been seeing other women. “I thought somebody might actually try to get pregnant by him and cause him a problem,” says Browning. “But he said, ‘Nobody should worry about my getting them pregnant.'”

All of this dates back to the last time the Clintons were in the White House, when the Monica Lewinsky-Paula Jones-Juanita Broaddrick-Kathleen Willey explosions were dominant news cycles every day.

It’s not particularly new stuff. But it’s newly relevant. And why?

Which – hey, judge for yourself… And this might be old stuff, but it’s also relevant stuff. Because if Danney Williams is Bill Clinton’s kid Hillary can claim to be the victim; she’d be the cuckolded wife of a talented but very flawed man. But if Chelsea is not Bill’s kid Hillary is no victim; she’s just as guilty of marital infidelity than he is. She might not have as many notches carved into her gun belt, but the old saw about there being no such thing as a little bit pregnant literally applies here.

No Republican opponent of the Clintons has pressed this line of attack as hard as Trump seems willing to press it, and the reason for that is the previous Republican opponents were serious people with a desire to win elections based on serious debates on the issues. Trump showed in last week’s debate that he doesn’t have the ability to do that, which is the number one reason he never should have been the GOP nominee.

But since this is who the GOP has, and since the only value in electing Trump is the destruction and retirement of the Clinton political machine, which in and of itself carries enormous value, then by all means let’s have all the Cliton dirt on the floor that we can. There is no limit to the depths Trump’s campaign should go in order to embarrass and make toxic the Clintons’ attempts to go back into the White House; they themselves have made this a national priority based on the Clinton Foundation scandals and her attempts to cover those up by use of her illegal and unsecure e-mail server. There are legitimate policy reasons which justify the most scorched-earth campaign imaginable against her.

And if the objection to this is that it would destroy a Trump presidency if it were to be achieved by such means, the response to that is, “So?”

The destruction of a Trump presidency is hardly a terrible thing. Should he resign or be impeached shortly into his term it would make Mike Pence, who has his flaws but is on balance an honorable and judicious man and a thoughtful conservative, the 46th president of the United States.

As for damage done to the office of the presidency by Trump being elected on a campaign of sleaze and scandal, that’s hardly a problem either. The presidency has grown far, far too powerful an office for the safety of our federal system and our individual freedom, and it would be to our great benefit to have a president who makes manifest the need to rein the office in. It’s long past time that Congress reasserted its traditional role as the primary maker of domestic policy and it’s even longer past time that the states begin to recover their sovereignty. If a distrusted and despised Trump were to preside – voluntarily or involuntarily – over the dissolution of much of the executive branch’s power, that is a feature. It’s not a bug.

So sure – let’s have all the Danney Williamses we can dig up. And let’s have this election devolve into the debauch it deserves to be. There was never a chance Trump vs. Clinton wouldn’t be an ignominious cock-up of a race, so let’s all embrace the suck. And let’s get those DNA tests from Bill, lickety-split.