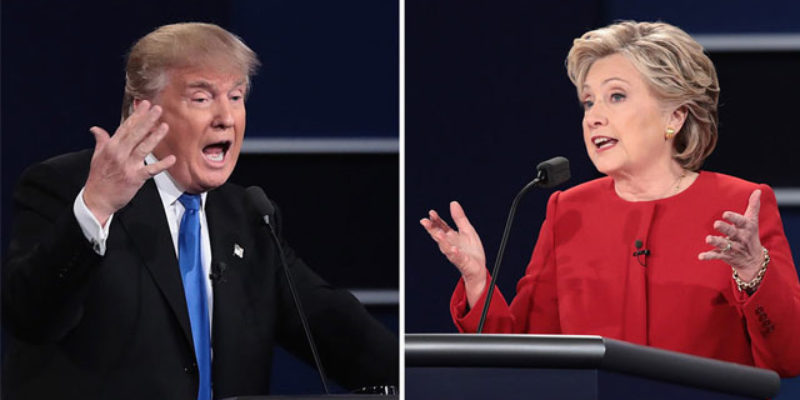 It was no surprise that the Commission on Presidential Debates which has a board of directors filled with liberal Democrats and establishment Republicans would pick liberal moderators for the presidential debates this year. They do it every four years in an attempt to help the Democrat presidential candidate. For some inexplicable reason, Republican presidential nominees agree to this biased treatment.

Four years ago, moderator Candy Crowley of CNN impacted the vital second debate and refuted Mitt Romney’s statements about Obama’s response to the Benghazi terror attack. She later admitted she was wrong, but the damage was done and Obama was boosted. In fact, all of the 2012 debate moderators were card carrying liberals.

In this election cycle, the debate moderators are all card carrying liberals, except for Chris Wallace of Fox News, who is a fair minded Democrat. As expected, the liberal moderator of Monday night’s debate, Lester Holt of NBC News, performed superbly for Hillary Clinton.

In fact, he did everything possible to assist Hillary Clinton. For example, he interrupted Donald Trump 41 times, but interrupted Clinton a mere seven times. He also allowed Clinton to filibuster continually on issues without directly answering questions.

Incredibly, Holt did not inquire about Hillary’s bungling of the Benghazi terror attack and her lies in the aftermath. Holt also neglected to delve into the Clinton Foundation scandal or Hillary’s obvious health problems. Clinton’s email scandal was only mentioned in passing by Donald Trump and Holt gave it only a few seconds of coverage, as an aside.

While completely giving Clinton a pass on her many controversies, he asked Trump almost every tough question he could possibly include in the debate. He pressed him on his failure to release his tax returns, his supposed mistreatment of women, and the controversy over the release of President Obama’s birth certificate.

Although he grilled Trump, Holt failed to address vitally important questions that impact millions of Americans. Nothing was asked about the Affordable Care Act, or the critical questions of illegal immigration and border security. He did not ask the candidates how they will restore a military that has been decimated during the Obama years. Not surprisingly, he interrogated Trump about his claim to be opposed to the war, but did not ask Clinton if she regretted supporting the war in Iraq.

Interestingly, Neil Cavuto of Fox News backed up Trump’s claim to be opposed to the war in Iraq. After the conclusion of the debate, he aired a clip of their interview in January of 2003, before the war started. In that interview, Trump expressed great reservations about the war and said there should be more focus on the economy.

During the debate, Holt talked about homegrown terror, but did not question Clinton about her failure in stopping the advance of ISIS. Instead, Holt addressed a multitude of liberal talking points. He asked about “income inequality,” and why Trump wants to give the wealthy tax cuts.

As expected, Holt mentioned race relations and the racial overtones of “stop and frisk,” a policy that Trump supports. However, he mistakenly claimed that “stop and frisk” was unconstitutional. Holt also focused on police relations with the black community and the assertions there are too many biased officers who engage in racial profiling.

The only liberal talking point that Holt failed to mention was climate change and Trump brought that up to ridicule Clinton’s statement that it is the greatest threat facing the world.

As an objective moderator and journalist Holt failed even more miserably than Candy Crowley did in 2012. Nonetheless, he delivered a magnificent audition for the position of Press Secretary should Clinton win the White House.

For those still skeptical of bias, on Friday, the Commission on Presidential Debates made an incredibly convincing admission. In a one sentence statement, the supposedly objective group acknowledged that “there were issues regarding Donald Trump’s audio that affected the sound level in the debate hall.”

This week, Trump complained about his microphone, but it was dismissed as sour grapes from the debate loser. Now, his comments should not be so easily disregarded. He said, “my mic was defective within the room…I wonder, was that on purpose?”

Yes, Donald, as with the selection of moderators, it was on purpose! At this point, he must say only one more thing to this prejudiced commission. In fact, he should give his signature response which made him a household name in America, “you’re fired.”