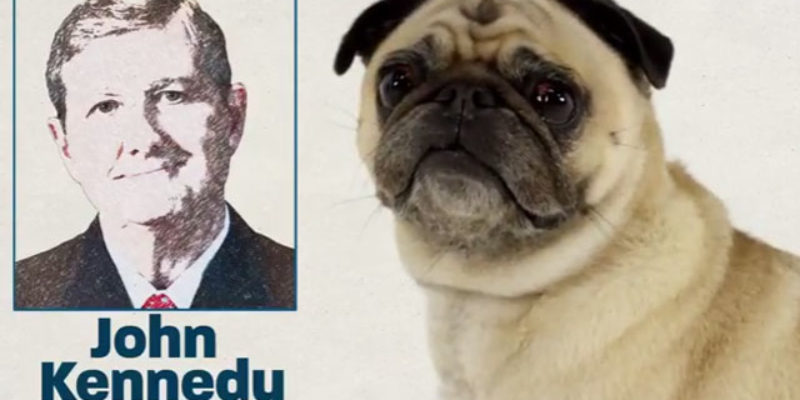 That’s an objective statement, by the way. There haven’t been too many good ads in this race, which is one reason why there’s a consensus it’s been dull.

This ad isn’t dull, however. It’s the first legitimately entertaining ad of the whole campaign on any side, and if it doesn’t help Boustany we’d be surprised.

First of all, you just can’t beat a cute dog in a TV ad. Animals are awesome in politics, and it’s surprising they’re not used more often. Put a tie on a dog and make him a politician, and folks can’t help but laugh at your TV spot.

And in the case of Kennedy, there is no arguing with the contention that he’s a publicity hound. He is. It’s a central tenet of his political strategy – he’s the guy who’s good at going on TV and radio and getting earned media exposure for himself, and doing that has made him the most popular public official in the state. It’s a media age and people like politicians who communicate using the media, regardless of the problems that brings with it.

Good politics usually involves turning your opponent’s strength against him. Where Boustany is concerned, that involves using Kennedy’s strength in communicating via the media to make him a shameless attention whore, and casting his having done so as evidence he lacks substance. Which means ridiculing him. And using a cute dog to do that is effective.

If Kennedy has a better ad than this, he’s going to want to pop it out. If we were advising Boustany we’d suggest backing this ad with as much air time as TV stations throughout Louisiana can sell him.

Interested in more national news? We've got you covered! See More National News
Previous Article PRAGER U: Immigrants! Don’t Vote for What You Fled
Next Article Part 3 Of The Project Veritas DNC Expose’ Is Out, And We’ve Now Got Hillary Breaking The Law Again