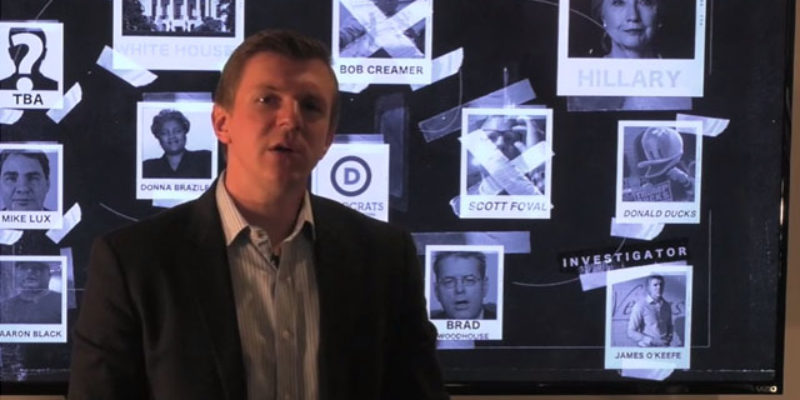 In this case, the violation involves illegal coordination between a political campaign and third-party groups – specifically the Clinton campaign and Americans United for Change, the non-profit Democrat group run by former Democrat National Committee spokesman Brad Woodhouse for which Scott Foval and Bob Creamer, the two targets of James O’Keefe’s investigations (Part 1 of which can be seen here and Part 2 of which can be found here), have worked.

We say “have worked” because Foval, the former AUFC field director, was fired last week and Creamer, while it appears he’s still affiliated with the organization, has “stepped back” from the DNC and the Clinton campaign.

The object of this coordination is the practice of sending people to Donald Trump rallies in Donald Duck suits, ostensibly to send the message that Trump has been ducking the release of his tax returns. This was, according to Creamer, an idea hatched by Hillary Clinton herself – which should give you an indication of how lame the thinking of the likely next president of the United States really is (you should already know that given the “reset button” disaster with the Russians from 2009).

Where things became illegal was that Clinton was going to use the DNC to supply the Donald Ducks – but current DNC chair Donna Brazile has a contract to do talking-head punditry for ABC News, which is owned by Disney, which owns the Donald Duck trademark, and if it was the DNC sending Donald Ducks out to harrass Trump it was going to make a big mess.

So instead the Donald Duck operation was farmed out to AUFC, which solved Brazile’s problem. Except it was still the DNC and the Clinton campaign directing AUFC’s use of the people in duck costumes – where they’d go, when they’d show up and so forth.

And as O’Keefe explains in the video, that’s exactly the kind of direct coordination the law prevents.

But this isn’t really news, because we already know the Democrats are more of a criminal syndicate than a political operation. The idea they’d follow the law when it’s inconvenient to them to do so is laughable. They don’t, as we’re all well aware.

The laws on campaigns coordinating activity with third parties are largely useless and overly Byzantine. But they were written by Democrats in Congress after the Watergate scandal, so it isn’t like the Democrats can complain about them. Hillary broke the law, as she always does, and as we know she’ll get away with it once again.

But at least, thanks to O’Keefe and Project Veritas, it’s documented.