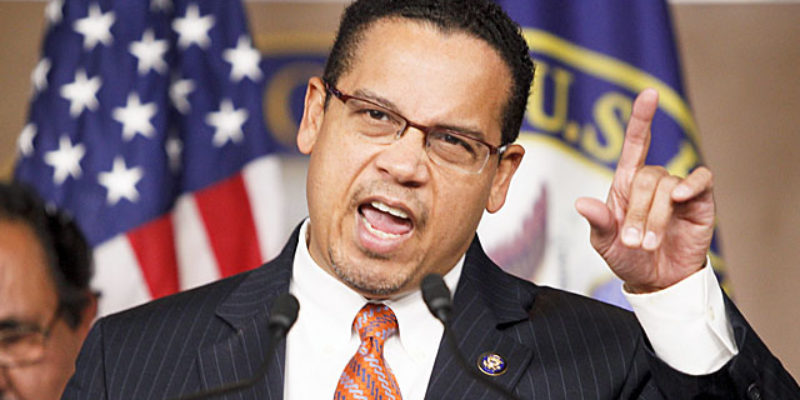 According to POLITICO, it’s quite possible. That party is an absolute mess thanks to the surprise loss of Hillary Clinton on Tuesday.

Swept from power, Democratic leaders in Washington and the states are increasingly nervous that the best-case scenario fight for the chairmanship of the Democratic National Committee will be a long, ugly redux of the Hillary Clinton vs. Bernie Sanders primary.

But an even broader, more vicious factional scramble may be looming.

A group of high-profile liberals and establishment figures are moving swiftly to nip such a tussle in the bud by coalescing around Minnesota Rep. Keith Ellison — who has not formally announced his bid, but who appears prepared to on Monday after receiving backing from Sanders, Senate Minority Leader Chuck Schumer, progressive groups like MoveOn.org, and kind words from Sen. Elizabeth Warren. But former chairman and Vermont Gov. Howard Dean — a Clinton backer and serious Sanders critic during the primary who is a favorite of state party chairs due to his pioneering a 50-state strategy that would empower them — also jumped into the race on Thursday, making the picture far less straightforward.

So – Keith Ellison, a black Muslim who’s on paper defending Louis Farrakhan against his anti-semitism and in FEC reports taking contributions from CAIR (with whom he has a sparklingly close relationship), or that old nut retread Howard Dean? Is that all they have? Surely the Democrats can come up with someone else, right?

Meanwhile others in the party, including New Hampshire Democratic Party Chairman and DNC vice chair Raymond Buckley — who runs the Association of State Democratic Chairs — South Carolina Chairman Jaime Harrison, and House Democratic Caucus Chairman Xavier Becerra are said to be open to bids of their own, fielding calls from other DNC members about their interest. Former presidential candidate and Maryland Gov. Martin O’Malley said on Friday morning that he is considering a run. DNC vice chair R.T. Rybak, the former mayor of Minneapolis who nearly got the role under Barack Obama, and retiring New York Rep. Steve Israel — a former Democratic Congressional Campaign Committee chair — are also in the mix.

Ultimately, what this sounds like is a rehash of the Sanders-Clinton primary fight – except this time the Clinton machine isn’t organized enough to rig the competition.

And the party has lost so many elections at the state and local level in the past eight years, they barely have any mainstream political figures left. They barely understand how to win outside of safe liberal enclaves, no matter how heavily populated those might be.

That isn’t going to improve if the new face of the Democrat Party is Keith Ellison. If he’s the new DNC chair, they’re going to have even more trouble attracting voters.