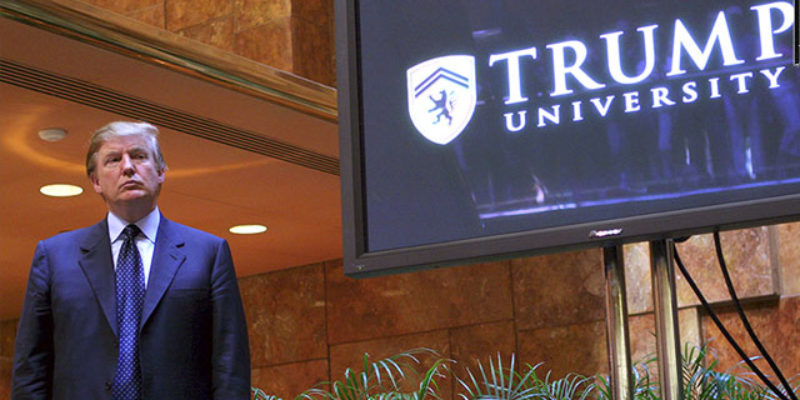 …and that could make for a nice payday for the plaintiffs. Donald Trump is going to need this out of the way in advance of his inauguration and the clock is ticking.

President-elect Donald Trump wants to delay the federal fraud trial he faces here Nov. 28 until after his inauguration in January, his attorney told a judge on Thursday, two days after Trump was elected president.

When the judge asked why, Trump’s attorney, Daniel Petrocelli, summed it up like this:

“In view of Mr. Trump’s election as President of the United States, your honor.”

Petrocelli also questioned whether Trump actually would be available to testify in court as a sitting president. He said never has there been a case in the history of the United States in which a president had to come into court to testify in a trial as a defendant. Trump might testify by video instead.

Curiel said he understood and said it would be wise for the two sides to settle the case, a class-action fraud lawsuit involving Trump and his now-defunct Trump University.

The lawsuit was filed in 2010 on behalf of former Trump University customers, who alleged that the Trump University real estate courses didn’t deliver what they promised. They claim they were ripped off and lost tens of thousands of dollars after being misled about it.

At Curiel’s suggestion, Petrocelli said he was open to the help of another federal judge, Jeffrey Miller, in trying to find a way to settle before trial.

“I can tell you right now I’m all ears,” Petrocelli told Curiel.

Petrocelli said he would make a formal request to delay the trial by Monday. After court Thursday, Petrocelli told reporters Trump wanted to testify in person before his election as president.

“Now he’s going to have to take into account whether that’s the best use of his time, and he has to weigh his desire to be here against the needs of the country right now,” Petrocelli said.

Curiel, the judge Trump castigated as a Mexican whose objectivity was in question, wasn’t impressed with the idea of delaying the trial. He said the trial would last into mid-December if it started on time, which would make for a mess with the transition.

Trump should have gotten this case out of the way and settled it, maybe before he even decided to run for president. He didn’t settle it for fear that it would make for bad political optics – he said it was because the case was BS, but that’s not why he didn’t settle it. That was a mistake, and now the case will be used to delegitimize him by the media.

And it could be worse than that. If the trial resulted in a verdict that Trump was guilty of fraud that could create grounds for an impeachment, however unlikely that would be at the outset of his presidency.

At the end of the day, though, this is small stuff. It’s just money, and he has plenty. He won’t actually need much in the next four years since he’s now covered by the taxpayers. Get it over with, immediately.

It’s not a bad day to be a Trump U. plaintiff, though.

Interested in more national news? We've got you covered! See More National News
Previous Article The Battlefield, November 11, 2016 – Is This The Hard Left’s Death-Rattle?
Next Article Are The Democrats Really Going To Make CAIR And Louis Farrakhan’s Favorite Congressman The DNC Chair?