Donald Trump is your president-elect, and if you take the events of the past 36 hours at face value you’d conclude everything is coming apart in America.

This was Portland, Oregon last night…

The anarchy on the streets in what looks like practically every Democrat-run major city in America would sure make it seem that we’re in for a rough ride in this country. It looks like 1968 or even 1860.

Thing is, it’s not. From my American Spectator column this morning…

That’s a pattern that has repeated itself across the country — in deep blue cities, the local pols demand Trump “reconcile” with the people he offended amid the campaign, and shortly after the Social Justice mob appears to bring chaos to the streets and Astroturf their way onto the local and national news to create the appearance of civil disorder. The pattern even includes perpetrating hoaxes to slander Trump supporters as violent racists.

And that disorder is clearly aimed at cowing Trump into “reconciliation” — as defined by those he is to reconcile with.

We know it’s Astroturf, not just because these protests and near-riots always are. The protesters in Austin came off buses, as they did in other cities.

It’s all the Left has in their arsenal. The election is over and the voters repudiated them nearly everywhere they could. It wasn’t just Hillary Clinton’s loss — the Democrats couldn’t take the House or Senate, they now control only 16 governorships and 12 state legislatures. Their party is at a low point of political power such as they’ve not seen since 1928, the finale of the Calvin Coolidge administration.

Democrats no longer have the power to win real arguments in America, because they’ve allowed a cadre of totalitarians and crybullies to seize control of their intellectual centers. All they have left is intimidation, and thus we now have a brand-new manifestation of the Occupy gang angry at Trump’s election and transported to TV-friendly locales for street theater. On the Occupy Wall Street Facebook page, they’re threatening a general strike during the Trump inauguration; this would be a considerably more frightening prospect if any of them had jobs.

It’s a prestige, from the old French definition of the word. It’s an illusion from a parlor trick. It isn’t real. And neither Trump nor any other Republican should give it credit.

They’re trying to Astroturf their way into intimidating the new Trump administration into dropping its plans for real reform in America, and to keep Republican voters and the conservative movement in the same malaise it’s spent most of the past eight years in.

Also from the column…

Here’s what’s important to remember — Republican perceptions of politics, and Democrat perceptions as well, are colored by the fact that since 1988 the only Republicans in the White House have been Bushes. And in the case of both father and son, hardball negotiation with Democrats simply wasn’t on the menu where domestic policy is concerned.

Trump is most certainly not a Bush, but this post-election ruse is a gamble that because he’s new to elected office and his political background is as a moderate New York Democrat he’ll cave like one with a little bit of pressure. He has an opportunity to disabuse the Dems of that notion by sticking to his guns on the agenda he outlined in his October Gettysburg speech, or at least most of it, and by nominating the most aggressive choice possible for the open Supreme Court vacancy.

Trump is President-Elect of the United States of America. He is going to have immense power to change the direction of public policy in this country. And these clowns are milling around outside of his home at Trump Tower making demands and spewing obscenities.

All he has to do is present them with the same kinds of cultural and political aggressions conservatives have endured over the past eight years from Barack Obama as a response to their bad behavior, and before very long the Left will begin to understand that the Age of Alinsky is over.

And good riddance to that bad baggage.

I actually did two American Spectator columns this week. Wednesday night’s was a piece on America’s Gag Reflex, and how Hillary Clinton was just too much for the Democrats to ask of the American people…

Hillary Clinton lost this race more than Trump won it. Which is not a disparagement of Trump’s upset; if nothing else, his late surge came from an excellent display of political discipline in largely refraining from any controversial words or deeds once Clinton’s legal troubles began multiplying 10 days out from Election Day — that restraint allowed her to lose the race and made him President of the United States.

Because what happened on Election Night was that the national gag reflex manifested itself. And the Democrats’ attempts at forcing down a charmless Alinskyite grifter under multiple FBI investigations ran afoul of that reflex. She found herself the victim of a massive laryngeal spasm on the part of the electorate.

So did the Democratic Party, which found itself winning only six House seats and a net of just two Senate seats when it crowed lustily over the possibility of capturing both houses outright. Democrats will have only 16 governorships in January, and control only 12 state legislatures. On Election Night as the smoke cleared it became obvious that America is sick and tired of the party in the White House.

And why shouldn’t it be? Nominating Clinton was an exercise in arrogance and corruption never before seen in American politics. It was a political aggression well in line with a long string of other affronts both political and cultural; for example, a sitting president encouraging illegal aliens to vote, attempts to install transvestites in girls’ bathrooms in American schools, efforts to punish religious people who don’t want to participate in gay weddings, Black Lives Matter, Lena Dunham, the IRS scandal, Bob Creamer, the Obamacare premium spike, Colin Kaepernick.

Americans have been lectured, scolded, robbed, demoralized, and gaslighted relentlessly for the past eight years. And to top it all, the Democrats demanded that if they wouldn’t swallow a “feminist icon” whose only employment came courtesy of her professional relationship with her husband, who we are meant to believe put the nation’s state secrets forfeit to foreign powers as an innocent mistake and who is obviously guilty of running a pay-for-play influence-peddling scam disguised as a charity alongside what is advertised as “public service,” then that would constitute sexism. Internet memes circulated by Democrats demanded that Clinton be elected in order to rectify the wrong of no previous female presidents, and her victory party featured a giant “glass ceiling” that she would figuratively shatter once elected.

Sorry, said the country, but too far is too far. If that means making the guy from The Apprentice president, so be it. America emitted an unpleasant noise, expectorated, and delivered the Democrats to the floor covered in sputum.

Something to watch for: by the third quarter of next year, don’t be surprised if the long-forgotten feeling of four percent economic growth makes a comeback in America.

That’s no particular endorsement of Trump’s economic policies, though he might do quite well in that regard. It’s a prediction based on the coming absence of a presidential administration which is actively hostile to new business formation.

The regulatory burden the Obama administration has imposed on business has been crushing. So much so that the number of businesses extant in America has been smaller each and every year, year over year, since Barack Obama was elected. That doesn’t just happen by accident, particularly in a technological environment wherein it should be easier and cheaper to start a new business now than ever before and amid the millennial generation which generally possesses the traits one would expect to produce large numbers of entrepreneurs.

But interestingly enough, despite all the fearful predictions of economic collapse the stock market where all those big businesses are bought and sold has been rallying since the election. Even Wall Street knows that clearing away that regulatory underbrush and allowing space for a more dynamic economy will produce better growth – even if that means new competitors shellacking the incumbents.

There is an enormous amount of pent-up entrepreneurship, economic demand and great ideas in this country. They’ve been locked away for a decade. None of them depend on Trump’s leadership to blossom; all he has to do is get out of the way, something today’s Democrat Party has shown itself completely incapable of doing.

Nowhere near enough fun is being made of Hillary Clinton, an entirely loathsome and ridiculous figure whose defeat must go down as the most ignominious and amusing rejection by the American people in our national history.

And when I mentioned this on Facebook, I was delivered this gem… 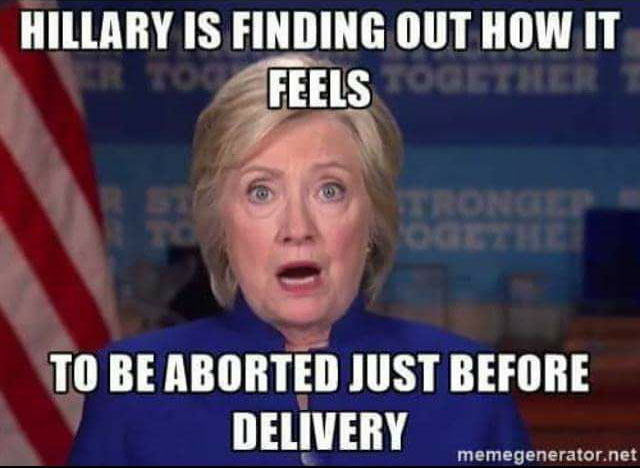 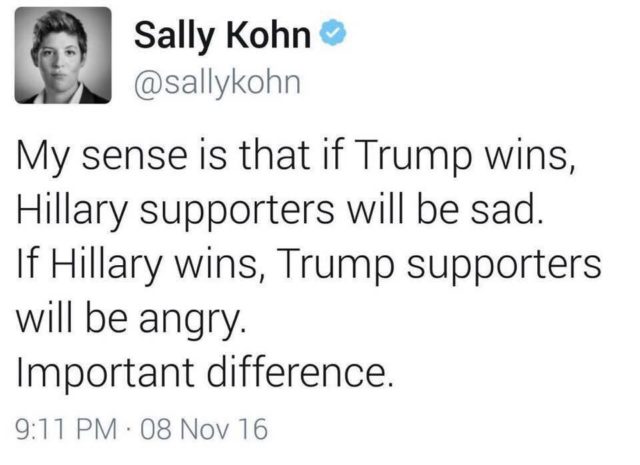