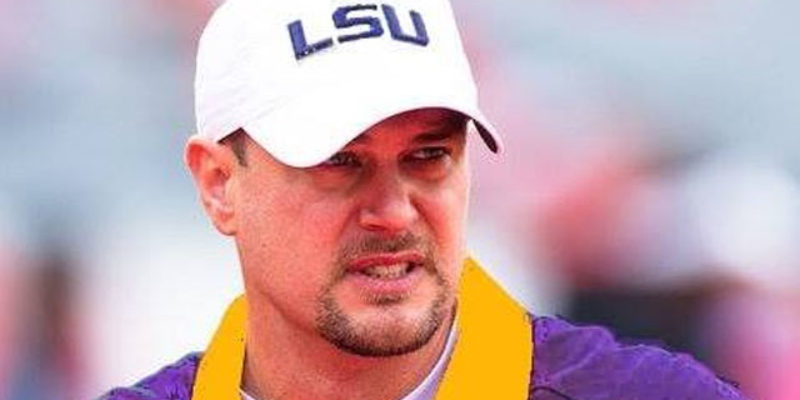 There is a rumor going around to the effect that a week from tomorrow (Nov. 28), LSU will have a press conference to announce its new head football coach.

After Saturday’s ugly loss to a Florida team the Tigers dominated in every statistical category and was clearly superior to in personnel, the odds are less than good that announcement will be the elevation of interim head coach Ed Orgeron to status as the permanent leader of the LSU program.

Which means the odds are overwhelming that one of three possibilities will be true on Monday the 28th of November, if that is in fact the deadline for hiring a new football coach.

The one which has appeared most likely has been that LSU will make an all-out effort to hire Florida State head coach Jimbo Fisher, who has been the rumored favorite for the job since Les Miles was fired at the end of September, and that effort will result in Fisher taking the job.

The monetary figures involved in landing Fisher will be staggering, and put his compensation on par with what Nick Saban makes at Alabama and Urban Meyer makes at Ohio State, and almost what Jim Harbaugh makes at Michigan. Fisher would, as LSU’s coach, be in the top three or four highest-paid coaches in America, with a package of compensation that could reach $50 million over seven years.

Fisher’s agent Jimmy Sexton is known as driving one of the hardest bargains in the business, and Sexton already has his client sitting on a contract worth $44 million if Fisher coaches at Florida State through 2022. It would cost LSU $5 million to buy Fisher out of that contract, plus another $2 million or so to buy out his assistant coaches depending on how many of them would come with him to LSU.

That money is not prohibitive; LSU has it to spend. That’s particularly true in current circumstances, given that the university’s wealthiest athletic boosters are desperate to secure a coach who can put the program back at an elite level and are willing to pay what it takes to do so.

That said, there is a point at which the demands made on the program by Fisher and Sexton could simply be more than are bearable. Which is why this probably shouldn’t be dismissed out of hand…

LSU officials expected to make former offer to Tom Herman's representative within next 24-48 hours according to sources in Baton Rouge.

That’s Scott McKinney’s Twitter feed. McKinney, as our readers who know SEC football are aware, has been covering SEC sports on the radio for quite some time. Whether he has reliable sources on this or not, we can’t say.

But there are those who will not be surprised at the idea LSU would first offer the job to Herman this year. Since early October there has been talk of a “gentleman’s agreement” between LSU and Herman, wherein the Houston head coach would be coming to TigerTown when the 2016 regular season was over.

But when it became increasingly clear that Texas would also be hiring a coach this year, a possibility which became a certainty when current Longhorn coach Charlie Strong found a way to lose to hapless Kansas on Saturday, the Herman-to-LSU talk died down and the conventional wisdom began to take hold that Herman would be more likely headed to Austin than Baton Rouge.

The idea of a bidding war with Texas is not an appetizing one to LSU. On the other hand, a bidding war with Jimmy Sexton for Fisher is likely to produce the same result – LSU will be paying Saban or Meyer money for its next head football coach if it ends up with either Herman or Fisher.

Of course the third possibility is LSU will hire neither Herman nor Fisher. This doesn’t appear likely; athletic director Joe Alleva cannot allow both to escape his grasp in this hire.

Still, in the next seven days lots can go wrong. McKinney’s sources might be correct, and an offer might well be made to Herman as a means of leveraging Sexton in the negotiations for Fisher. If Herman wants the LSU job more than the Texas job, or if he isn’t satisfied with what he’s hearing from the folks in Austin, then an offer of, say, $5 million per year – which essentially doubles his current salary at Houston – might just make him the next LSU coach.

Or if there is enough interest with Herman to open serious discussions, it could be that Sexton and Fisher become motivated to accept whatever offer is on the table from LSU. Alleva may be trying to put himself in a position to have leverage on both Herman and Fisher. It’s probably the only way to close the sale on one of the top two choices available without breaking the bank on a $50 million contract.

But the risk of swinging and missing at both Fisher and Herman is there, and with the ugly loss to Florida it no longer seems likely that Orgeron can serve as a good fallback. Who sits atop LSU’s “B-list” to serve as a third option?

North Carolina’s Larry Fedora has been mentioned as one possibility. Virginia Tech’s Justin Fuente could be another.

Fuente is an interesting possibility. He’s currently sitting at 8-3 overall, with a 5-2 record in the ACC and the potential to win the Coastal Division title if he can close the season on Saturday with a win at home over 2-9 Virginia. Fuente is in his first year at Virginia Tech, having come over from Memphis, where he took a program which had gone 5-31 in the three years prior to his arrival to records of 4-8, 3-9, 10-3 and 9-3, including a pair of bowl bids. Fuente is known also for having made quarterback Paxton Lynch a first-round draft pick.

And like Fisher and Herman, Fuente is an offensive coach. Before landing the head coaching job at Memphis he was the quarterbacks coach and co-offensive coordinator at TCU from 2008-10; while there he developed Andy Dalton into a first-round draft pick. In the three years Fuente had the reins of TCU’s offense the Horned Frogs were 11-2, 12-1 and 13-0, with Mountain West Conference championships the last two years and a Rose Bowl victory in 2010. The offensive fireworks he generated were equally impressive; 33.6 points and 421.3 yards per game in 2008, 38.3 and 455.5 in 2009 and 41.6 and 476.2 in 2010.

This year, taking over a team that was 7-6 in Frank Beamer’s final year last year, he’s made major improvement, particularly offensively – Virginia Tech has gone from 385.1 yards of offense per game to 441.5, with an improvement in scoring offense from 31 points per game to 33.5.

Fuente gets immediate results and he’d very well thought of in the coaching profession. He’s extremely articulate and likable, and his current salary is $3.2 million. To buy him out of his contract would cost LSU $7 million, a figure which drops to $6 million after Dec. 15.

In any event, LSU fan ought to be rooting for Miles to land a job he’s considered for, like for example the Baylor job. Some of the money to pay a buyout for a new coach could come from Miles signing on with another program; it’s assumed any deal that would lure Miles would be worth more than his $8 million buyout figure over the next six years, and that would zero out LSU’s obligation to him and free up resources to apply to the new coach, whoever he might be.

The guess here is the favorite for the job is still Fisher. But if McKinney’s sources are correct, Herman is also a factor. Beyond those two, it’s anyone’s guess – and it’s Alleva’s job on the line.

UPDATE: An added thought to throw in – last year Tom Herman was under serious consideration for the South Carolina job, and apparently was considering a job offer to move to Columbia.

But when South Carolina lost a late-season game to The Citadel, Herman decided the rebuilding project there was just too daunting for it to be worth leaving Houston.

Is Texas’ loss to Kansas similar to the Citadel loss for South Carolina last year? Obviously Texas is a more prestigious program and there is talent, at least in the skill positions, enough for a good coach to turn around what will be a 4-8 or 5-7 team this year and make the Longhorns bowl-eligible (which, interestingly enough, is what Will Muschamp has managed to do at South Carolina this year), but losing to Kansas is a sign UT is in a worse state than generally accepted. One wonders if perhaps Herman might have reached a similar conclusion as last year, only this time thinking he had another option.

UPDATE #2: Add to this the rumor, which we’ve heard twice but cannot yet substantiate, that Herman was in Baton Rouge over the weekend. That doesn’t in itself mean anything – he’s recruiting a couple of players in Baton Rouge, plus there were a number of high school playoff games in Baton Rouge on Friday involving college-bound recruits. But the “Hire Herman!” crowd has definitely jumped on that nugget of information to get really excited.