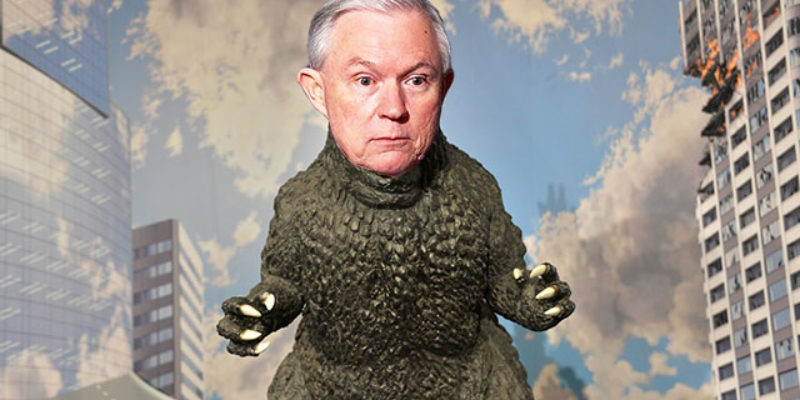 Oh, this will be glorious.

President-elect Donald J. Trump has selected Senator Jeff Sessions, a conservative from Alabama who became a close adviser after endorsing him early in his campaign, to be the attorney general of the United States, according to officials close to the transition.

Sessions isn’t the best candidate Trump could choose as AG. Rudy Giuliani and Trey Gowdy, whose names had been thrown out often during the transition process, would have made more sense. But Sessions was a close adviser to Trump from the very beginning of his campaign and largely wrote Trump’s immigration policy among other things, and it’s perfectly unsurprising he would get an appointment so close to the center of Trump’s orbit. There is also no question whatsoever that Sessions is qualified for the job. He was the US Attorney for the Southern District of Alabama and later Attorney General in Alabama, before being elected to the US Senate in that state repeatedly by large margins. He’s served on the Senate Judiciary Committee for a long time and chairs the Subcommittee on Immigration and the National Interest.

There is no doubt he’s qualified. But mostly because he’s a white conservative from Alabama Sessions will be Borked by the Left as a racist when his nomination is forwarded to the Senate; after all, that’s what they did to him in 1986 when Ronald Reagan tried to make him a federal judge when he was a US Attorney.

While Mr. Sessions is well liked in the Senate, his record as United States attorney in Alabama in the 1980s is very likely to become an issue for Democrats and civil rights groups expected to give it close scrutiny.

While serving as a United States prosecutor in Alabama, Mr. Sessions was nominated in 1986 by President Ronald Reagan for a federal judgeship. But his nomination was rejected by the Republican-controlled Senate Judiciary Committee because of racially charged comments and actions. At that time, he was one of two judicial nominees whose selections were halted by the panel in nearly 50 years.

It turns out that Thomas H. Figures would later, as a lawyer in private practice, get himself indicted for paying a $50,000 bribe to a drug kingpin in exchange for exculpatory testimony on behalf of a client on trial for crack distribution. That was considered “retaliation” for having participated in the Borking of Sessions. Figures also spent some time in jail for contempt of court in his divorce case.

So that’s where the credibility of the 30-year old raaaaaacism charge comes from. You’ll hear it over and over again as the Democrats try to make Sessions too radioactive to confirm.

And what’s really behind those objections is this…

The Clinton Foundation ought to be “fully investigated” amid a new publicly released batch of emails from Hillary Clinton’s private server that showed the foundation was used to provide foreign nationals access to Clinton, U.S. Sen. Jeff Sessions, R-Ala., said Tuesday.

“The fundamental thing is you cannot be secretary of state of the United States of America and use that position to extort or to seek contributions to your private foundation,” Sessions said during an appearance on CNN. “That is a fundamental violation of law and that does appear to have happened.”

“When people think that the way you gain entrée is to give to this foundation, why are these people giving money to the found? Why are these people in countries that are very poor giving millions of dollars, even” hundreds of millions of dollars to a foundation that doesn’t benefit them in any direct way or the people in their country,” the senator said. “So they’re doing it to gain access, and you [shouldn’t] pay to get access.

Sessions said he couldn’t say whether FBI Director James Comey was thorough in his investigation of Clinton’s private email server, which resulted in no criminal charges against Clinton or anyone else, but he said “it seems like he has not.”

“The evidence indicates to me that this should be fully investigated,” he said. “There is a cloud over this, and just because he might conclude that there is not a chargeable offense does not indicate there is no wrongdoing. This is not healthy. You do not use the secretary of state position to benefit your private foundation.”

Sessions has been pretty outspoken in his criticism of the haphazard way the Clinton scandals have been pushed by Obama’s Justice Department, and it’s pretty obvious as Attorney General he’ll aggressively root out the left-wing activists in DOJ. He’s going to be the Left’s worst nightmare as an attorney general imaginable, save for perhaps the prospect of Ted Cruz getting the job. You will see a much more robust investigation of Washington corruption, to include the Democrat Party, with him as the Attorney General – and that’s why they will do everything they can to stop him from getting the job.

Let’s hope the Republicans in the Senate don’t stab him in the back and scuttle his nomination like they did back in 1986.

UPDATE: It’s already begun. We’d never even heard of these people, but here they come out of the woodwork…

“We are deeply disturbed, but not at all surprised, by Donald Trump’s choice of Senator Jeff Sessions, a racist, misogynistic and bigoted man to serve as the nation’s chief law enforcement officer.

“Sessions’ record on protecting women is abysmal, from voting against cracking down on military sexual assault to opposing the Violence Against Women Act.

“Thirty years ago, the Senate said Jeff Sessions was too racist to be a federal judge, and 30 days ago, Senator Sessions didn’t think that grabbing a woman by her genitals without her consent was sexual assault.  It is now up to Senate Republicans and Democrats to ensure that our nation’s standards aren’t lower today than they were 30 years ago and prove that they are committed to moving us forward, not backwards.”

In October, more than 32,000 people signed onto a new petition from UltraViolet Action calling for the removal of Senator Jeff Sessions (R-AL) from the Senate Judiciary Committee after Sessions refused to acknowledge that Trump’s comments in the 20016 hot mic Access Hollywood Video – in which Trump described forcibly kissing women and grabbing their genitals – constituted sexual assault, tellingThe Weekly Standard after Sunday night’s debate, “I don’t characterize that as sexual assault. I think that’s a stretch.”

We would have thought it would be raaaaaaaacism. Instead he’s a male chauvinist pig.

It doesn’t really make much of a difference.

The charge is idiotic. None of these partisan Democrats had a single word of criticism over anything Bill Clinton did; now Jeff Sessions is unacceptable as Attorney General because he sought to minimize political dirt on a candidate he was supporting? Please.

But this is what we’re going to get.