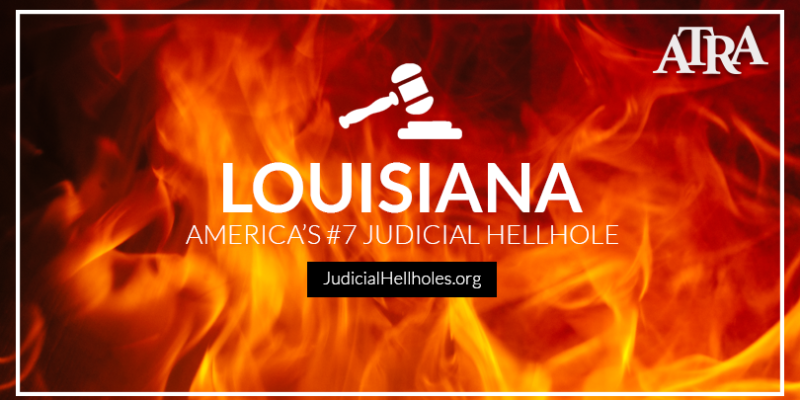 According to a new report, the Pelican State is the nation’s seventh-worst “judicial hellhole.” In explaining the ranking, the report cited ongoing challenges and abuses of the state’s civil justice system—from lax laws that allow venue shopping to a plethora of plaintiff-friendly judges and justices elected by the trial bar with out-sized influence.

Featured most prominently in the report, however, is Gov. Edwards’ ongoing effort to hire his top political supporters to oversee litigation targeting the oil and gas industry for billions of dollars to restore the state’s eroding coast.

“The governor has unilaterally and, according to some critics, unlawfully sought to hire some of the state’s wealthiest plaintiffs’ lawyers to run the energy industry-targeting litigation,” the report noted. “That these same private-sector lawyers also contributed generously to the governor’s campaign smells of the same pay-to-play cronyism that brought down the state’s previous attorney general.”

The report cited local news coverage of a cozy arrangement quietly authorized by the Edwards administration to enroll Taylor Townsend, a trial attorney and former lawmaker, as lead counsel in the state’s case.

Townsend served as co-chair of Edwards’ transition team and currently serves as chair of the governor’s fundraising super PAC. In his small-town private law practice, Townsend specializes in criminal defense and personal injury cases, not complex environmental litigation. Townsend and the team of attorneys subcontracted under him to represent the state collectively contributed $130,000 to Edwards’ campaign and transition team last year.

What’s more, Gov. Edwards’ propensity for hiring his friends and supporters in state legal matters is not limited to the high-profile coastal litigation.

Local media has reported that Townsend was awarded a separate $75,000 legal contract to represent the Louisiana State Police Commission and investigate possible improper campaign donations to Gov. Edwards and other politicians. Similarly, the wife of Jefferson Parish Sheriff Newell Normand, who played a significant role in Edwards’ gubernatorial election, was awarded a lucrative no-bid contract to do legal work for the Louisiana Stadium and Exposition District.

In addition, numerous elected officials including Attorney General Jeff Landry and a coalition of state lawmakers led by Rep. Stuart Bishop (R-Lafayette), have openly questioned Gov. Edwards’ attempt to skirt state laws that preclude him from hiring private outside counsel on a contingency fee basis.

The law requires private lawyers working on behalf of the state to be paid reasonable hourly rates. But under the administration’s proposed legal contracts, the governor’s cronies could potentially reap billions in legal fees from state litigation.

Without question, this “good ol’ boy” approach to state litigation undermines public trust in our legal system and contributes to the nagging reputation that Louisiana is a judicial hellhole. Like it or not, that’s the perception and perceptions matter—especially when we’re competing on a national and global stage for jobs and investments that we desperately need.