Here’s a press release, with some commentary from us on the other side…

BATON ROUGE, LA – A district court has declared that Governor John Bel Edwards unconstitutionally side-stepped the Legislature and created law, ruling that Executive Order No. JBE 16-11 is unconstitutional and cannot be enforced.

19th Judicial District Court Judge Todd Hernandez today affirmed the constitutional independence of the Attorney General’s office and noted that a Governor cannot act outside the scope of his authority by creating law with the stroke of his pen.

“I applaud Judge Hernandez for basing his ruling on the law, not politics,” said General Landry. “My challenge has always been about upholding the checks and balances on executive authority as established in our State Constitution.”

“In the last eight years, outgoing President Barack Obama has used a phone and a pen to advance an unpopular agenda that he could not get Congress to support,” continued General Landry. “Repeatedly, courts have struck down his actions noting the President cannot simply sidestep the people’s elected Representatives in Congress. Now, John Bel Edwards is using the same Washington-style politics and games here in Louisiana.”

“After efforts to advance his extreme agenda failed by large bipartisan majorities in the Legislature, John Bel Edwards took it upon himself to replace the people’s will with his own. Fortunately for the families and businesses in our State, the court ruled today that the Governor’s executive fiat will not fly in Louisiana,” added General Landry. “We do not live under a King in Louisiana; we have a Governor, an independent Attorney General, an elected Legislature, and a Court system who are all involved in governance along with others. Governor Edwards must live within the Constitution.”

“I am pleased that the Court has enjoined the enforcement of John Bel’s executive order,” concluded General Landry. “My office and I will continue to stand up for our Constitution and the democratic process.”

Attorney General Jeff Landry has legal right and discretion to approve outside attorneys appointed to represent the State of Louisiana. General Landry has the constitutional right to intervene in any case after approval of counsel: “It is this court’s finding that the specific legislative authority promulgated in La. R.S. 42:262 and La. R.S. 49:258 provides that the office of the attorney general is vested with the authority to use his/her discretion in approving contracts for private legal counsel to state agencies, boards and/or commissions.”

The long and short of this was that Edwards attempted to make state law by signing an executive order banning discrimination based on sexual orientation in employment of all state contractors. Whatever you might think about such discrimination, such a policy would have to be made by the state legislature and it hasn’t done so – in fact, the legislature has expressly refused to do so despite several bills having been brought forth to install the policy Edwards wanted to force on state contractors by fiat.

Landry objected to the executive order and refused to sign off on a number of contracts which included that language. For his having done so he’s been branded a homophobe by Edwards and the entirety of the state’s Democrat establishment, but that’s merely a smokescreen – Landry’s opinion of gay people is not relevant to the discussion; his opinion of who gets to make state law is what’s relevant, and now we’ve got yet another a judge who agrees with him over Edwards.

What’s interesting here is with each judicial victory Landry is expanding, in a de facto sense, the power of his office at the expense of what’s always been seen as an imperial governor. One of the key parts of this ruling is that the Attorney General has the discretion to step in and kill any state contract for legal work for any reason of his choosing – illegality, he doesn’t agree with the policy, he doesn’t like the lawyers being hired, whatever. That power has always been there – at least, so believes Judge Todd Hernandez – but nobody has ever acted on it.

This is a big deal as it affects Edwards’ most prominent legal scheme – namely, the hiring of a private cabal of plaintiff attorneys headed by his PAC chairman Taylor Townsend to chase down and sue oil companies the governor alleges are responsible for the deterioration of Louisiana’s coastline. Landry has the ability, it seems, to kill the contracts with those attorneys based on this ruling.

For those of you interested, here is Hernandez’ six-page judicial memo… 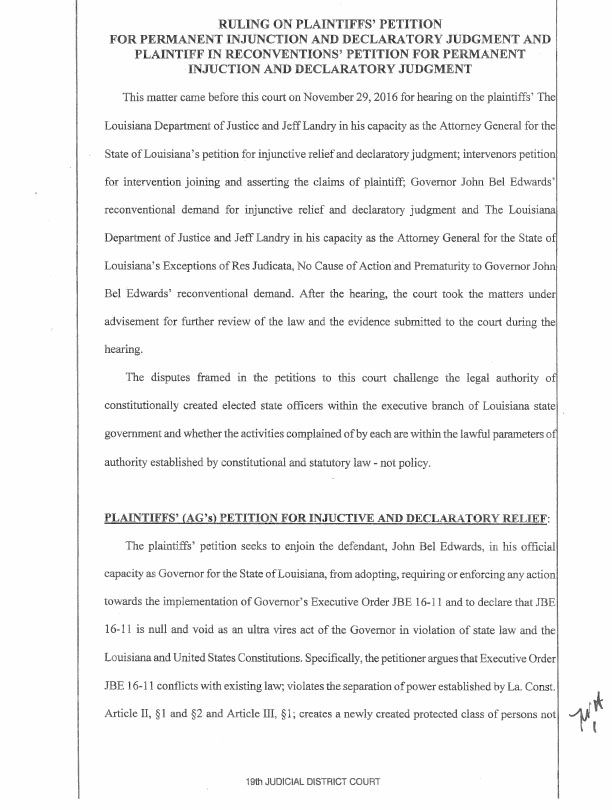 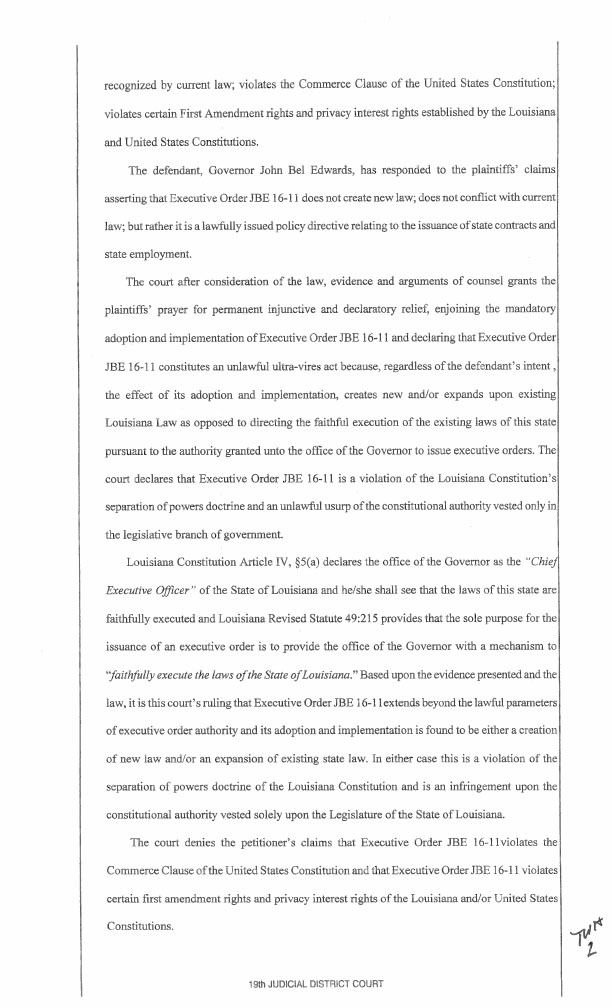 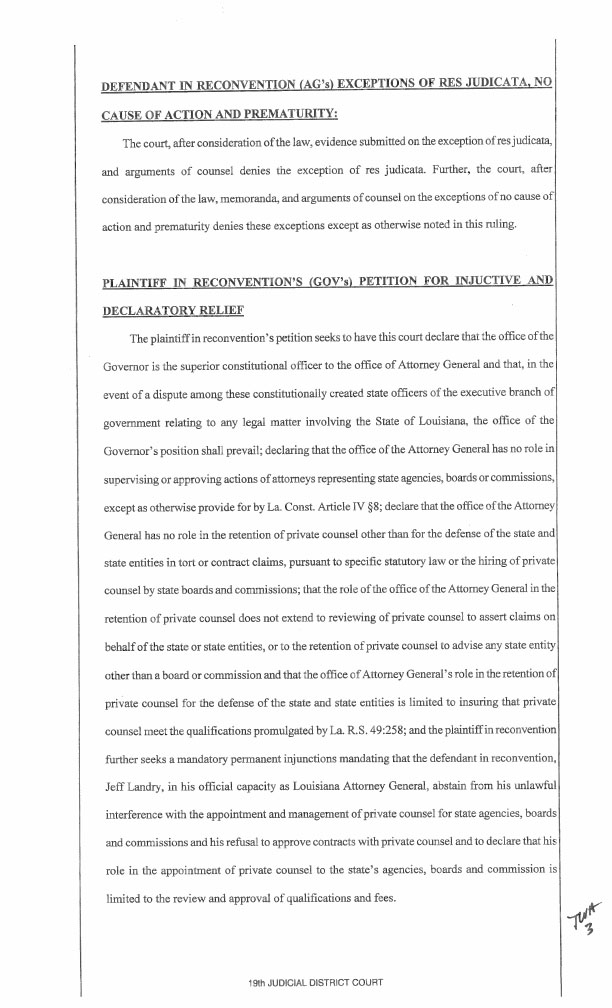 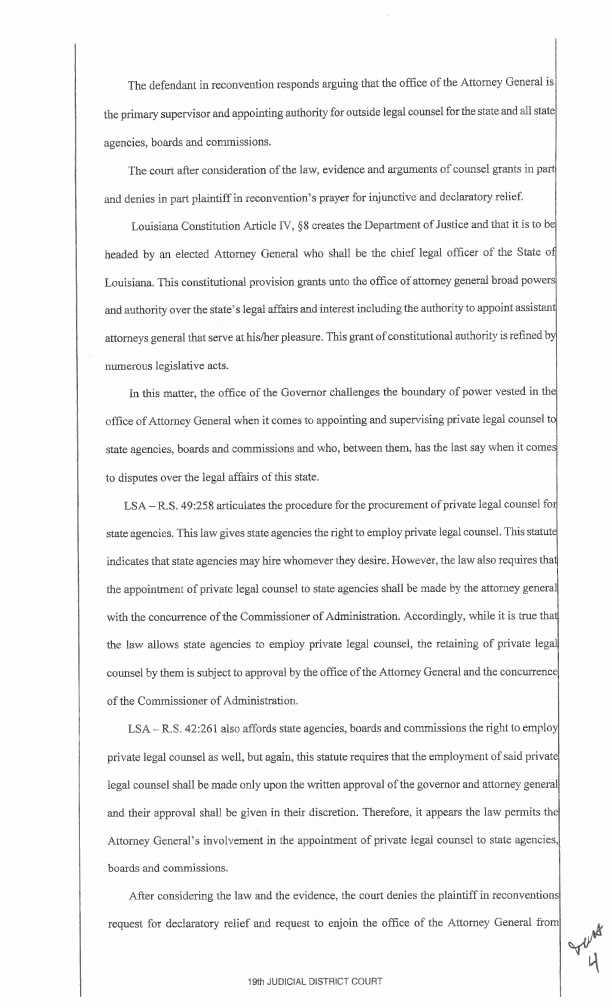 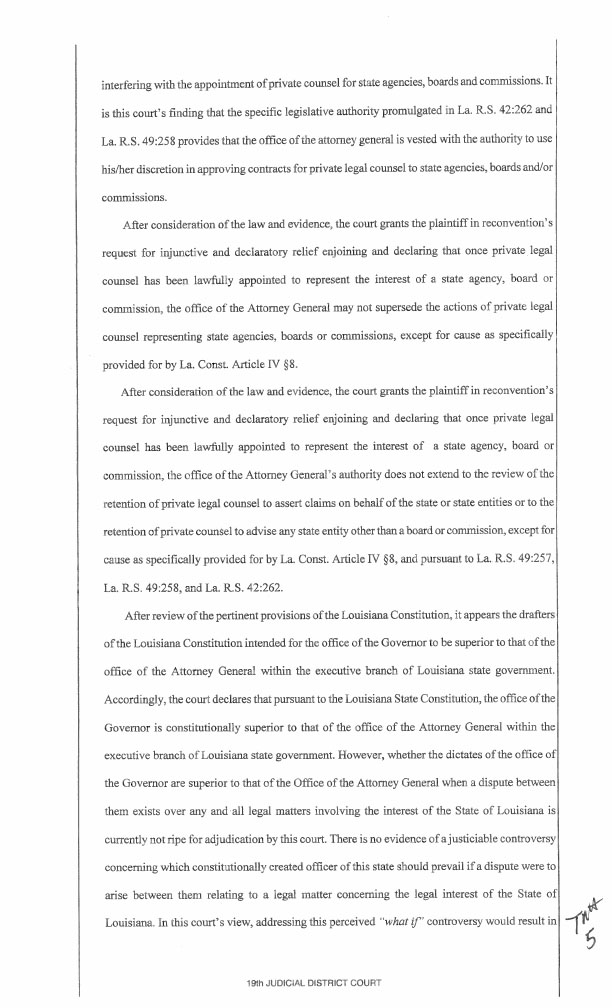 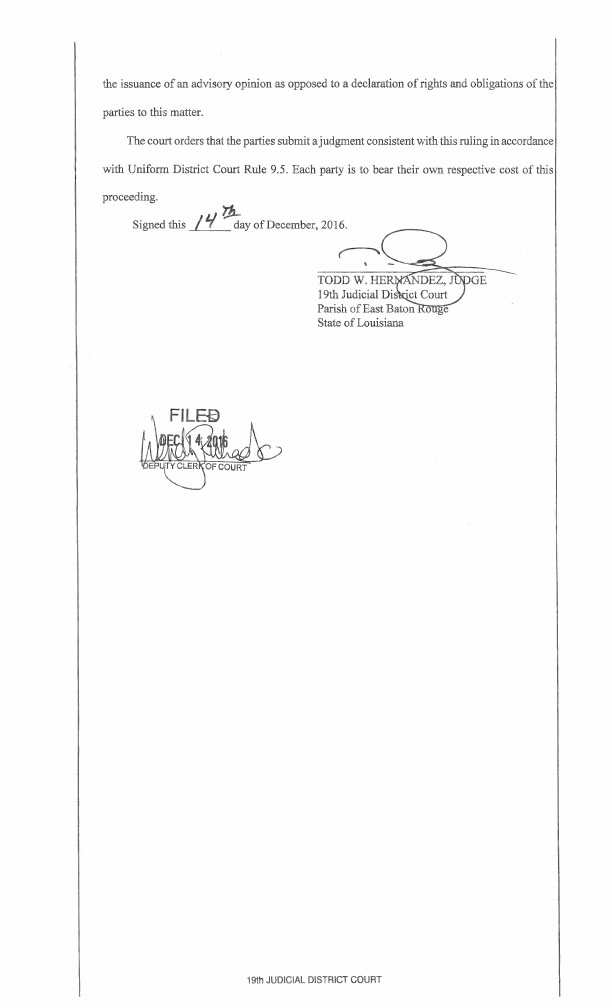