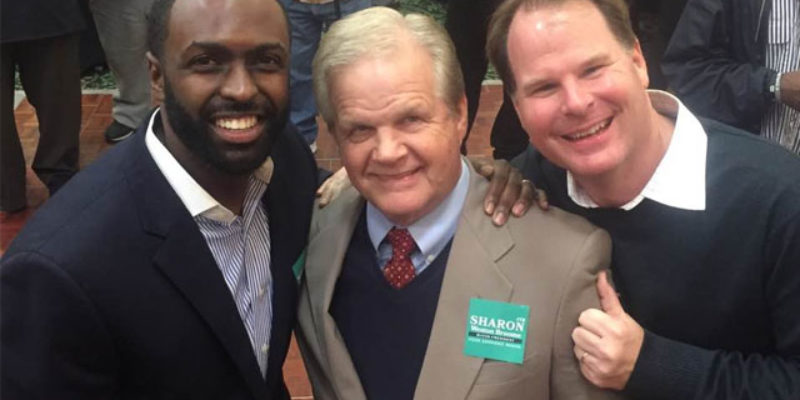 That appears to be the inescapable conclusion from watching media coverage this week.

First, let’s explain the analogy. If you talk to a random sampling of African Americans, you will find a large number who will express irritation that the mainstream media seeks out the Jesse Jacksons, Al Sharptons and Deray McKessons of the world to act as spokesmen for Black America. The sentiment will be that nobody voted for these hustlers to represent them and that they’re mere opportunists and little more – and while it isn’t particularly beneficial for the Jacksons of the world to be out fomenting racial discord, they are who they are and there’s no stopping them from doing what they do. The blame, this line of thinking goes, falls on the media in foisting them onto the black community as its spokesmen.

Which is probably correct, and something that white people who cringe every time a Sharpton or Jackson gets busy making trouble should keep in mind. It isn’t black people who fund Jesse Jackson or Black Lives Matter, after all; it’s white leftists who do that.

Jenkins fits into the analogy nicely, because it seems he’s being put forth as the spokesman for everything white in Baton Rouge, and now that Sharon Weston Broome is the mayor-elect he’s been the go-to guy for commentary from the white side of town.

For example, in an Advocate article about how the city probably now ought to be called Baton Bleu rather than Baton Rouge, there is this…

Republican Woody Jenkins recalled Tuesday when the parish used to be a “conservative bastion.” East Baton Rouge voted for Republican U.S. Presidential candidates consistently from 1972 to 1992. Ronald Reagan and George H.W. Bush both won with higher margins of victory in East Baton Rouge Parish than they garnered statewide.

East Baton Rouge Parish re-elected Bush with 54 percent of the vote, but Bush won statewide with 57 percent of the vote. On that same ballot, Mayor-President Kip Holden, a Democrat, won his first term in office in 2004, defeating Republican incumbent Bobby Simpson 54 to 46 percent.

And that followed a piece with a headline quoting Jenkins as saying there’s a 99 percent certainty St. George will happen at a luncheon he put on yesterday…

“I feel 99 percent sure it’s going to happen,” Jenkins said about the creation of St. George. Jenkins was an avid supporter of the creation of the city the first time, which he and other proponents saw as a vehicle for high-performing neighborhood schools and less crime.

There are people far more qualified than Jenkins to speak about St. George. Metro Councilman Chandler Loupe was quoted in the Advocate as calling it a “really real reality” after Broome’s election, and Norman Browning – the actual chair of the St. George incorporation effort last year – has made statements to the effect it’s coming back.

And yet the headline is Woody Jenkins’ statement.

That prompted this shot across the bow from the St. George organizers’ Facebook page…

Translation: “Woody Jenkins does not speak for us.”

And this is an issue the St. George crowd is fairly torqued up about, because last year there was a great deal of rhetoric put out by opponents of St. George that the whole thing was a ploy by Jenkins to gain political power in East Baton Rouge. The five men who made up the committee in charge of the St. George volunteer effort really chafed at that, because while on the whole nobody wanted to have publicly unfriendly relations with Jenkins they absolutely did not take orders from him and were absolutely not interested in having him speak for them.

And when Jenkins put up a Facebook page by the name of the St. George Leader, which most took to be a prelude to starting up a little newspaper like the one he runs in Central, the members of that committee were even more irritated. One of them told me the impression that created made life a great deal more difficult for their efforts; they’d ask people to sign the petition and be told no, because Jenkins’ “involvement” made the idea a non-starter. 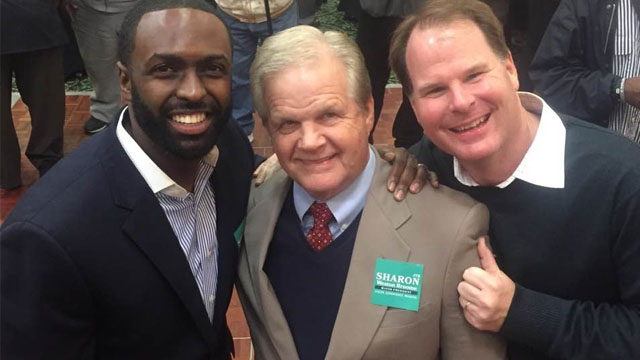 That’s Jenkins in the middle, with Democrat state representative Ted James on the left and Democrat political consultant Michael Beychok on the right.

When Beychok’s partner in crime Trey Ourso posted the pic to Facebook, Jenkins posted this comment by way of explanation… 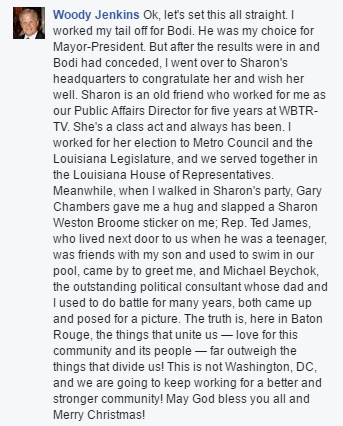 The picture has been shared all over the place and Jenkins has gotten hammered over it.

The point here is not to bash Jenkins. He is who he is, and he’s going to do what he’s going to do. If and when the St. George movement cranks back up next year he’s going to try to trade off it by publishing a newspaper and selling ads in it. And it’s not like Jenkins is wholly illegitimate as a spokesman – he’s the chair of the Republican Parish Executive Committee in East Baton Rouge Parish, which means he can say he’s elected to speak for the GOP in Baton Rouge. Others would say the RPEC in EBR is a pathetic joke whose endorsement is more like a kiss of death than an actual benefit to a political candidate, and wouldn’t need to go any further than its endorsement of Buddy Caldwell in last year’s Attorney General race, or its endorsement of everybody but Garret Graves in the 6th District congressional race in 2014, to prove that charge. But Jenkins can hold himself out as a spokesman for things conservative in town.

Just not THE spokesman. And it seems that’s what the local media is attempting to make him – particularly as St. George 2.0 looms.

Interested in more news from Louisiana? We've got you covered! See More Louisiana News
Previous Article Boustany Drops “Murder In The Bayou” Lawsuit
Next Article JBE Wants To Raise The Gas Tax, But Kenny Havard Is Considering An Even Worse Idea