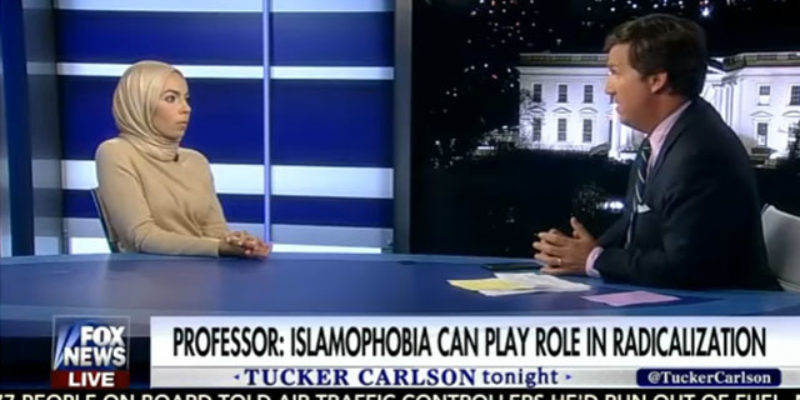 The professor’s name is Engy Abdelkader, and she teaches classes on international terrorism, human rights and civil liberties at Georgetown, and in the wake of the Ohio State terror attack Carlson has her on to discuss a column she wrote in Time Magazine several months before which made the claim that it’s the refusal to accept Muslims by Western countries which causes terrorism.

It’s a good segment, and well worth watching. But while Carlson wins this one he doesn’t go as far or wreak the havoc on his opponent’s argument as he usually does.

She claims, and not completely without merit, that many of the lone wolf jihadists who emerge to harvest infidels here in Dar al-Harb (in Muslim parlance, the Land Of War, or the part of the world not yet brought under Islam’s heel) become terrorists because of “cultural homelessness” – meaning that they no longer fit in back in their home countries, which universally suck, but don’t really belong in America, or Britain, or France, or wherever in the West they end up. Carlson isn’t impressed with that argument but he misses an opportunity to press the point from the other side – which is to ask whether that cultural homelessness isn’t a failure of the Muslim community in the United States, for example, to do its duty in fully assimilating people into this culture, and if that assimilation isn’t possible does that not augur poorly for the idea of any more immigration into this country from the Islamic world?

He also doesn’t go into the Koranic exhortation to kill infidels in the name of Allah if they refuse to convert or submit to Islam, which anyone who has studied radical Islam or jihadism knows is far more of a motivator for terrorism than “cultural homelessness.” And while he beats around the bush a little he doesn’t fully engage her on the absolutely offensive nature of her suggestion that it’s the West’s intolerance which causes terrorism – which is a contention quite suggestive of extortion, in that it implies a threat to continue victimizing peaceful Westerners who refuse to accept Muslims for fear of the spectacular violence some of them visit upon society.

That is an unresolvable contention, because no rational person would accept a religion they perceive as carrying with it that level of violence in the name of its god, and that lack of acceptance is, under Abdelkader’s formulation (whether she states it this way or not), provocative of more violence.

Thus, the terrorism never ends. And that’s why we live in the Dar al-Harb.

That might be a bit of a heavy discussion for a short cable news debate, but Carlson has the juice to handle it and we would have liked to see him take a crack at going that deep. He might have had time if he wasn’t busy dispelling her fraudulent allegation that white supremacists commit more terrorist acts than jihadists do (which would only be true if you equate spray-painting a swastika somewhere with setting off a pressure-cooker bomb at the finish line of the Boston Marathon).

Interested in more national news? We've got you covered! See More National News
Previous Article And Then There Is This Cretinous Loser
Next Article VIDEO: Ted Cruz On The Death Of Fidel Castro, And The Left’s Encomiums To Him