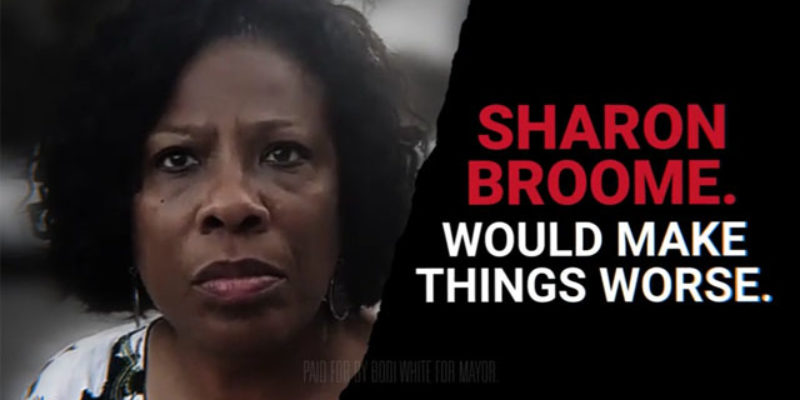 They’ve gone old-school in the Bodi White campaign, with a pair of ads reminiscent of 1970’s political TV spots hitting Broome on her record.

Short, sweet, to the point.

Here’s one on her economic record as a legislator…

Now one on crime…

White is in a bit of a conundrum as to how to mobilize the vote he needs to win. He needs to get something close to the same level of support from white voters that Broome is getting from black voters; there will be more whites voting than blacks when everything is counted Saturday night, but while Broome is likely to catch 95 percent of the black vote if not more, White is hoping to draw 85 percent or so of the white vote as his magic number.

And white voters are a lot more diverse in ideological affiliation than are black voters, certainly for the purposes of this race.

So what White has to do is produce messaging which reaches across the spectrum in order to mobilize those disparate elements. He has to insure that all of the conservative voters in East Baton Rouge Parish who are alive and kicking vote on Saturday, but that isn’t enough – he also has to get moderate and liberal white voters to come his way as well.

These ads give him a shot at doing that. Liberal or conservative, nobody wants to see businesses closing up shop or the economy doing badly – so pointing out that Broome’s LABI score is terrible by saying that she votes against small business 68 percent of the time is a way to make even crunchy soccer-mom types feel queasy about voting for her. They had no trouble voting for Kip Holden, largely because he was able to sell himself as an economic-development guy. Broome isn’t. Liberals tend to want to find that unicorn politician who can give them all the utopian policies they love while at the same time having a booming economy, and the economic ad has a good way of saying that’s not what Broome promises.

And the crime ad is what it is. Somehow, though, making crime an issue is a racist thing to do, so there might be pushback from some quarters. That said, the crunchy soccer-mom types are usually motivated by fear of criminals – the Clintons pulled that vote in the 1990’s by having a tough-on-crime stance, and George W. Bush pulled them with similar policies. Pointing out that Broome has a record of loosening sentencing for violent criminals is one way to signal that you’re going to get a more lawless city with her in charge – and given that lots of the more left-leaning white voters live in places like the Garden District, Spanish Town, Mid-City, Capital Heights and so on, which aren’t far away from some high-crime areas, this could resonate.

Nobody knows how this race will end up. One thing which is safe to say, though, is that White’s camp has run about as good a race as could be run in this cycle for this seat. If it isn’t enough on Saturday night, we’ll know that it’s simply no longer possible for a Republican to get elected mayor of Baton Rouge – and that Baton Rouge’s destiny is to become the next Jackson, Baltimore or Detroit.