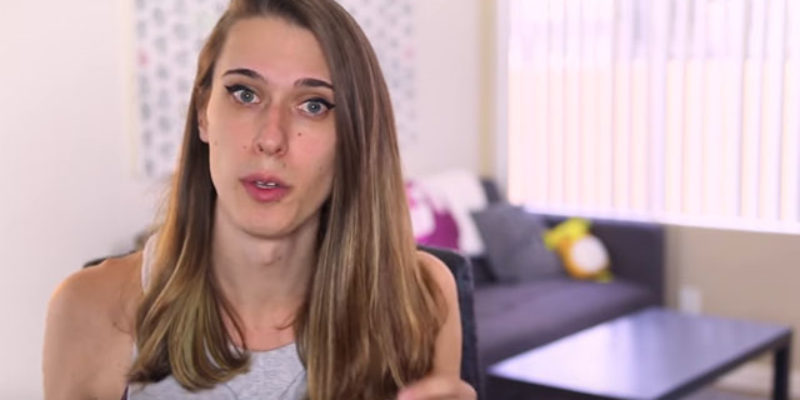 We subject you to this, knowing the long odds against your being able to last through the entire five minutes, because it is an excellent exposition of the complete nonsense the transgender movement is based on and the sense of snowflake entitlement pervading so many millennials it represents.

The video is of someone named Riley J. Dennis, whose biography describes him as a “non-binary trans woman, writer, YouTuber, activist, and educator,” pontificating not about the oppression people like him suffer in things like the job market – but complaining about the poor treatment given transvestites and transsexuals on the dating scene.

And the video largely proves it.

It is not a sane argument to first contend that homosexuals are born that way and cannot change who they are attracted to, and then to turn around and bark at heterosexuals that it is the media and the culture which have brainwashed them into believing they should only be attracted to the opposite sex, in the way the “media” has conditioned us not to be attracted to fat people.

It’s not an argument at all, truth be told. It’s a tantrum.

Interestingly, by the logic of the second part, the “pray away the gay” conversion therapy folks the gay community and the political Left go so ballistic about have won the argument – namely, that sexuality is a choice and if society enforces its preferences forcefully enough then homosexuality won’t be chosen.

And in fact, that is what the cultural Left is doing in the case of transgenders like the idiot in the video – they’re appropriating the language of the civil rights movement in order to demonize normals as “bigots” not for refusing to hire transgenders or denying them the public bathroom of their choice unless they can “pass” for the sex they’ve chosen for the day, but for something else much creepier.

What the crazy man in this video is saying, and he’s not alone within the nutjob Left in saying it, is that if you are a straight man or a straight woman and you are not sexually attracted to a transsexual, then you display a retrograde and unacceptable attitude and are guilty of “discrimination.” And since being a bigot is the worst social sin imaginable in this world the Left has crafted for us, browbeating these people into agreeing to date the sexually confused becomes possible.

Nowhere in this screed is it recognized that perhaps the most basic human right conceivable is that of who to love. The argument presented in this video denies you that – if you establish a preference for a mate with whom you may have children, you are guilty of bigotry for excluding those with whom it is impossible.

And let’s not get into the question about otherwise normal people who for whatever reason can’t have kids. We’re talking about calling a straight man a bigot because he refuses to date a shemale.

It goes without saying this is why Donald Trump won the election. Normals are simply finished entertaining this level of gobbledygook in polite conversation, and are now no longer willing to give it credit. And the Left, which has staked its cultural and political future on normalizing an ever-escalating carnival of freakery and moral decline (now with the transgenders, next with the pedophiles and practitioners of bestiality), is faced with an existential problem – what if they’ve overreached and the other side is not only no longer willing to engage in these “innovations” but is actually committed to ridiculing them and rolling them back, and is willing to engage in the same impolite and obnoxious tactics the Left has in order to accomplish its own ends?

In other words, what if the cultural Right is willing to be the very people the Left has calumnized them as for the last several decades?

That seems unlikely, but if the alternative is to sit by as the stupidity expressed in the video becomes mainstream thought it isn’t impossible. No rational human being should tolerate being forced to accept the idea that 2+2=5 as it affects his or her own personal life choices, and that is precisely what is being demanded.

To hell with these people. They are insane and they need counseling, not acceptance.

Interested in more national news? We've got you covered! See More National News
Previous Article The Battlefield, Dec. 2, 2016 – The Mad Dog Cometh
Next Article Either Newell Normand Or The NOLA Media Has Lied With Respect To The McKnight Case