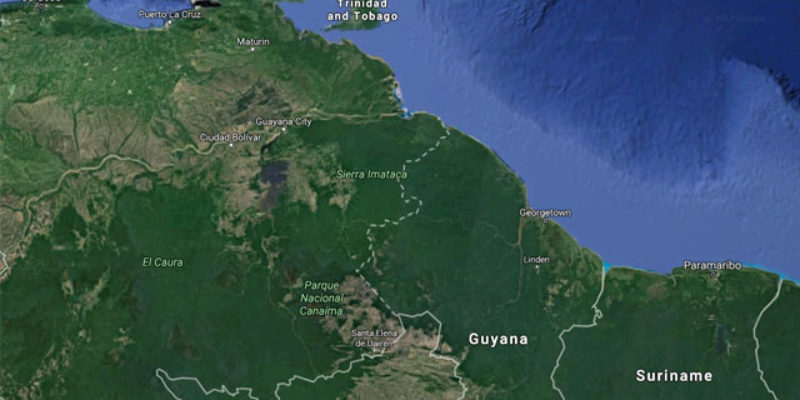 There is a very, very interesting Washington Post article about Rex Tillerson, Hugo Chavez and the tiny South American nation of Guyana which anyone interested in Tillerson’s nomination for Secretary of State should read. It shows that Tillerson is not only a very sharp operator but that he thinks strategically.

Rex Tillerson hadn’t been CEO of ExxonMobil very long when the late president Hugo Chavez made foreign oil companies in Venezuela an offer they couldn’t refuse. Give the government a bigger cut, or else.

Most of the companies took the deal. Tillerson refused.

Chavez responded in 2007 by nationalizing ExxonMobil’s considerable assets in the country, which the company valued at $10 billion. The losses were a big blow to Tillerson, who reportedly took the seizure as a personal affront.

Only Tillerson didn’t get mad, at least in public. He got even.

In the deep blue waters 120 miles off Guyana’s coast, the company scored a major oil discovery: as much as 1.4 billion barrels of high-quality crude. Tillerson told company shareholders the well, Liza-1, was the largest oil find anywhere in the world that year.

ExxonMobil had actually struck an oil exploration deal with Guyana all the way back in 1999, and it usually takes a long time to process from the inception of one of these arrangements to actually producing oil. For a place like Guyana, where there is no infrastructure to support an oil industry because they’ve never really had one, a 16-year lag time isn’t conspicuous at all.

But it’s no surprise that Tillerson did everything he could to develop Venezuela’s neighbor as an oil producing nation at the expense of the Venezuelans who stole his company’s assets. And the Venezuelans got a major case of the screaming reds over his actions…

There was just one problem with this undersea bonanza. Venezuela claimed the waters — and the hydrocarbons beneath them — as its own.

Clearly drilling in the disputed area was potentially a good business decision for ExxonMobil, not some sort of elaborate revenge scheme by its CEO.

But revenge had been served. Venezuelan President Nicolas Maduro, Chavez’s successor, was livid.

“There is a brutal campaign against Venezuela of lies, funded by ExxonMobil … which has great influence at the Pentagon,” Maduro declared, calling the dispute an attempt to corner Venezuela and precipitate “a high-intensity conflict.”

The Stabroek block where ExxonMobil and its partners struck oil is off the coast of a patch of wild South American jungle known as the Essequibo territory. Venezuela and Guyana have haggled over it with oscillating levels of vehemence for more than 100 years. Amounting to two-thirds of Guyana’s surface area, it is, by any practical measure, a part of Guyana and populated by Guyanese people, albeit sparsely.

But Venezuelan claims on the land have long kept foreign investors out. In 2013, a research vessel exploring the area for U.S.-based Anadarko was intercepted by a Venezuelan warship, which temporarily detained the 36-member crew. It was a warning to other companies thinking of partnering with Guyana. Tillerson’s ExxonMobil went ahead anyway.

As soon as the company announced its big find in 2015, Venezuela loudly reasserted its claim on the Essequibo. Faced with mounting economic problems at home, Maduro seemed to welcome the distraction of an external enemy next door in Guyana, particularly the soft-spoken, U.S.-trained Granger, whom Maduro depicted as an American toady.

Maduro ordered military exercises along the border, appealed to the United Nations to intervene, and cast his country as a victim of “imperialist” aggression.

Here’s where it gets fun. There is an organization called CARICOM, which is comprised of 15 member-states located in or bordering the Caribbean, with its headquarters in Georgetown, Guyana. Venezuela has observer-nation status in CARICOM, but since Chavez took power in Caracas he’s showered CARICOM with oil money. And Venezuela brought the territorial dispute to CARICOM – and promptly lost. Granger, the Guyanese president, is also the president of CARICOM. Short of starting a war that would completely destroy what is left of Venezuela’s economy and, were America to get involved, quite likely finish off his regime, Maduro had no choice but to back down.

By the way, if you look at a map of the Essequibo Coast in Guyana the idea the Venezuelans can lay claim to that territory is absolutely laughable. It’s nowhere near the border of those two countries.

The company’s wells in the Stabroek block are beneath about 6,000 feet of water and 11,000 feet of rock. It has the majority investor in a group that also includes the smaller Hess Corp and the large state-run Chinese energy giant CNOOC.

Pavel Molchanov, an industry expert at the financial services firm Raymond James, whose portfolio includes ExxonMobil and Hess, said countries such as Guyana that have no existing oil industry are considered “frontier” locations, and typically offer the most lucrative terms to foreign companies willing to invest.

Guyana’s foreign partners stand to earn 60 to 65 percent of profits, he said, a far larger share than what more established nations are willing to offer investors.
“An investment in Guyana is not a political statement to hurt Venezuela,” Molchanov said. “It’s an example of an early-stage exploration opportunity that has the benefit of good fiscal terms.”

At current oil prices, the Liza deposits could be worth $70 billion, more than 30 times the size of Guyana’s annual GDP.

Is Guyana being exploited? Hardly. Because of the socialist stupidity of the Venezuelan government, what Guyana is going to get is all the onshore infrastructure to service the wells in the Stabroek play that might otherwise be based out of Venezuela. We’re talking about a country with a population of just 800,000 people, 118,000 of whom live in the capital city of Georgetown. That burg will become a colossal boomtown in virtually no time, and the whole country is likely to blossom as a result of that oil wealth, with jobs and capital flowing in and spinning off growth in a whole host of auxiliary industries – construction, housing, tourism, petrochemical, shipping, you name it. Rex Tillerson will have all but created a first-world country out of nothing, and that’s his revenge on the commies in Venezuela – who ran out of toilet paper two years ago and are dumpster-diving for food.

And all without a single gun or bomb at his disposal.

Interested in more national news? We've got you covered! See More National News
Previous Article It Looks Like The Republican State Leges Are Preparing To Go On Offense Against JBE And His Tax Hikes
Next Article Looks Like Fournette Can Afford That 65K Rolex After All…