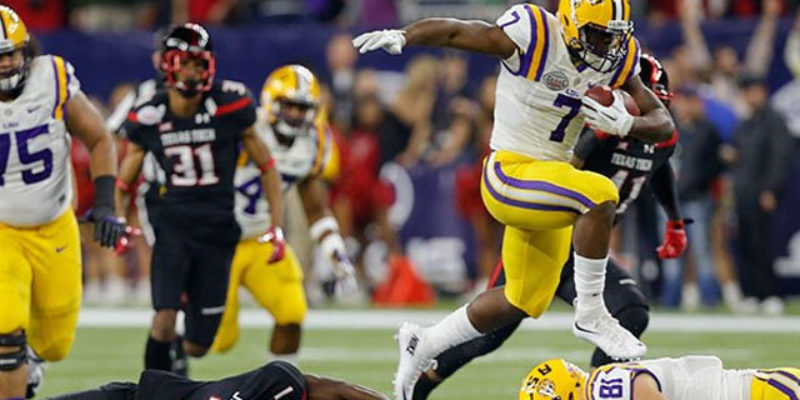 …since he just signed a big, fat endorsement deal with Under Armour.

Former LSU running back Leonard Fournette has signed a deal with the mega sports clothing and apparel company Under Armour, and he’ll hold a pep rally at St. Augustine High on Wednesday announcing the partnership.

Fournette will celebrate his birthday – he turned 22 today – during the pep rally at his alma mater in New Orleans, as well as taking questions from students and introducing a new award named in his honor.

“During the pep rally, Leonard, with Under Armour, will reveal ‘BUGA 5,’ an award that will be given annually to five St. Augustine coaches, administrators and students who exemplify the traits of Fournette’s “Being United Generates Attitude” mantra,” a statement from Under Armour said. “The award is a nod to the inspiring roles that St. Augustine and the New Orleans community played in his development both on and off the field, as Leonard looks to use his birthday to give back to the school, rather than receive.”

Former LSU running back Leonard Fournette on Wednesday signed a multi-year deal with Under Armour that a source tells ESPN is one of the most valuable endorsement contracts ever for an NFL rookie.

“We have a roster of athletes that we choose and we’re never going to be that company that just collects athletes just to have the most,” said Ryan Kuehl, the company’s senior vice president of sports marketing. “We look for special people, who have the talent, the character, the story and the sense of purpose. Leonard Fournette fits that model.”

Fournette said that going with Under Armour means doing something different, just like his decision to go with Jay-Z’s Roc Nation Sports to represent him. The deal closer? “Sitting across from Jay-Z,” Fournette said. “That was crazy.”

The pitch to land Fournette from Roc Nation came with high praise, something the marketplace seems to have bought into, at least with this first deal.

“When we met with Leonard, we told him we thought he was a once-in-a-lifetime running back and that the partnerships he had an opportunity to do with us would be historic,” said Michael Yormark, president and chief of strategy and branding at Roc Nation.

Yormark said he couldn’t disclose the Under Armour deal, but said that financially it fit the characterization of “historic.”

Last year when Ben Simmons signed with Nike after Johnny Jones got finished  wasting his talent on a team that didn’t play in the postseason, the deal was $20 million over four years. Simmons was the first pick in the NBA Draft. Fournette’s deal could be more.

A 22-year old kid who get five mil a year, or more, off a shoe contract is probably gonna drop 65K of it on some bling. It’s not the smartest investment around, but then again if you’re Fournette and you decide to sell that watch you might actually make a profit off it because, assuming he kills it in the NFL, it might actually be a collector’s item.

Either way, this song definitely don’t apply to Fournette any more…

Interested in more national news? We've got you covered! See More National News
Previous Article ExxonMobil’s Guyana Gambit Is A Good Reason Why Tillerson Is Trump’s Secretary Of State Pick
Next Article VIDEO: Watch Mary Landrieu Get Booed By Leftists As She Testifies In Favor Of The Bayou Bridge Pipeline