John Kennedy, Louisiana’s new U.S. Senator, has vowed that he’ll stay very engaged in political affairs back him in the state despite the fact his job is now in Washington, D.C.

Toward that end, he popped out a letter today that seized the populist high ground at the expense of the state’s governor John Bel Edwards – Kennedy suggested that Edwards prevent political officials from profiting by any of the contracts that will come out of FEMA or other federal dollars. 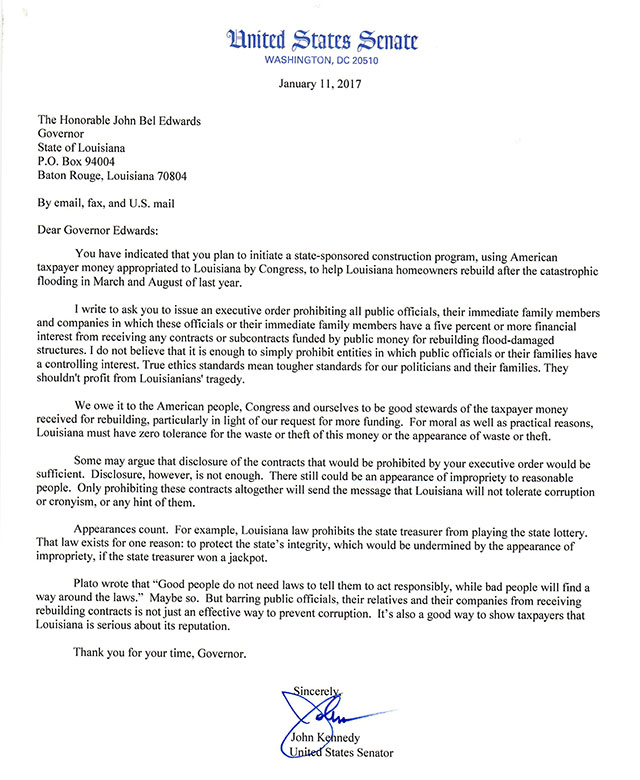 The demand is a little over-the-top in terms of its scope – it essentially means nobody whose family is involved in the construction business can serve in public office for the next two or three years in South Louisiana. As such, it’s difficult to see how Edwards could comply with it.

But when Edwards doesn’t address Kennedy’s concerns, or rejects them outright, he’s going to catch a black eye – and he’s going to look like a crook, or at least someone who abides crooks. That gives Kennedy a platform to continue calling Edwards a crook for the rest of his time in office.

The question is, to what end? Certainly, from a partisan Republican standpoint it’s helpful to weaken Edwards as much as possible – and it’s also helpful from a policy standpoint that a John Bel Edwards who is constantly trying to raise taxes and impose redistributionist budgetary and other policies should lose the political capital that goes with declining approval ratings.

So perhaps Edwards is helping the team. But in reading this letter you can’t help but think he’s also keeping an eye toward 2019. Kennedy is clearly focused on who the governor of Louisiana is – and that begs the question whether he wouldn’t prefer himself in that job next.