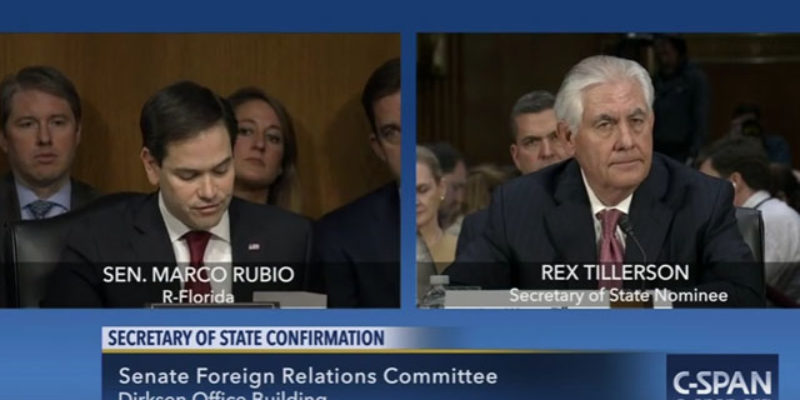 …as he showed his lack of maturity and gravitas.

Rex Tillerson is the nominee for Secretary of State, and he’s the outgoing CEO of ExxonMobil. Tillerson has done a large amount of business, as one might imagine in the case of a major oil company CEO, with and in Russia. And with respect to that business he’s done he’s been at times critical of economic sanctions levied against the Russians, he’s been criticized as too cozy with Vladimir Putin.

This, in the context of criticisms of President-elect Donald Trump for having too cozy a relationship with Putin’s friends in the Russian oligarchy and the two-month-long media blitz over claims that The Russians! “hacked” the American election.

Given all this, it would be reasonable for Tillerson to have to explain his own Russian ties and offer perspective as to how Putin and his government should be dealt with. To that end, Tillerson’s responses to various questions were interesting – asked to place Russia on a spectrum of categories including friends and allies, friendly competitors, unfriendly adversaries and enemies, he said Russia was in the third category and sometimes bleeds into the “enemies” category, and then formed his own formulation – he said they’re either friends, indifferent or enemies and put Russia in the third category.

Tillerson also said when the Russians invaded Crimea the American response should have been to provide Ukraine with defensive weapons, air surveillance of that country’s eastern border with Russia and intelligence – in other words, military support to deter further aggression, which is a far more robust response than the Obama administration offered. If you’ll remember, Obama sent his Secretary of State John Kerry out to blather about how Putin was on “the wrong side of history.” And it ought to be remembered that Kerry’s predecessor Hillary Clinton’s “Russian reset” was itself an obsequious piece of weakness; the reset came in the wake of sanctions the Bush administration had imposed following the Russian incursion in Georgia (the one in the Caucasus, not the one in the SEC), and it included unilaterally dropping those sanctions.

But before the hearing had gone very far, Marco Rubio, who’s on the Senate Foreign Relations Committee which conducted the hearing, jumped down Tillerson’s throat in an outrageous bit of grandstanding. Rubio demanded that Tillerson brand Putin as a war criminal and attempted to pigeonhole him into doing so.

Later, amid better questioning Tillerson said that if proved, the actions described by Rubio would fall within the category of war crimes.

But what precise good is served by making the Secretary of State, who will be charged with participating in a much tougher foreign policy regime toward Russia than the current administration has practiced, call Putin a war criminal by name before he’s even in office? That does no good whatsoever.

It’s not necessary to call Putin a war criminal in order to treat him appropriately. Calling him that is counterproductive to influencing his behavior.

Marco Rubio knows this. Or if he doesn’t, it proves he’s clueless. Either way, he comes off as a child. And that’s why he didn’t win the GOP nomination.