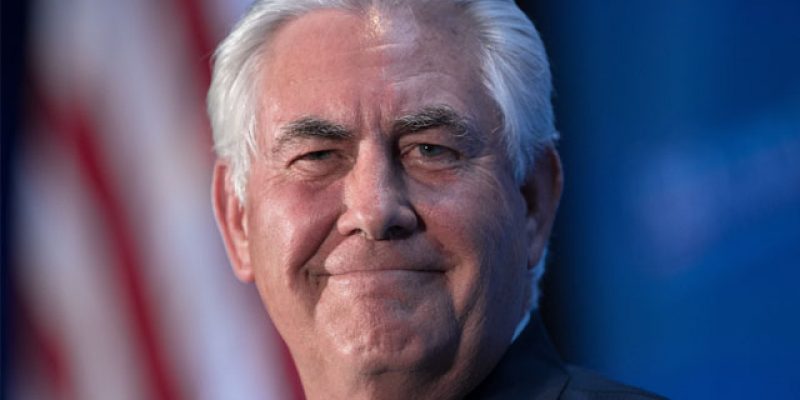 This is the stupidest e-mail we got today, and we get lots of stupid e-mails…

The Senate Committee’s approval along party lines of Rex Tillerson as Secretary of State is a national disgrace and betrays American voters. The full Senate must reject his nomination.

On more than one occasion, including this weekend at the CIA, Donald Trump has suggested that he might start a new war for Iraq’s oil. And now the Senate Foreign Relations Committee has given their stamp of approval to a man Trump gleefully described as leading “this charmed life. He goes into a country, takes the oil, goes into another country…” The Senate should never back war-mongering, resource-stealing bravado.

If the Senate wanted a human rights-violating, climate-denying, fact-bending chief diplomat, then they got their man. But the people of the United States will hold them accountable for Trump’s and Tillerson’s foreign policy, which based on both men’s records, will not serve the interest of ordinary people, at home or abroad.

As CEO of Exxon, Tillerson partnered with governments that committed grave human rights violations, including murder, torture and imprisonment of opponents. Tillerson colluded with corrupt and brutal dictators, while poisoning communities and worsening climate change. The man who the Senate Committee is now sending to the Senate floor has profited from — and has been complicit in — human rights abuses across the globe. He has blood on his hands.

Despite his vague answers, Tillerson has been a climate denier for decades, willing to sacrifice our planet for Exxon’s profits. Friends of the Earth will hold senators accountable for selling out to the United States of Exxon.

Rex Tillerson, who came up from a college graduate signing on as more or less an entry-level employee to becoming a highly-successful CEO of ExxonMobil and made millions of Americans billions of dollars for their retirements…is a national disgrace, according to the tree-hugging assclowns at Friends of the Earth, and in particular it’s a national disgrace to send his nomination to the full house of the Senate.

And then we’re supposed to take seriously the idea that Trump will start a “new” war for Iraq’s oil, when Trump was against the Iraq War in the first place and has attacked George W. Bush in no uncertain terms for having gone into that country in the first place. Trump most recently threw that nugget out there when speaking to the CIA’s employees over the weekend, and it was clear he was running off at the mouth and wasn’t serious about the prospect other than that he’s said he wants to deny ISIS the oil revenues from the parts of Iraq and Syria it controls. Anybody who takes seriously the concept that Rex Tillerson is going to engineer a Trump administration hijacking of Iraq’s oil by way of a fresh War For Oil clearly lacks the basic competency to analyze anything involving substantive policy issues, but here we are.

The Senate must put a stop to this, by the way, by stopping Tillerson’s nomination. How about just putting a stop to Trump’s next War For Oil? There is such a thing as the War Powers Act, as most informed people know, and by simply denying authorization for military action any dangerous forays into a new War For Oil can be short-circuited. Unless the Friends Of The Earth believe Tillerson is on board with Wars For Oil; we’re not sure where the examples of this might be residing, because we don’t know of any.

But then Tillerson is a “human rights-violating, climate-denying, fact-bending chief diplomat.” ExxonMobil has done oil deals with regimes which violate human rights, that’s true – but ExxonMobil doesn’t make foreign policy, nor does it control where there is oil. If oil is found in countries where human rights are disparaged, that’s probably above his pay grade. We already know BP, Total SA, SINOPEC, Rosneft, Shell and several other foreign-owned oil companies will do oil deals anywhere in the world without much regard to the human rights record of the governing regime; one wonders why ExxonMobil is supposed to be much different.

And Tillerson “denies the climate.” Sure he does. Apparently he denies it four times a year when it changes.

Here’s what’s great about this press release, coming as it does from Erich Pica, the hack president of Friends of the Earth – nobody of consequnce, and we mean NOBODY, cares what this man and his organization thinks about Rex Tillerson’s nomination.

Friends of the Earth is such a nutjob organization that it actually opposed the Waxman-Markey cap-and-trade bill back in 2009 because they didn’t think it went far enough. Pica, the president, was head of FOE’s domestic policy department at the time and made that call; after Waxman-Markey thankfully died they gave him a promotion and let him run the whole place. Since then they’ve become progressively more irrelevant, to the extent that now they’re reduced to attempting to be the loudest howlers about Tillerson’s nomination.

Tillerson is going to be confirmed, likely along party lines and possibly after Mitch McConnell nukes the filibuster – though not certainly. Democrats might choose not to filibuster him in the knowledge that he’ll ultimately be confirmed and they risk much in attempting to stop it. Either way, Friends of the Earth won’t play much of a role in the confirmation process, and rightly so. They’re not qualified to make State Department policy recommendations – or anything else.

Interested in more national news? We've got you covered! See More National News
Previous Article Mitch Landrieu’s and JBE’s New Plan To Fight Crime In New Orleans Is Every Bit Of A Joke As You Would Expect
Next Article Meet Your New Chair Of The House Water Resources Subcommittee, Garret Graves