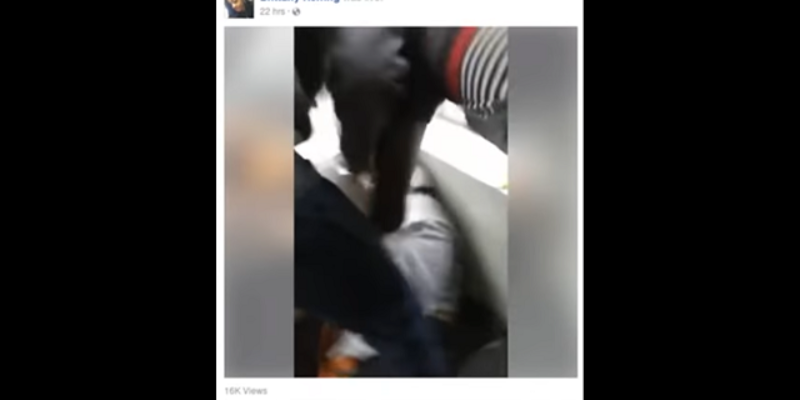 Yesterday, four black thugs in Chicago kidnapped a white special needs kid and tortured him. They broadcast the torture of the young man on Facebook live.

Here’s the 30-minute long video of the attack. WARNING: the video is extremely graphic and disturbing.

These thugs tied up the kid, beat him, sliced him with knives, cut his clothes off even though the weather in Chicago was extremely cold, made him drink from a toilet, threatened to kill him, and flicked cigarillo ashes on his open head wound. During the attack, the thugs kept shouting “f*** Donald Trump” and “f*** white people.” They even choked him until he said “f*** Donald Trump.”

The attack was soon broadcast all over the internet under the hashtag #BLMKidnapping, but to be fair Black Lives Matter was not even mentioned by the attackers.

Chicago police arrested the attackers and amazingly, they’re claiming it’s not a hate crime. There seems to be little concern about the attack from the usual suspects have been “concerned” about pro-Trump hate crimes.

The media and the left have been promoting the narrative that Trump’s election has unleashed hate crimes and general nastiness. But it has been the left who has gotten violent since Trump’s election. They have unleashed vandalism, riots, and violence against Trump supporters and whites. Meanwhile, most of their so-called hate crimes have turned out to be hoaxes.

What should happen to these four thugs? First of all, I wouldn’t support charging these people with hate crimes. Hate crimes are BS and we need to get rid of them because they punish the thoughts of the perpetrators and not their deeds. But I would charge these people with everything possible under the sun and when they’re convicted, they need to be punished to the fullest extent of the law.

Meanwhile, the left needs to own their hypocrisy on hate crimes and racism.

Interested in more national news? We've got you covered! See More National News
Previous Article Mars, Or The Moon?
Next Article CASSIDY: Here Is Your Long-Awaited Replacement For Obamacare