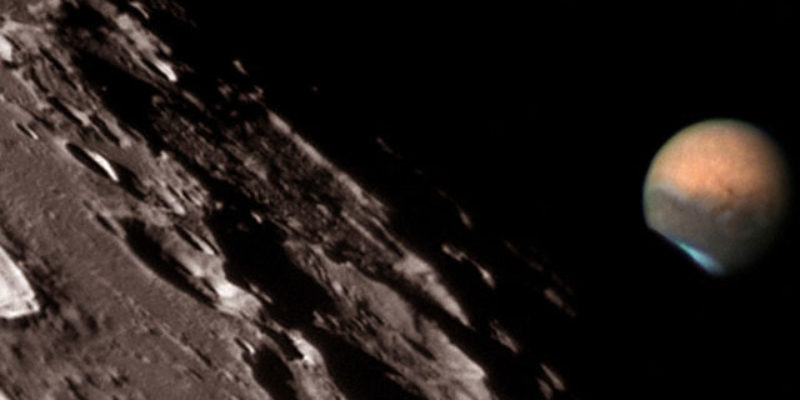 There’s an interesting piece at The Atlantic about how there are people on Donald Trump’s team – including, but not limited to, Newt Gingrich – who favor the building of a base on the moon as a major activity of the American space program.

It’s a rather unfriendly piece, as author David Brown makes the case that a moon base likely kills momentum for our ever going to Mars…

Chris Carberry, CEO and founder of Explore Mars, a nonprofit Mars advocacy group, argues that far greater opportunities exist on Mars, and that a return to the moon might delay Mars settlement by decades. Mars has carbon, nitrogen, oxygen, and hydrogen—everything a colony needs to be self-sustaining. With those ingredients, you can do everything from manufacturing plastics to cultivating the soil. In other words, you can build a base on the moon, but a civilization on Mars. Moreover, Carberry says that the red planet has never been in a better position politically, culturally, or scientifically.

“Right now we have an unprecedented level of support for Mars exploration,” Carberry says. “Frankly it would be foolish to throw that away. There’s a huge amount of support on Capitol Hill. The Senate just passed a transition bill with the strongest Mars language ever put into legislation. The House did a previous authorization bill with very strong Mars language as well. There are many years of bipartisan support for Mars—also for the moon, but the strongest emphasis is on Mars. That goes for industry as well. Boeing, Lockheed, Aerojet Rocketdyne, SpaceX, and others put quite a bit of effort into designing a mission architecture.”

If you’ve paid attention to the saga of SpaceX, Elon Musk’s rocket company which has done some amazing things in moving the ball forward to privatize space travel, you know that the entire company is oriented toward ultimately building a Mars colony. Musk’s rationale is that at some point Earth is going to get hit with that planet-killer asteroid and there will be an extinction-level event here that will wipe out humanity if we don’t get off the planet with a colony somewhere else, and since Mars represents the only possibility for a self-sustaining colony we’re going to be able to build within the lifetime of anyone currently alive, that’s where the focus should be.

NASA, which put a man on the moon in 1969, has been putting things on Mars for 40 years – and has more or less abandoned the moon. The only people in the space business talking about the moon are at the European Space Agency. As Brown notes, talk is more or less all they’re doing (they are Europeans, after all)…

Perhaps the most prominent moon advocate on Earth is Jan Woerner, the director general of the European Space Agency. Since assuming the post, he has argued persuasively that a “lunar village” is the natural successor to the aging International Space Station. It would be, in his view, a celestial point of harmony for a terrestrial species in discord. There is a problem, however: the Europeans have committed virtually no money to a moon village, and Russia, ESA’s would-be partner in the venture, has no money to commit. They have already been forced to downsize their presence on the ISS due to costs, and have delayed plans for robotic exploration of the moon. (The head of the Russian space agency admits that Russia “does not have financial capabilities for advanced space projects.”) Lacking unity among member states, to say nothing of technology development and financial resources, what ESA really needs is for the United States to fund and spearhead such an effort. NASA’s sights, however, are firmly fixed on Mars. With the presidential transition, however, and a new NASA director still to be appointed, lunar champions at home and abroad see an opportunity to abandon the Journey to Mars program and set sights a little closer to the Earth.

To that end, ESA is on a moon base public-relations offensive, from the light and easy (magazine spreads and aspirational illustrations) to bare-knuckled politics  (publicly pressing the NASA administrator on the issue.) The overt message from Paris, where ESA is headquartered, is: We’re doing this. The subtext is: While NASA plans a fantasy mission to Mars that will never happen, the rest of the world will be driving moon buggies and mining helium-3. But ESA’s campaign is powered by handwavium, and for all the illustrations of lunar domes and our great big blue marble over the horizon, progress on the moon base ends at Photoshop. If the U.S. doesn’t build the base, it won’t get built.

This happens to be a case, however, where the Europeans are probably right.

There has been a good deal of hype given to the idea of going to Mars in recent years by Hollywood – the Matt Damn movie The Martian was a huge hit a couple of years ago, for example, and there was the National Geographic Channel series Mars, produced among others by Ron Howard, late last year – which made a manned Mars mission out to be something more or less inevitable.

But if you have interest in these things and you do a little research, what you find out is that putting people on Mars to stay without putting them first on the moon is a pretty dumb idea, and probably a good way to kill a bunch of brave astronauts on the way to making the world’s taxpayers thoroughly uninterested in the idea of off-world colonization.

Because even in the Hollywood vehicles pushing Mars exploration, you can get a good picture of how incredibly hostile Mars would be to colonization from Earth.

First, there is the fact that Mars’ orbit around the sun is twice as large as that of Earth’s. A year on Mars is 687 days. And Mars’ orbit is elliptical, like Earth’s is. But the two planets don’t have orbits which are in synchronicity – not by a long shot. Mars can be on the opposite side of the sun from Earth, for example, and when that happens Mars will be as much as 249 million miles away. The closest the two planets have been together, by contrast, was in 2003, when they were only 34 million miles away.

So what you have is a series of launch windows to send a spaceship to Mars which are 2-3 years apart. Miss a launch window and it could be six years between missions to resupply a Mars colony or to rescue astronauts there should something go wrong. Which means your Mars colony is very likely going to fail unless the technology of keeping its people alive has been perfected.

That technology probably needs to be perfected on the moon.

The other thing to understand is that Mars isn’t all that different from the moon once you’re there. Yes, Mars does have an atmosphere. But it’s 96 percent carbon dioxide, so you certainly can’t breathe it, and it’s worse than that – the air pressure on Mars is less than one percent what it is on Earth, so there is scant little to breathe. That atmosphere, even with all the CO2, isn’t close to dense enough to grow plants in. With so little atmospheric density not only can’t you breathe, but your bodily fluids start to boil no matter the temperature.

And then there’s the temperature. Believe it or not, it will actually get as warm as 70 degrees Fahrenheit on Mars. But it will get as cold as -195 degrees. Those temperature extremes are less pronounced than on the moon, where the highs during the day get up to 250 degrees and the lows at night go down to -243 (the reason for this is a day on Mars is an Earthlike 25 hours; the moon spins a whole lot slower on its axis and it takes about a month for the moon to complete a day), but the point is that any colony on either place is going to have to figure out a way to regulate temperature with little or no help from nature.

Furthermore, Mars doesn’t have a magnetosphere like Earth does, and this is important because it’s Earth’s magnetosphere which prevents solar radiation from nuking the place and turning it into a lifeless rock. To build a colony on Mars, just like on the moon, would involve great effort at shielding its residents from radiation. In both places, that’s likely going to mean getting underground. The literature discussing both talks a lot about finding lava tubes in which to place settlements, or perhaps you’re looking for a nice, deep crater which doesn’t catch as much of the sun’s rays, but it might just be that building a colony will involve a lot of digging. This is going to be a nightmare in either place.

For those reasons, not to mention lots of others, your chances of coming up with workable solutions and keeping your people alive – or evacuating them in time to save them if everything goes down the tubes – are a whole lot greater when your colony is only 250,000 miles away, a distance coverable in less than a week, than if it’s 50 million miles away when things are just right every three years.

And then there’s a final reason why the moon makes more sense, which is Helium-3.

Because the moon has no magnetosphere, solar winds have deposited enough junk on the moon enough to create some 1.1 million metric tons of Helium-3, as opposed to there being practically none of the stuff on Earth because our magnetosphere deflects it away.

Why do we care about this? Because Helium-3 is seen as the element necessary for fuel if we’re ever going to make nuclear fusion work as a source of energy. And 1.1 million metric tons of it would be enough practically forever; it’s estimated that just 40 tons of it would power the entire United States of America for a year.

Meaning that a technology we aren’t far away from realizing would require a fuel we know is abundant at a place we could get to in a week with the right equipment – where conditions are similar in terms of hostility to human life as the other place, which so far as we know doesn’t have much of anything we don’t have here on Earth and is too far away to economically bring any of it back even if we did find something.

The moon isn’t as sexy as Mars is, but you might be able to turn a profit on the moon thanks to nuclear fusion and Helium-3. With Mars what you get is astronauts going stir-crazy on a space ship while losing bone and muscle density thanks to being in a zero-gravity environment for far longer than their bodies would plausibly be able to handle, and a very real worry that they’d be physically unable to perform the tasks a manned mission there would require of them after such an ordeal…all for the sake of science and without any particular possibility the project ever pays for itself.

This isn’t that hard a call to make.

Go to Mars? Sure. At some point. But we shouldn’t be in a hurry. Go back to the moon and stay a while, and figure out how to live there. Once that’s been mastered, going to Mars will be easier and it will be better understood what to do when we get there.

Interested in more national news? We've got you covered! See More National News
Previous Article WATSON: Voter Fraud Is Real, And Sessions Should Tackle It
Next Article That Whole “Love Trumps Hate” Thing Is Turning Out To Be Bloodier Than Expected