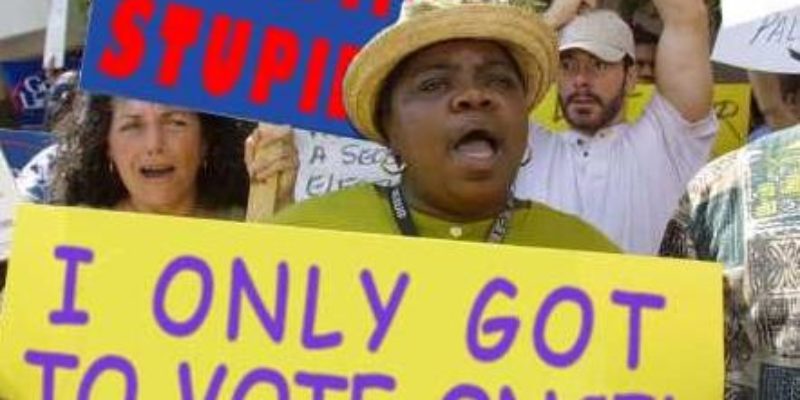 After the Presidential election, President-Elect Donald Trump tweeted that he “won the popular vote if you deducted the millions of people that voted illegally.” Naturally, the liberal backlash was swift, and PolitiFact rated his claim as “Pants on Fire.”

It’s very likely untrue that voter fraud numbers ranged in the millions-enough to give Trump a popular vote victory as well as his electoral college win, but voter fraud is a much bigger problem than most people may think.

At the Leadership Institute’s monthly Wednesday Wake-Up Club Breakfast on January 4, Hans Von Spakovsky, a member of the Federal Election Commission under President George W. Bush, presented shocking statistics on the real problem of voter fraud in the United States. Von Spakovsky, currently a staff member at the Heritage Foundation, pointed to a running database he helped compile at Heritage that documented confirmed cases of voter fraud. In all, the database shows 462 different cases of voter fraud nationwide, and 742 individual criminal convictions as a result, including 113 different cases in Minnesota, the state that sent Al Franken to the US Senate by a mere 312 votes. Remember: Al Franken was the 60th vote for Obamacare. Prosecuting voter fraud in Minnesota could have literally stopped Obamacare.

If you’re still not convinced that it’s a problem, Von Spakovsky also cited his work on the Fairfax County Board of Elections in Virginia, where he served as vice-chairman. After discovering non-citizens on the voter list in the county, and subsequently scrubbing them from the rolls, Von Spakovsky worked with the Public Interest Legal Foundation to find out how many non-citizens had been tossed from voter rolls in other counties and independent cities in Virginia. Twenty counties refused the request, although they were, according to Van Spaovsky, legally required to submit the names. Eight counties sent back their results; in total, 1,100 non-citizens in those counties had been registered to vote in Virginia before being removed from the voter rolls. There are 95 counties and 38 independent cities in Virginia where statewide races have lately been decided by razor-thin margins.

If that isn’t bad enough, Democrats across the country – including in Louisiana, where they ran a candidate for Secretary of State in 2015 whose campaign was built around this – are advocating for automatic voter registration, which would automatically register those who interact with government offices, like the DMV, to vote. In California in 2015, where those here illegally can receive a driver’s license, 605,000 illegal immigrants received a license. And in the same state, on the ballot in San Francisco in the November election, was a proposal to allow non-citizens to vote in local elections. It passed.

Attorney General nominee Jeff Sessions’ first job needs to be to tackle voter fraud. Not to say that stopping voter fraud would have given Trump the popular vote victory, but in close races like Franken’s in Minnesota, just a handful of cases of fraud can go a long way. Von Spakovsky made mention of the application for naturalization in the United States, which asks if the applicant has voted or registered to vote already. The files are held by the Department of Homeland Security and could be key in reducing or eliminating voter fraud in the US.

The election hacking the media has become so enamored with recently is real-but it’s not the Russians orchestrating it.