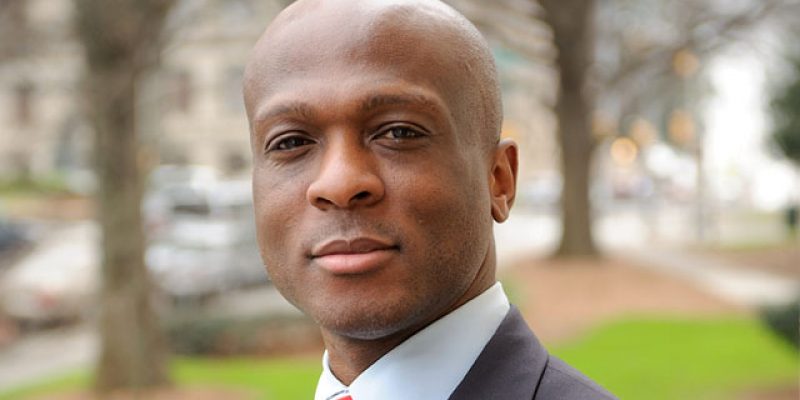 For all the Left’s warbling about sexism, homophobia and gender, it turns out they’re not all THAT serious about them. At least that’s what one minor candidate for the job of running the party just found out…

The Democratic National Committee is kicking a candidate out of the chairman’s race after he told The Hill that Rep. Keith Ellison (D-Minn.) should not be the party’s next leader because he is Muslim.

In a Jan. 5 email to The Hill, Vincent Tolliver, a former House candidate in Arkansas, said that Ellison, the first-ever Muslim elected to Congress, should not be chairman because of Islamic positions on homosexuality.

“His being a Muslim is precisely why DNC voters should not vote for him,” Tolliver wrote. “Muslims discriminate against gays. Islamic law is clear on the subject, and being gay is a direct violation of it. In some Muslim countries, being gay is a crime punishable by death.”

“Clearly, Mr. Ellison is not the person to lead the DNC or any other organization committed to not discriminating based on gender identity or sexual orientation,” Tolliver continued. “I’m shocked HRC [Human Rights Campaign] has been silent on the issue. A vote for Representative Ellison by any member of the DNC would be divisive and unconscionable, not to mention counterproductive to the immediate and necessary steps of rebuilding the Democratic Party.”

Tolliver wasn’t actually a candidate for DNC chair when he made those comments, but it doesn’t matter. You’re not allowed to criticize Islam in the Democrat Party, even if you’re doing so by taking the side of the LGBT crowd.

In truth, he’s easy to rub out as a candidate, because Tolliver doesn’t offer much to the party. He’s a 49 year old writer who has dabbled in politics – Tolliver is probably best known for an unsuccessful 1996 congressional run against Republican Jay Dickey in Arkansas – but has never won a race he’s been involved with. Tolliver made a little news three weeks ago by blaming Hillary Clinton’s loss on her choosing Tim Kaine as a running mate instead of Corey Booker. Two weeks ago he wrote a piece for the Huffington Post outlining a vision for the party that few of its activists appear interested in, and for good reason. A taste…

Nowadays everyone has a cell phone and many (especially the coveted 18-35 demographic we should aggressively recruit) listen to music through earphones wherever they are (i.e. home, school, work, car, truck, bus, tractor and other various farm equipment, 18 wheeler, train, airplane, mall, neighborhood, walking jogging, running, gym, restaurants, etc.). So, why not use cell phones and music to help in our efforts to rebuild the Democratic Party from the ground up? It’s simple. It’s easy. And it makes a lot of sense.

Everyone has a pair jeans and a t-shirt. Adding t-shirts/jeans to the cell phones and music component will help with our identity issues and also assist with branding the Democratic Party. As part of our Grassroots movement, we will encourage the wearing of t-shirts/jeans.

Further, we will encourage new recruits and experienced Democrats alike to write DEMOCRAT (in crayon, color sharpie, blue markers, paint, or whatever is available) across the tops of t-shirts. Below DEMOCRAT should be “I love” and below that should be a personal musical favorite. For me, it could be Dolly Parton, Beyonce, Metallica, Kendrick Lamar, Aretha Franklin, Barbara Streisand, Taylor Swift, Adele, Outkast, Tim McGraw, Jay-Z, etc.

It doesn’t really matter who you musically love. What matters is the t-shirt begins the conversation which begins the work, which promotes and REBUILDS the brand―-the Democratic Party.

The Democrats might have been looking for a reason to get this guy off the stage, as he’s a clown. But how about the signal they sent? Chewing out socially-conservative Christian Republicans for their opposition to gay marriage or defense of bakers, florists and others who don’t want to service gay weddings, while silencing criticisms of Muslims for that faith’s imposing a death sentence on homosexuals is a little difficult to square – and that’s part of the reason Democrats are in the political wilderness following the November elections.

This episode doesn’t exactly offer a road map out of that wilderness.

Interested in more national news? We've got you covered! See More National News
Previous Article Here’s Who Will Be Running In March’s Legislature Special Elections
Next Article VIDEO: Here’s A Tucker Carlson Double Feature, With An Uncommonly Stupid Congressman And An Old Lady With Purple Hair