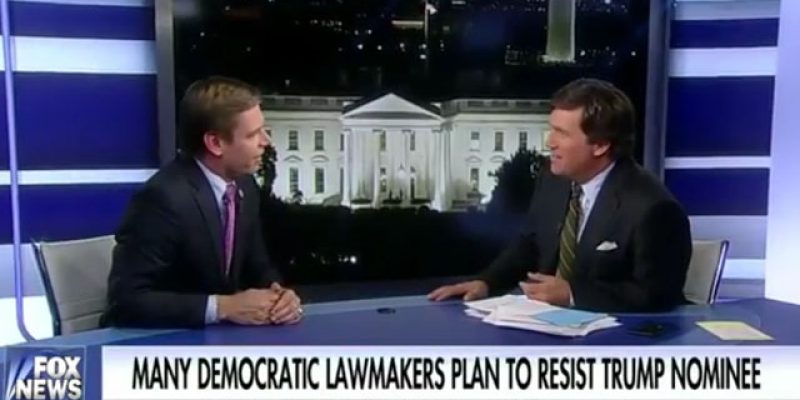 The occasion of Neil Gorsuch’s nomination to the Supreme Court tonight gave Tucker Carlson an opportunity to lay waste to some of the usual suspects on the other side of the political fence – particularly two Democrats who swore opposition to the nominee before even knowing it would be Gorsuch.

If you’ve seen Carlson’s show you probably already know such people wouldn’t fare very well under his cross-examination. And they didn’t.

Take Marge Baker, a spokesperson for the leftist outfit People For The American Way who was found loitering about the Supreme Court building tonight before Carlson put her on TV. If you can get past the lavender tint to her hair, you will hear two basic things in this eight minute segment with Carlson – first, that her organization lacks much in the way of specifics for why Gorsuch isn’t qualified for the Court but Gosh-darnit they’ll have something on their website soon. And second, and it’s worth watching to the end to see this, she concedes without really recognizing she’s doing it that it’s illegitimate to call Neil Gorsuch a racist as the left incessantly has done with virtually every Republican judicial nominee.

Following that rather amusing vivisection, Carlson next had Rep. Eric Swalwell, a California Democrat congressman who defeated corrupt incumbent Pete Stark to win his seat in 2012. No one has heard of Swalwell outside of his district, and this segment showed why – as advocates of the Democrat position go, he’s one of their dimmer bulbs. Carlson cheerfully led him off one rhetorical cliff after another and Swalwell didn’t even seem to recognize what was happening to him.

Here was Carlson’s segment with Swalwell, which goes a little more than 14 minutes and is a jaw-droppingly humiliating evisceration of a member of Congress…

We keep posting these segments with the same warning – namely, that this kind of rampage can’t continue. Ultimately Carlson is going to run out of Democrats to humiliate on national television. But until he does, his show is nothing short of breathtaking as an exposition of the inferiority both of the left’s logic and the cognitive ability of its advocates.

Interested in more national news? We've got you covered! See More National News
Previous Article The Democrats Just Disqualified One Of Their DNC Chair Candidates For Criticizing Islam
Next Article What To Make Of Dick Durbin’s Statement On Neil Gorsuch?