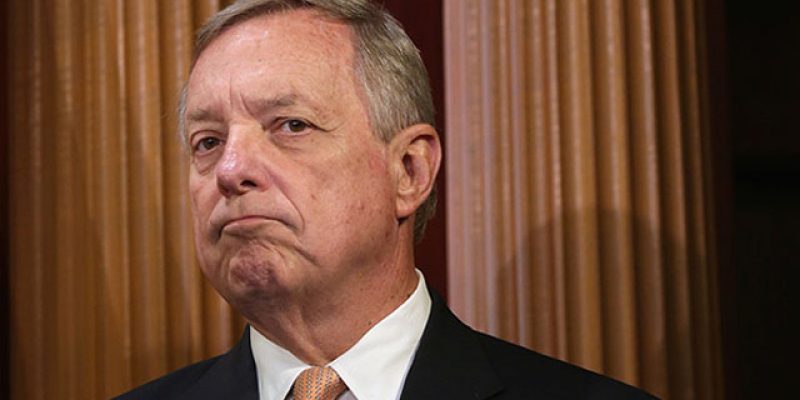 It’s a lot of tough talk, but if you’ll notice what Durbin is saying – he says he supports a vote on Gorsuch. As in, no filibuster.

You’re going to hear a great deal of bitching out of the Democrats over the fact Merrick Garland didn’t get a confirmation hearing last year; much was made of the Republicans’ having decided they weren’t going to let that nomination go forward since to do so would be to allow a lame-duck president to fundamentally alter the ideological balance of the Supreme Court. The Senate Republicans figured it would be better (for them, obviously, but perhaps for the country) to let the electorate decide the balance of the court in November.

And the public was obviously OK with that idea, because not only did Trump win the election but the GOP held on to the Senate in a year where the map of seats up for re-election did not particularly favor Republicans.

All of which means this “payback” business about Merrick Garland is a political loser. Nobody cares about Merrick Garland’s problems; no more than they care about Dick Durbin’s problems. They’ll care about Gorsuch, because he’s the nominee. And if Durbin wants to piss and moan about Garland while the Democrats agree to move Gorsuch’s nomination forward to a vote, that’s fine.

Because what might be underlying this whole business is Durbin, and the rest of the Democrats, know they don’t have a leg to stand on where Gorsuch is concerned. In 2006 when Gorsuch was put up for his current seat on the U.S. 10th Circuit Court Of Appeals in Denver, he was confirmed by the Senate unanimously. Durbin voted for him, too. They might hate that he’s similar to Antonin Scalia, who he replaces, but their feelz are not a priority of the public’s.

Durbin, and probably the rest of the Democrats, know this. Which might explain why despite all his bluster he let slip that he’s not pushing a filibuster for Gorsuch.

On a related subject, here’s an American Spectator column exhorting Mitch McConnell to get tough with the Democrats and put a stop to their obstruction of Trump’s nominees.