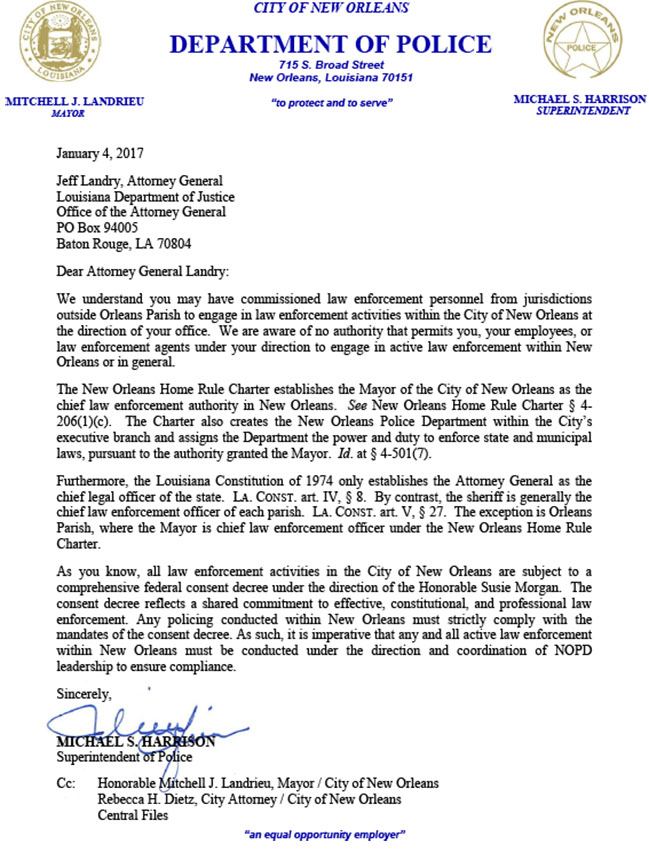 It’s a little perplexing to make the case that the Attorney General, whose constitutional role in Louisiana’s government makes him the state’s chief legal officer and grants him investigative powers in criminal matters, is not allowed to engage in law enforcement. That’s the type of contention which tends to be sorted out by a court, and so far Landry has tended to win such battles.

But what will be a very interesting question indeed is this business that the federal consent decree agreed to by New Orleans mayor Mitch Landrieu after the mayor stupidly brought Eric Holder in to “reform” the NOPD at the beginning of Landrieu’s first term is binding on all agencies practicing law enforcement in the city. That consent decree has rightly been attacked as damaging to any attempts at diminishing crime in the city, and since it went into force violent crime in New Orleans has risen relatively sharply.

Over the weekend, the New Orleans Advocate had a long piece about Landry’s #MakeNewOrleansSafeAgain social media push, and was largely dismissive of it as an effort to delegitimize the current status quo in law enforcement – including quotes from David Caldwell, the son of the former Attorney General Landry defeated in the 2015 election, which was rather a conspicuously hostile source for the article, poo-poohing Landry’s efforts to fight crime in New Orleans.

Included in the piece was this gem…

“He’s putting the lives of my police officers and the lives of state troopers at risk,” Landrieu told The Advocate on Friday, referring to Landry. “He doesn’t seem to understand that policing is a partnership.”

This from a mayor who’s running a police department some 400 officers short of a full roster and overseeing a city which is statistically more dangerous than Chicago. The article included guffawing from Caldwell over the fact that Landry’s task force, which ranges from five to 16 people depending on resources it’s able to marshall from other police forces in southeast Louisiana, has only been able to claim 16 arrests so far – NOPD’s complement is 1200 cops, with an astronomically larger budget. It’s obvious Landry’s efforts are in the nascent phase, which is why Landrieu and his allies are doing everything they can to strangle those efforts in the crib.

The Advocate piece also included the story of a carjacking of a black couple in New Orleans East in which Landry’s Louisiana Bureau of Investigation task force participated in a chase and an arrest of two teenagers, with an interesting bit of information to be found at the end…

The most dramatic incident to involve Landry’s task force so far was a Dec. 2 pursuit of two alleged armed carjackers from New Orleans East to Algiers. The NOPD said officers and task force agents pursued a stolen car across the Crescent City Connection to the 4100 block of Copernicus Street, where the vehicle crashed. Two teenagers were arrested on the scene.

For Landry, the incident is proof that his agents can make a mark in cases where NOPD officers are hamstrung by what he called a “hug-a-thug” federal consent decree. He said NOPD policy would have prevented officers from embarking on the pursuit. “It places virtual handcuffs on the NOPD,” he said of the department’s sweeping reform agreement with the U.S. Justice Department. “That is not going to take violent criminals off the street. It has a plethora of problems.”

Scanner traffic, however, suggests that while Landry’s LBI agents may have initiated the chase, NOPD officers were on the road right beside them. Both agencies surrounded the crashed car, according to an NOPD news release sent out the same day. Mention of the LBI has since vanished from the version of the release on the Police Department’s website.

It vanished because quite obviously someone from either Harrison’s inner circle or Landrieu’s office had a coronary over the idea Landry might get credit for helping to fight crime in the city. Particularly given Harrison’s letter to Landry telling him he’s not allowed to fight crime in New Orleans.

The next step in what looks like an escalating fight will be for Landry to continue building a media presence in New Orleans to tout the #MakeNewOrleansSafeAgain initiative, while Landrieu continues his attempts to disparage the Attorney General’s involvement and to attempt to push him out.

If it plays out that way, Landrieu had better hope for a year full of terrible weather in New Orleans which keeps the criminals off the streets. Because every high-profile instance of violent crime will only build Landry’s narrative and give a boost to his calls for resources to step in, and serve to make a fool of the mayor who refuses help from out of town.