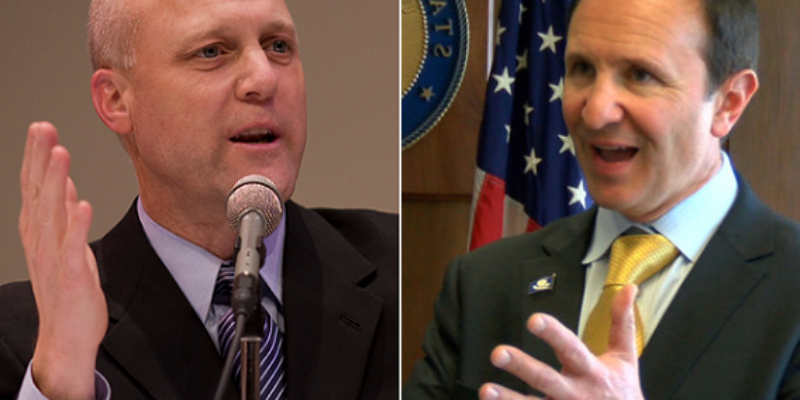 WWL Radio in New Orleans has a story with some red-hot quotes from Louisiana’s attorney general about crime in New Orleans. Jeff Landry has announced he’s opening a new initiative to do something about it.

Landry says they have a Violent Crimes Taskforce to assist patrol officers in the French Quarter during special events like football games and concerts. But he says they don’t have the necessary resources to give police extra assistance year-round, and there is crime throughout the Crescent City, not just the Quarter.

“If you push them out of the Quarter, they’re just going to go back into those neighborhoods. So we want a holistic approach.  We want something that solves the problem for all of New Orleans and keeps all New Orleans residents safe,” Landry said.

Landry’s pushing a social media hashtag – #MakeNewOrleansSafeAgain. He was fairly busy on Twitter with it today…

Jeff Landry fighting to #MakeNewOrleansSafeAgain! We must end "Hug a Thug" and fight crime in New Orleans. https://t.co/caDF5obDqC

This is not about politics; my effort is about protecting Louisiana lives and our economy tied to tourism in NOLA. #MakeNewOrleansSafeAgain https://t.co/K7zLFX2CS8

Landry’s numbers are fairly damning. Shootings in New Orleans rose by 25 percent in 2016, and homicides went up by 7 percent. And he doesn’t mince words about who he thinks is responsible – that would be Mitch Landrieu, who he says hasn’t offered any leadership in fighting crime and who he blames for signing a consent decree with Eric Holder’s Justice Department, which he says has hamstrung the New Orleans Police Department to the point of ineffectiveness.

“There are a lot of fine men working for the New Orleans Police Department, but they’re basically, virtually handcuffed while the mayor and them want to work on some sort of hug-a-thug crime fighting policy,” Landry said.

The “hug-a-thug” crack is going to stick – that’s fairly obvious. It’s too good not to, and what’s more Landry will get all the right people screaming bloody murder and calling him a racist for it.

Which might give him an opportunity to do a real public service for society, which is to explode this stupid narrative that it’s somehow racist to get tough on criminals. For all of the caricatures made about that subject, that somehow Bull Connor is coming in to protect white people from innocent poor blacks who stand to be brutalized in the name of law and order, the truth of the matter is that the number one most likely victim of violent crime in America – and New Orleans in particular – is a black citizen. And the most crime-ridden neighborhoods in the Big Easy are black neighborhoods, meaning it’s law-abiding black people who are subjected to bad quality of life, a lack of personal safety and an inability to keep anything of worth in their homes or on their persons because of a well-justified fear the criminals will just take it away.

Mitch Landrieu, who bills himself as the best friend black people in New Orleans ever had, does nothing at all to help those law-abiding people. Landry is calling him out for it and promising to step in.

To do so he’s going to need funding, obviously, so it’s a good bet where this is going is a push at the legislature this spring to get more money for the Violent Crime Task Force to increase its presence in New Orleans and push past NOPD to make a difference.

And this will be interesting from a political perspective. Because as we’ve discussed several times here at the Hayride, there is a well-recognized political feud going between Landrieu and Gov. John Bel Edwards – a feud which most recently manifested itself when Landrieu backed Caroline Fayard in the Senate race last year while Edwards endorsed Foster Campbell, and the two spent the primary at each other’s throats.

So what does Edwards do about this? He hates Landrieu, and he hates Landry. Politically, it might actually do him some good to back Landry on this, because doing so would kneecap Landrieu and make Edwards look like he’s a law-and-order politician. Except Edwards won’t be able to take any credit for any successes Landry might have courtesy of funding he signs off on; Landry will make sure of that. What he’ll get for his trouble is Landrieu’s vindictiveness, and likely sabotage against Edwards’ re-election effort in 2019 when Landry is the most likely major challenger.

Or he can back Landrieu and fight Landry, which is what he’s been doing on a number of other issues. Badly, as it turns out – if he’s beaten Landry in court yet we haven’t seen it, and most of his PR offensives against the AG seem to have fallen flat. If he backs Landrieu and accuses Landry of playing politics with law enforcement, it’s going to look like Edwards is weak on crime. Let’s also remember that Landry got a pretty good chunk of the black vote against Buddy Caldwell in last year’s election, and he’s made a few alliances in the black community. If Edwards fights him on #MakeNewOrleansSafeAgain, he opens up the narrative that not only doesn’t Landrieu care about the safety of black citizens in New Orleans, but neither does Edwards, and why should anybody in the black community be loyal to these people in the future.

Bear in mind that this doesn’t have to work on a majority of black voters. If it works on a fifth of them Edwards is finished politically.

This initiative is worth watching. So far it’s simply an awareness campaign and a media offensive, perhaps backed with a bit of law enforcement activity from the task force that will occasionally result in a headline. But as Landry pushes to make it larger, it has the potential to turn into a major disruption within Louisiana politics – and, should it actually make a dent in crime in New Orleans, a path to the Governor’s Mansion for him in 2019.

Interested in more news from Louisiana? We've got you covered! See More Louisiana News
Previous Article That Whole “Love Trumps Hate” Thing Is Turning Out To Be Bloodier Than Expected
Next Article VIDEO: Odell Beckham, Jr. As An Undercover Lyft Driver