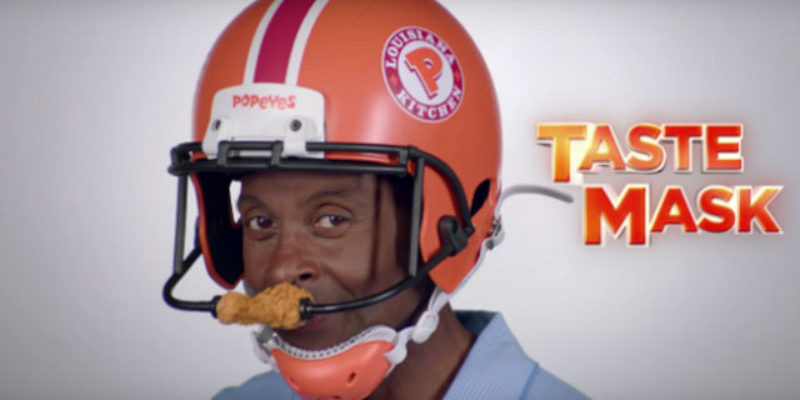 In case you haven’t seen it, Popeye’s Fried Chicken has a new celebrity spokesman. It’s Jerry Rice, the NFL Hall of Fame wide receiver. Rice is in a number of commercial spots Popeye’s has produced, and they’re all very tongue-in-cheek and funny. It turns out Rice is a pretty good comedic actor to go with his pass-catching talents.

For some reason, though, it appears that at least one of the spots isn’t politically correct enough to suit the Perpetually Outraged on Twitter. Here’s the offending ad…

No, there isn’t really a Popeye’s football helmet that spins wings in front of the chin guard. It would be hilarious if there was.

Rice is hamming it up in the ad. So what? He’s having fun with it.

But the reaction is, well… 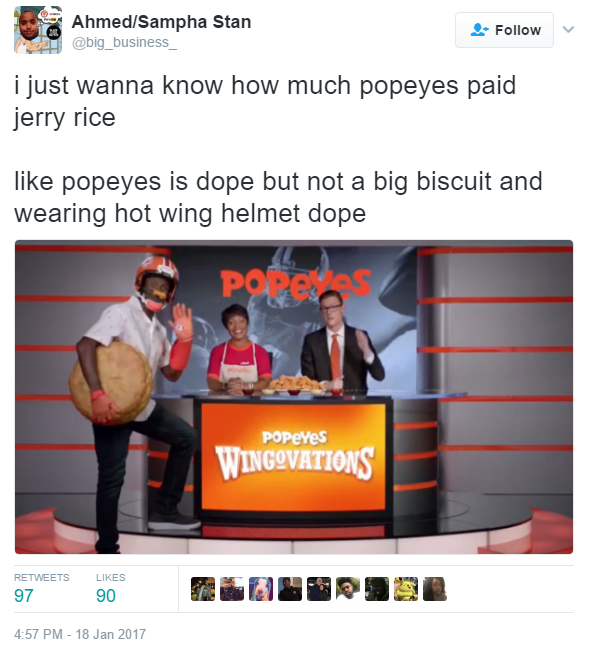 What’s the story with all this animus? Jordan Heck of The Sporting News informs us that “This obviously plays in to the “black people like fried chicken” stereotype, and it angered a lot of people.”

Some of it is also the result of Rice taking a couple of positions the Perpetually Outraged don’t care for – namely, that his response to #BlackLivesMatter was to say all lives matter, and that he ripped Colin Kaepernick for his disparaging antics toward the national anthem. Rice was, of course, a superstar for the 49ers for most of his career – he probably earned the right to have an opinion on the way Kaepernick represented his team.

Because of that he was already an Uncle Tom to some of these people, and for daring to make funny fried chicken commercials he’s apparently fair game for all the abuse they can heap on him.

And now I’m going to put on my outraged hat, because as a native New Orleanian who grew up down the street from Al Copeland and have patronized the restaurant chain he founded for pretty much all of my 46 years on this planet, I’d like to know – who are these people laying claim to the right to be outraged because Popeye’s has a highly-accomplished black celebrity having some fun in their commercials?

Black people are not the only ones who eat Popeye’s, or fried chicken in general. Anybody who thinks that is completely out of touch and needs a reality check – and probably a trip south of the Mason-Dixon line. Fried chicken is a Southern thing far more than it’s a black thing; anyone from the South can tell you this and most of us are quite a bit surprised at the idea there is some racial component to the appreciation of fried chicken. If anything, fried chicken is something which brings black and white people together in this part of the world; we all appreciate the hell out of it when it’s done correctly, and Popeye’s is without question an example thereof. We surely have heard the “black people like fried chicken” business, just like we’ve heard the “black people eat watermelon” stuff; nobody here takes any of that seriously. White people in the South eat the hell out of watermelon when it’s 90 degrees outside just like black people do.

So if Jerry Rice wants to sell me fried chicken, I’m on board with it. If he’s doing it with a sense of humor, so much the better. Show me the rednecks outraged when Terry Bradshaw makes self-deprecating and clownish commercials twice a year or more. I’m sure they’re out there somewhere…right?

As for the idea that Rice is some minstrel-show performer in these “racist” ads, what utter nonsense. Do any of these hypersensitive bitches notice that the person in charge in all of these Popeye’s ads happens to be a quite intelligent and seemingly expert black woman? Where is the recognition of that fact?

Someone has taught these fools that it’s OK to complain about everything, and that the more emotional and unhinged they act the faster someone will come along to grovel for them. Here’s hoping Jerry Rice and Popeye’s hew to the old maxim “F ’em if they can’t take a joke.” The chicken is good, he’s funny in the ads, I’m having Popeye’s for lunch tomorrow and they can go straight to hell.