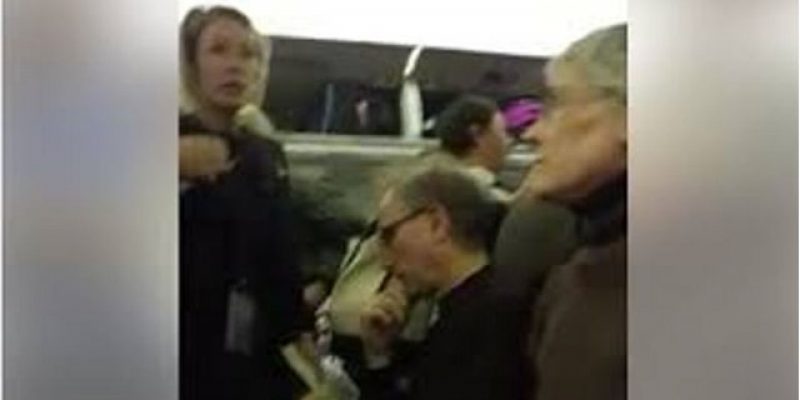 …then we can help with that. 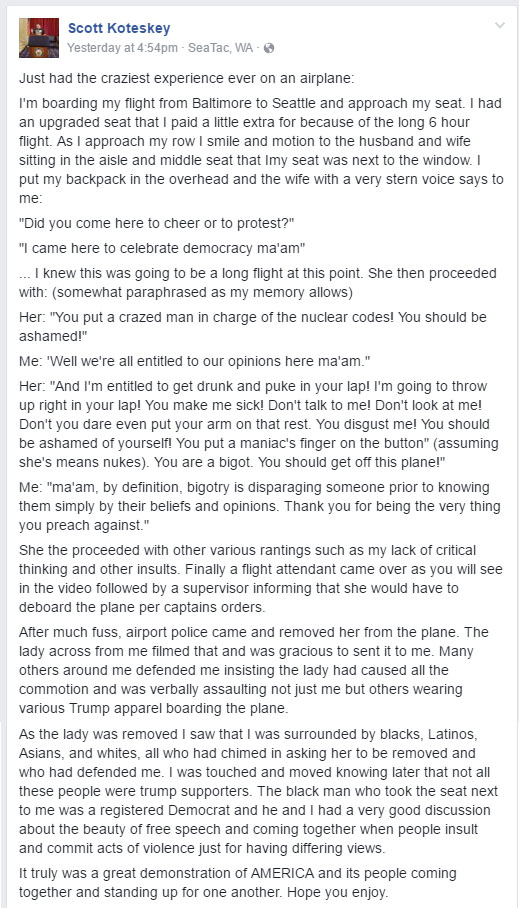 Here’s the video shot by the man being berated by this woman when the airline fight staff intervened and asked her to get off the plane. At the end is the video the lady across the aisle shot of the police coming onto the plane and making her leave after she refuses the instructions of the flight staff.

And here’s another video of the expulsion, courtesy of Milo Yiannopoulos…

I posted this on Facebook earlier this evening, but what’s most striking about the scene this woman put on before she was thrown off the plane is the behavior of her husband, who’s going to Seattle because his mother has just died. Namely, that he doesn’t behave at all but instead just sits there, pathetically, as his unhinged wife goes absolutely barbaric in front of a planeful of horrified passengers.

What kind of a man just sits there amid this incivility? She’s attacking a total stranger over the fact he attended a presidential inauguration, and he’s not embarrassed enough at her behavior, or cognizant enough of he fact he’s going to be put off that plane thanks to her antics, to lean in and tell her to stop? He’s just going to sit there?

You simply cannot get more beta-male than this. It’s sickening. The wife is thoroughly repugnant, but the husband’s inaction is what’s doubly depressing about this episode.

And this leftist incivility, which was in full flower at the various Women’s Marches around the landscape on Saturday, has to stop. It has already played a large role in Donald Trump being elected president, because normal people have greatly soured on social justice warriors and their contempt for those who don’t share their politics, and rather than being chastened by that lost election into a much-needed degree of introspection they continue to lash out against the normals.

So far that’s not produced a backlash in kind, or worse. But that won’t continue forever. If these attacks don’t stop you’re going to have fistfights and worse. People won’t put up with this for much longer.

It’s time for the Left to start policing its own, like it’s time for that husband to exercise some degree of adult supervision on his atrocious termagant of a wife.

Interested in more national news? We've got you covered! See More National News
Previous Article One Of Obama’s Final Leave-Behind Regulatory Attacks On America Is A Middle Finger To Hunters And Fishermen
Next Article CROUERE: Trump’s Transition Team May Have Been The Most Successful In American History