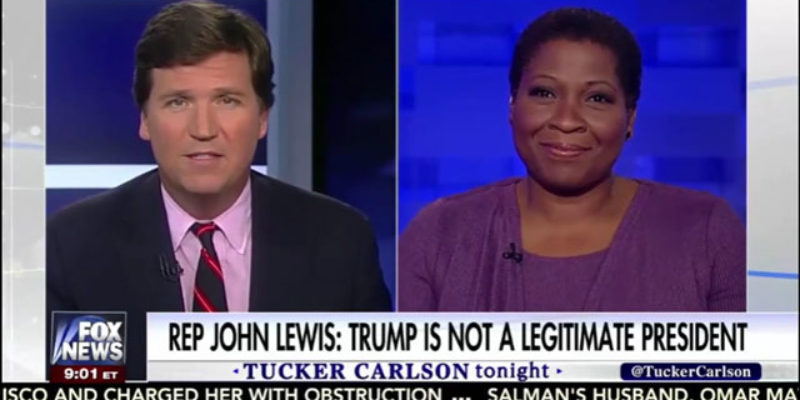 We’ve generally ignored most of what this clownish woman says as a product of what could be called slanted journalism by Fox News – she’s the kind of spokesperson Republicans would enthusiastically endorse to represent Democrats and the Left, because by trotting her out to spout stupidities in debates with some of the best minds in the conservative movement tends to lead to a Harlem Globetrotters-vs.-Washington Generals result. Kind of like when CNN used to have Robert Novak and Pat Buchanan represent the Republican point of view on the old Crossfire show – rhetorically Buchanan and Novak held their own just fine, but both of them were unsexy old white guys with bad hair and optically it was obvious they were on air for a reason.

So the Jehmu Greenes and Sally Kohns of the world get cast on Fox News to come off as morons and make conservatism look like the only sensible position. If you’re looking for an explanation why Jehmu Greene is paid to sound like an unhinged fool on TV, that’s as good as any.

Here’s the problem with that thought, though – that’s not actually what Jehmu Greene represents in the Democrat Party now. It turns out she’s actually a major candidate for the chairmanship of the Democrat National Committee.

We struggle with the concept that anyone will actually vote for her, as her resume is pathetic. It actually makes back-bencher congressman Keith Ellison, the purported one-time frontrunner for the job whose only apparent qualifications are that he’s black and Muslim, look like a statesman by comparison. Greene has held a number of do-nothing positions on non-profit and political organization boards and she’s been involved in losing a bunch of elections (when you’re Southern Political Director at the DNC from 1998-2000, in which an entire region essentially turns away from your party once and for all, you’d more expect to be put out of politics than given control of the entire party); at least Ellison is a member of Congress.

And yet over the weekend Greene decided to mount a run for the top job at the DNC.

There are a number of candidates for the job beyond Ellison – South Carolina Democratic Party chairman Jaime Harrison, New Hampshire Democratic Party chairman Ray Buckley, Labor Secretary Tom Perez, Idaho Democratic Party executive director Sally Boynton Brown, and South Bend, Indiana mayor Pete Buttigieg have all thrown their names into the mix. Most have laid more groundwork than Greene has. Ellison, Harrison and Greene are black and Perez is Hispanic; the others are white.

And as Tucker Carlson touches on in the interview below, Greene’s friend and former Bernie Sanders spokesperson Symone Sanders (no relation to the Senator) said that “we don’t need white people running the Democratic Party right now.” Which would, if that advice was taken, place Greene in the final four. Perez at least was the Labor Secretary, though his ideological views make Lenin look like Bob Dole. Harrison might not be the radical that Perez, Ellison and Greene are, but while Sanders praised his “party-building” Democrats haven’t won a major election in South Carolina since before Harrison took his current office in 2013; that and his resume as a lobbyist for Tony Podesta doesn’t make him look like much of a winner.

As this 13 glorious minutes of abject on-air evisceration shows, using race as a primary qualification for the job of DNC chair is a great idea…if you’re a Republican. Jehmu Greene couldn’t run a waterfall. Put her in charge of that party and she’ll do for Democrats nationally what she did for Democrats in the South from 1998-2000.

We know she isn’t going to get that job. We know it because we haven’t lived quite well enough to deserve that level of hilarity.

Interested in more national news? We've got you covered! See More National News
Previous Article The Jindal Gang Has Broken Up For Good
Next Article The Hyperloop The LSU Engineering Students Are Working On Is More Interesting Than JBE’s Passenger Choo-Choo