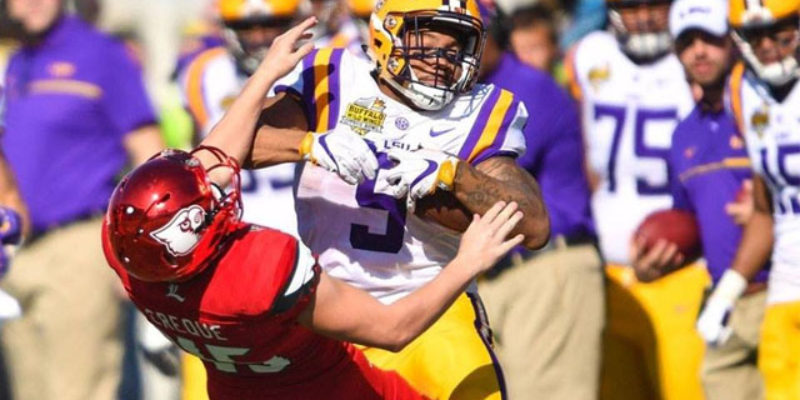 Let’s call this a public service performed by some guy with a YouTube channel, because it’s going to come in very handy over the next eight months when there’s no LSU football on a Saturday. The hero in question did a close-edit job on the TV broadcast of the game, chopped out all the commercials and a whole lot of the time between plays, and condensed the entire thing into just under 29 minutes of video…

Watching that game on Friday, it was hard to understand how LSU could possibly have finished the season 8-4. Particularly given the pedestrian, or worse, performances of the four teams LSU lost to. Alabama outlasted Washington, but not in any particularly impressive fashion, Florida’s defense played well enough to beat a bad Iowa team with no particular help from its offense, Auburn was atrocious last night against Oklahoma and Wisconsin struggled mightily against Western Michigan.

In those four games, plus the Citrus Bowl victory over Louisville which represented the five games LSU played against ranked teams this season, the Tiger defense gave up a grand total of three touchdowns.

You’re not supposed to give up three touchdowns in five games and lose four of them. That’s almost impossible to do, and yet LSU is 8-4 to close the 2016 season.

There is reason to believe the 2017 team will fare better, even if there are six games on the road (five of which will be against SEC opponents, thanks to the Florida rescheduling mess). LSU will have the bulk of the offense that played against Louisville back, minus Ethan Pocic, John Boutte, Colin Jeter, DeSean Smith and Travin Dural and probably Malachi Dupre, who hasn’t said whether he’s going pro yet, and there is no doubt Matt Canada will improve the utilization of the skill talent on that offense. Even in the Citrus Bowl it was worth questioning whether D.J. Chark, for example, was getting all the touches he should.

LSU will have four returning offensive linemen who started multiple games in 2016, plus a few others with considerable playing time. They’ll have two senior quarterbacks back, to go with four underclassmen fighting for time in an open battle. Derrius Guice returns, and should be put forth as a serious Heisman candidate. And even without Dupre, a receiving corps led by Chark and containing youngsters dripping with talent like Drake Davis and Dee Anderson should be more than capable of keying an improved passing game. Canada did wonders getting tight ends and fullbacks involved in the offense at Pittsburgh and he’s going to have quality veterans to work with in Foster Moreau and J.D. Moore. It should be a plenty explosive enough offense to be able to win more than one game in five when ranked opponents score one touchdown or less.

Yes, LSU is losing Lewis Neal and Davon Godchaux, Kendall Beckwith and Duke Riley, Tre’Davious White, Jamal Adams, Dwayne Thomas and Ricky Jefferson. Those losses are real, and it should be no surprise if all seven land on opening-day NFL rosters in September. In the case of Beckwith and Jefferson, though, due to injuries LSU has already found some frighteningly-good replacements in Devin White and John Battle, both of whom played lights-out football against Louisville. Rashard Lawrence has shown flashes of being an ample replacement for Godchaux, while Christian Lacouture will be back after missing the 2016 season with a knee injury to replace Neal. Donnie Alexander, who will likely replace Riley, has done more through his junior year at LSU than Riley had prior to having a breakout senior season. And while finding replacements for White and Adams, who both project as first-round picks, would be challenging for any team, nobody in the country has recruited defensive backs as well as LSU has over the past two years; there will be massive battles in spring and fall camp to produce starters in the secondary to go with Battle and Donte’ Jackson.

And given that Dave Aranda is coming back, LSU’s defense will be one of the best in the country almost regardless of who’s playing. Aranda is that good – he had to replace Beckwith to face a Heisman winner and he held a Louisville team averaging 45 points and 558 yards per game to nine points and 220 yards.

We’re interested to see how LSU closes out its recruiting class, which is already very good and has the potential to be legendary, though it might be difficult to finish higher than fifth in the recruiting rankings. And we’re also interested to see what Ed Orgeron does with his coaching staff, as there are lots of rumors around that turnover, particularly on the offensive coaching staff, is just around the post-signing day corner. Wide receivers coach Dameyune Craig appears headed to Oregon to take over as the offensive coordinator, and word has it that Orgeron might be bringing in Chicago Bears receivers coach Curtis Johnson, a New Orleans area native who held a similar position with the Saints for much of the Sean Payton era before taking over as head coach at Tulane, to replace him.

But those are items for idle speculation right now, as is most everything else surrounding LSU football. Which is why the video of the Louisville beatdown could be a 29-minute respite from the offseason. Feel free to apply as needed.