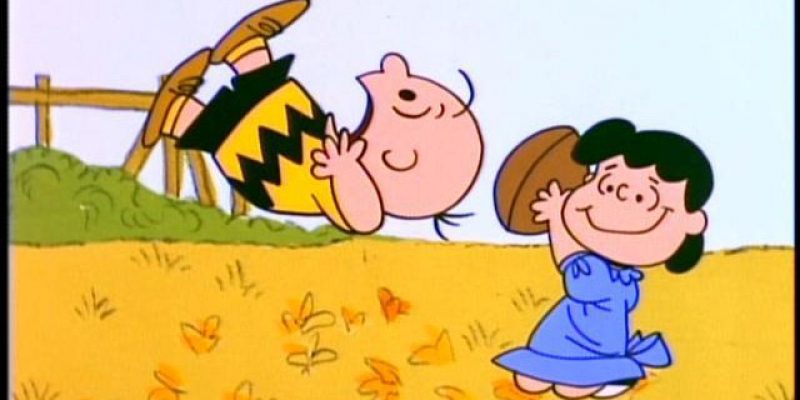 Charles M. Schulz, the creator and lead illustrator for the Peanuts cartoon for fifty years, passed away in 2000 at the age of 77. He was an American icon in his industry, serving as a respected mentor and inspiration for countless cartoonists and illustrators to follow. His wholesome and charming Peanuts stories were quite popular and retained a large audience, with Peanuts at one point running in over 2,600 papers and 21 languages across the world.

Just before his death seventeen years ago, he gave an interview about his life and career. In this televised conversation, the impressiveness of his talents and the quality of his character and moral fabric showed clearly through. He was a kind man who experienced great success and took his role in entertaining and guiding the youth of America very seriously for several decades.

In this last interview, he was asked if he regretted not allowing Charlie Brown to finally kick that football being held by Lucy in the final Peanuts comic strip. Choking back tears, he emphatically stated that he did regret it, saying, “You know, that poor, poor kid, he never even got to kick the football. What a dirty trick — he never had a chance to kick the football.”

While this game between Lucy and Charlie Brown has been going on for decades, the symbolism remains the same. Charlie Brown is looking for his chance to play and a chance to find pride in his hard work. Pulling the football away wasn’t fair for Charlie Brown in that comic strip and it’s likewise not fair to take opportunities away from other children in the real world.

The Louisiana real world version of this scenario is playing out in the court system as we speak. A group of adults are desperately trying to use the legal process to rip away a great opportunity from a large number of Louisiana children.

Roughly 78,000 children are enrolled as students in Louisiana’s 145 charter schools. Louisiana’s largest teacher union is currently in court trying to convince a judge to cut off funding for 16,000 of these children enrolled in 32 of those charter schools around the state. The basis for this suit has nothing to do with what is best for charter school students, their teachers and their parents – it is simply about union leader efforts to get access to more public dollars and lessen parental control of a child’s education.

These union leaders want education dollars to belong to certain buildings and the bureaucracy that has controlled them for years. Charter school teachers and advocates want the parents of all children to have the opportunity to decide the best educational option for their child. As more and more low-income parents choose charter education in this state, the union leaders are now trying to use the court system to cut off funding to these schools instead of rising to the challenge of this new competition and focusing on improving their services.

Each year the state spends billions of dollars in taxpayer money to help educate children. Last year the state’s k-12 education funding formula, known as the MFP, totaled over $3.6 billion. While the amount of funds spent each year in Louisiana is comparable to other southern states, the academic results for our children have been sub-par for decades. Additionally, the ability of these dollars to flow directly to classroom instruction has been diluted over the years due to increasing guaranteed pension cost obligations. It is those increasing pension costs that are eating up local school budgets and which likely serve as the largest motivation for the union lawsuits to cut off charter funding.

Louisiana should follow the lead of other states who have made moves toward reforming these outdated pension systems, in order to make them more affordable and sustainable for families. Instead of this logical approach, we find that union leaders have chosen to go after the dollars being used by many low-income parents and students trying to pursue a better education. Once union leaders accomplish this task, they will most certainly advocate that these dollars be used to subsidize these outdated programs, leaving children in the lurch.

Late last week, the 1st Circuit Court of Appeals thankfully issued a stay in this case – preventing the parents who have chosen one of these 32 charter schools for their children from having the football immediately ripped from their grasp. The Louisiana Supreme Court will be asked to make the final determination and that ruling will have enormous ramifications on the choice-driven educational system in Louisiana that is beginning to benefit countless families across this great state.

The questions are clear: Who will control the football? Will it be the parents who want and deserve the ability to choose the best public educational option for their child? Will it be the union leaders who need control of public education dollars to backfill their unreformed programs and chase away charter options in this state?

Unfortunately, instead of a collaborative process between all stakeholders to decide this policy, the union leaders have decided to go to court.

Thus, the football is now in the hands of the judicial system. 16,000 kids are running full steam towards it, ready to kick off another year of public education in a school of their choosing. Once the final gavel comes down, will the ball still be there for these kids or will they all run towards the goal excitedly only to slip and end up flat on their backs?

Hopefully, the union leaders will see the error of their ways and remove this harmful lawsuit before it is too late. If that doesn’t happen, the job will fall to the judicial system to help Louisiana avoid the same feeling of regret, which so visibly distressed Mr. Schulz.

On behalf of the parents trying to give their kids the best education possible, I submit a respectful plea to these union leaders and the court system to avoid playing the role of Lucy. Give those kids a chance. Let them kick the football of their choosing.

Interested in more news from Louisiana? We've got you covered! See More Louisiana News
Previous Article KENNEDY: DHH And Dr. Gee Need To Do Their Jobs
Next Article Mitch Landrieu’s and JBE’s New Plan To Fight Crime In New Orleans Is Every Bit Of A Joke As You Would Expect